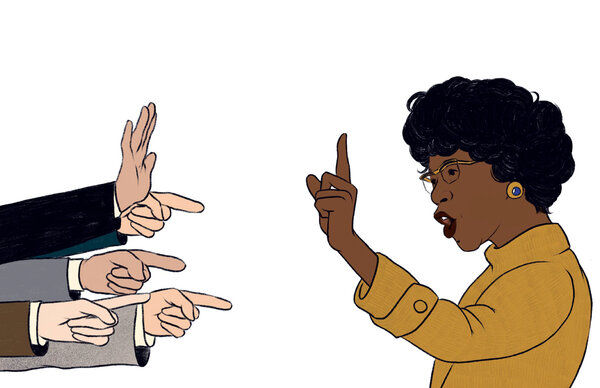 SHIRLEY CHISHOLM IS A VERB!
Written by Veronica Chambers
Illustrated by Rachelle Baker

Verbs are words about “doing,” Veronica Chambers explains at the beginning of “Shirley Chisholm Is a Verb!” “Verbs are words that move the world forward,” as did Congresswoman Chisholm, a daughter of immigrants and the first African-American, and first woman, to make a serious bid for the Democratic presidential nomination. She believed that “service to others is the rent you pay for your room on earth.” Instrumental in the creation of programs like Head Start and W.I.C. (which assists women, infants and children in need of food) and the formation of the Congressional Black Caucus, Chisholm felt strongly about making room for others. Just as Chambers’s words highlight a life punctuated by movement, Rachelle Baker’s illustrations render Chisholm as a “doer,” too, through expressive, determined lines and gestures. On almost every page, verbs such as speak, improve, listen, create and do, in teal capital letters, pop against a white background, illuminating the vision and drive of this woman who pushed against and cracked glass ceilings. Though a timeline would have enhanced our understanding of how she lived each day as a voice of “the people of America,” “Shirley Chisholm Is a Verb!” succeeds as an inspirational exploration of what it means to be a true woman of action.

Nikki Grimes writes in a similar vein of the vice president-elect: “Kamala was like clay her parents molded for action.” Framed by a mother’s encouragement of her young daughter after a boy at school tells her that she can’t become president, “Kamala Harris: Rooted in Justice” unfolds as a road map to how anyone can try for the job through hard work, dedication, caring and confidence. Raised by immigrant parents on civil rights marches, lectures by Martin Luther King Jr., readings at a local cultural center by James Baldwin and Maya Angelou, and Nina Simone’s “gravelly voiced version” of “To Be Young, Gifted and Black,” Harris learned early what it looked like to fight for freedom and speak out against injustice. This focused spirit is evident in a poignant exchange between baby Kamala and her mother, beautifully captured by Grimes: “‘What do you want, little girl?’ she asked. ‘Freedom!’ said Kamala, and a waterfall of laughter sputtered from her mother’s mouth.” Through bold, bright colors juxtaposed against the ethereal-blue shadows of those who came before, Laura Freeman’s illustrations complement Grimes’s text, with subtle nods to Harris’s roots in India, Jamaica and America. “Kamala Harris: Rooted in Justice” is an enlightening and, at times, lyrical portrait of a woman whose life has always been about advocating for others.

NORTHBOUND: A TRAIN RIDE OUT OF SEGREGATION
Written by Michael S. Bandy and Eric Stein
Illustrated by James E. Ransome

Five years after Michael S. Bandy, Eric Stein and James E. Ransome collaborated on “Granddaddy’s Turn: A Journey to the Ballot Box,” they’ve come together again to show how Bandy’s first train ride in the early 1960s from Alabama to Ohio opened his eyes to the unfair barriers created by segregation. Through Ransome’s detailed and richly expressive watercolors of the lush fields and “glittery” cityscapes the passengers see as day turns into night, readers hear the chug of the train and feel its rumblings under their feet as Michael sets out to explore, only to be halted by a “WHITES ONLY” sign separating him and the other Black passengers from the rest of the train’s offerings. Bandy and Stein give an intimate and affecting account of how segregation plays out in the everyday lives of two new friends — one Black, one white — who find companionship when the signs between cars come down as the train reaches Atlanta. Soon they’re able to discover a dining car, sleeping nooks and each other, all because a city has “some different rules from home.” Back up go the signs when they hit Chattanooga, and back down when they get to Cincinnati. Filled with touching slivers of a budding friendship — sharing plastic green soldiers and even “battle” scars — “Northbound: A Train Ride Out of Segregation” skillfully depicts how even the subtlest aspects of division cannot stand in the way of hope, goodness and friendship.

In “William Still and His Freedom Stories,” Don Tate chronicles the life of a man who understood the necessity of recording the lives of others. Still, the youngest of 15 children, was born free in 1821 to formerly enslaved parents. Many years earlier, his mother had made the wrenching decision to escape with her two young daughters and join her husband up north, leaving their two oldest sons behind in bondage. “Their new life was good, but living ached like an open sore,” Tate writes. This enduring wound, and a night aiding a neighbor hunted by slave catchers, had a lasting effect on young William. At 23, “with $3 in his pocket, and a billion dollars in pride,” Still moved to East Philadelphia, where he worked his way up to manager at the Pennsylvania Anti-Slavery Society and opened his home as a “station” on the Underground Railroad. An unexpected and glorious reunion with one of his long-lost brothers impelled him to write down the stories of other freedom seekers hoping to be reunited with kin. Tate’s vibrant illustrations bring his often spare text alive. With a timeline, an informative author’s note and additional back matter, Tate shines welcome attention on an overlooked figure who, with pen and heart, helped reconnect those whose lives and stories might have been forgotten.

THIS IS YOUR TIME
By Ruby Bridges

Ruby Bridges — who in 1960, at the age of 6, was the first Black child to integrate an all-white school in New Orleans — speaks directly to young readers in “This Is Your Time”: “May my past, my story, inspire you.” To that end, she pairs memories of being escorted to first grade by federal marshals, of the angry mob that rose up against her solely because of the color of her skin, and of the love and support of her white first-grade teacher with accounts of visits during her adult years with a new generation of schoolchildren, who shared their own thoughts on bravery, equality and love. Black-and-white photographs provide a visual timeline of civil rights history, Bridges’ own life and the young peace-seekers of today speaking out around the world against injustice. In closing, Bridges exhorts: “Don’t be afraid. This is your time in history.” Her book is that guiding star, that reassuring hug, that needed call to keep going, keep pushing, keep demanding change.

Leah Henderson’s picture book “Together We March: 25 Protest Movements That Marched Into History” will be published in January.