Margaret means pearl, which is a good name for me.

In the opening pages of Dylan Meconis’s graphic novel QUEEN OF THE SEA (Walker Books, 400 pp., $24.99; ages 12 and up), the young heroine tells us her name and more besides — that she is a small thing, secret and hidden, her true value unknown. It’s one of several metaphors, worked as beautifully and intricately as the embroidery on a Tudor queen’s gown, that signal that all is not as it seems in this captivating coming-of-age story.

Set in a world that is, and is not, 16th-century England, “Queen of the Sea” takes inspiration from the real-life rivalry between Mary Tudor and her sister Elizabeth, showing the devastating consequences such Game-of-Thrones maneuvering has not only on the powerful, but on the powerless. 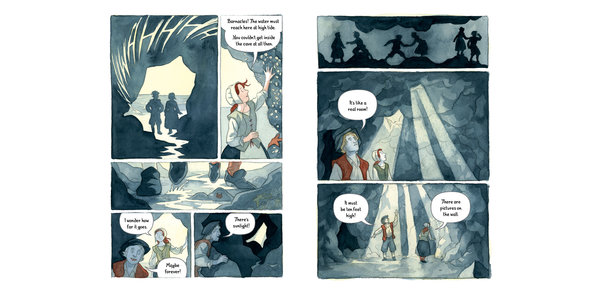 Baby Margaret arrives one rainy day at a convent on an island in the Silver Sea, part of the kingdom of Albion. The nuns take her in and lovingly raise her. Margaret’s days are happy ones, filled with exploration. The ever-present sea whispers its stories of selkies and saints to her, and she grows into a feisty child, honest and good-hearted — but there is a deep sadness inside her, too. She longs to know who her own parents are and why they sent her away. But no one can give her an answer.

Meconis’s drawings, full of heart and humor, beautifully evoke Margaret’s many moods, and the rhythms and routines of life in an island convent. Types of holy orders, the breviary, the differences between saints and martyrs — these topics are an unusual addition to the canon of graphic novels for young readers, but Margaret’s wry descriptions of everything from hand signs used during the nuns’ silent meals, to types of needles and stitches used in their embroidery, to holy relics and even a recipe for really terrible gruel, fascinate. They enrich the reader’s understanding of Margaret’s bygone world, and of Margaret herself.

Childhood, like the island in the Silver Sea, is a realm unto itself, safe in its remoteness, but the things that protect can also confine, and eventually Margaret learns that her paradise is actually a prison for those who have offended the king. Every nun in the convent was once a lady in his court. Each was accused of a treasonous act and banished. Margaret discovers that she herself is a prisoner, forbidden from ever leaving the island.

“Everyone that I loved, every place on the Island I cared for, every answer I had ever gotten to every question I had ever asked — was a part of one huge and terrible lie,” she tells the reader.

Unmoored by this knowledge, Margaret hears something new in the lapping waves — the urgent whispers of the wider world. Things rich and strange wash up on the shore for her to find — a sailor’s shoe, a jewelry box, the huge wooden hand from a ship’s figurehead. And then the sea brings a darker gift — a mysterious young woman and her cruel warder.

The woman is locked away in the convent, and Margaret again wants answers. This time she gets them. The new prisoner teaches Margaret how suddenly, and ruthlessly, fortune can turn a queen into a pawn, and that sometimes the only difference between loyalty and treason is where you stand on the game board. But the most important discovery Margaret makes is about herself, and the place that awaits her in the wider world — if she’s brave enough to take it.

The best graphic novels suggest rather than decree. They allow readers to search for truth in what is shown and said, but to find it in the silence between the words, the space between the images. The beguiling “Queen of the Sea” stands solidly among them.