Lauren Oyler’s “Fake Accounts” is an invigorating work, deadly precise in its skewering of people, places and things. It’s a novel about social media and its insidious creep into our lives, the way it has reconfigured our behavior, relationships and — perhaps most critically, for the ambitions of this book — the way we think about and relate to ourselves.

Most readers will recognize the exhilarations and degradations of online activity that Oyler, describes. These daily sins range from mere procrastination and online stalking to full-fledged impersonation and political derangement. Various platforms — Twitter, Facebook, Instagram, Tinder and its ilk — are present not as texture, but as major motors of character and plot.

But “Fake Accounts” is also the work of a critic who has made a career of studying a much older piece of technology: the book, and in particular, the novel. Her debut is packed with references to contemporary writers, from Ben Lerner to Jenny Offill. My experience of “Fake Accounts” was not a little surreal, because a novel I wrote is the subject of one of these references (a neutral one).

Oyler’s narrative opens at a precise historical moment: the interregnum between the 2016 election and the inauguration of Donald Trump. The nameless narrator discovers that her boyfriend, Felix, has a secret Instagram account, where he posts conspiracy theories and has cultivated something of a following. She resolves to break up with him, but before she does he dies in a bicycle accident in upstate New York. When his mother sends her a little money with no explanation, she decides to move to Berlin, the city where she and Felix met.

Before she decamps for Europe, she meets with a friend and shares her predicament; this friend responds with a detailed summary of a book she’s reading (mine), “a new novel with a plot that resembled my situation.” The narrator says “that it sounded like an interesting book but it made my pain feel less significant.” To which her friend replies, “It actually wasn’t less significant, because the situation in the book was fictional and mine was real.”

What is the point of this interweaving of reference and verisimilitude? Oyler posits books as products of their time — dated, in the way of Instagram posts and tweets, down to the year, or even month. Books are not necessarily elevated above social media, but they are also not eradicated by it. It’s telling that the narrator leaves her job as a blogger to work on a novel, and that “Fake Accounts” doesn’t much bother with an ersatz representation of online activity. Of the novel she is writing, which may or may not be the novel we are reading, the narrator declares: “Why would I want to make my book like Twitter? If I wanted a book that resembled Twitter, I wouldn’t write a book; I would just spend even more time on Twitter.”

Instead, “Fake Accounts” reserves its formal high jinks for more literary fare, including fragmentary novels by female writers, which are dismissed as a “trendy style” marked by “hollow prose.” Still, the narrator is intrigued enough to try it out, and a lengthy section in fragments follows. Even as she lacerates the form, she acknowledges that “I’m not very good at this structure. I keep going on too long.” 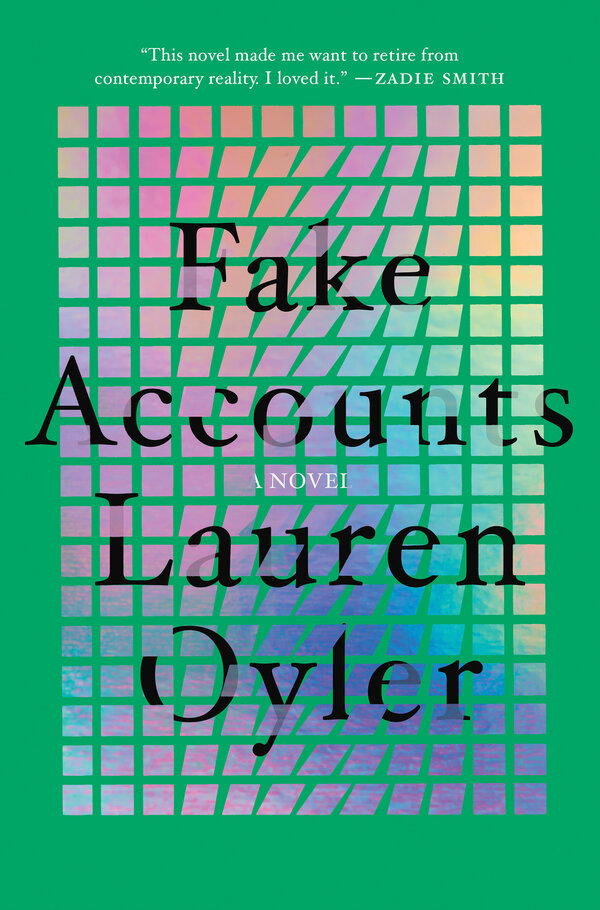 I tended to agree, and was relieved when the novel reverted to Oyler’s more natural strengths as a writer. One of the surprises of “Fake Accounts” is how much its carefully observed comedy of manners is solidly traditional in its novelistic concerns. There’s a whiff of Henry James’s Americans abroad to these pages, and the fictional character I found myself thinking of most often was Emma Woodhouse, whom Jane Austen famously described as “a heroine whom no one but myself will much like.”

Like Emma, Oyler’s narrator teeters “on the border between likable and loathsome” and possesses enormous reserves of intellectual and libidinal energy in search of an outlet. Emma is “handsome, clever and rich”; Oyler’s narrator is also those things, albeit in somewhat lesser form. And perhaps most significantly, she too is fumbling, a little blindly, around the problem of her privilege, which she is aware of but not yet existentially troubled by.

In the wake of the election, she observes that for her “cohort,” the incoming “administration … would not affect them particularly sweepingly” and that in fact, “being a white woman living in Brooklyn began to feel, very briefly, less repugnant; the white women living in Brooklyn, in the end, were ultimately just annoying, point-missing and distracting, not the biggest problem.”

A “somewhat retrograde cynic, a toxic presence,” the narrator armors herself in wit, continually hedging her position and thus her engagement with the political tumult around her. She hesitates to go to the Women’s March “not because I was ideologically opposed to the idea necessarily but because it seemed there would be a lot of pink, which in a feminist context signaled to me a lack of rigor.” Later, she refers to her story as a typical “searching bourgeois-white-person narrative.”

But this cynicism blunts her ability to navigate the world, and her own emotions, with catastrophic results. Her friends tell her she’s “overcompensating for my despair with snark; I didn’t have to be so clever all the time.” What was the point of making jokes, she wonders, “frustrated and teary.” The narrator repeatedly gestures at the limitations of her irony, without necessarily being able to see beyond it.

That sense of entrapment — of not knowing how to relate to the world — is central to the novel. Oyler is such a funny writer that it can be easy to overlook the fact that the underlying tone of her book is extreme disquiet. Irony provides no protection from unease, but is itself a source of it. It becomes clear why the novel takes place in the days after the 2016 election. This period brought the rapid ascent of the alt-right, the proliferation of its language and symbols. Notably, that language was one of plausible deniability, hate expressed under the cover of irony.

At first glance, that particular form of toxic irony seems miles away from the lacerating humor and thrusting intellect of our narrator. But cynicism leaves her vulnerable to misapprehending the world and the people in it — including her very online, conspiracy theorist boyfriend. The reader grasps much earlier than she does not only the final layer of Felix’s betrayals, but also the grim possibility that she fell in love with Felix not despite his deceptions but because of them — that there is an uncomfortable alliance between her “lazy nihilism” and his reactionary online persona.

How do we relate to irony and cynicism in this new age of the alt-right? Stylish, despairing and very funny, “Fake Accounts” doesn’t necessarily provide an answer to this question. But it adroitly maps the dwindling gap between the individual and the world. However much time the narrator spends alone, in her head and online, she is formed by what is happening outside. Eventually, the realization hits: The entire time, the call has been coming from inside the house.