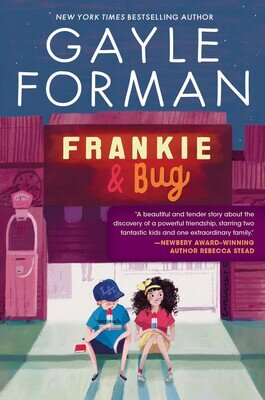 Gayle Forman made her mark in the publishing world with her wildly successful young adult novel “If I Stay,” which was adapted into a feature film. With “Frankie & Bug,” she takes her first swing at writing for a middle grade audience. And she knocks it out of the park.

It’s 1987, and 10-year-old Beatrice (a.k.a. “Bug”) is looking forward to spending her summer at Venice Beach in Los Angeles with her older brother, Danny. Unfortunately, Danny has no interest in babysitting Bug this summer as in years past. He wants his space. Bug’s single mom must work, so Bug resigns herself to spending the summer hanging out in her apartment building being watched by a variety of neighbors, including her mom’s best friend, Phillip, who lives on the top floor. Excitement arrives in the form of Phillip’s nephew from Ohio: 11-year-old Frankie, who has a “kitchen” haircut. At first, Bug is rather disappointed in Frankie because he doesn’t like to swim — there’s literally nothing worse in her book than not liking the beach. Also, Frankie isn’t impressed with California, which is mystifying to Bug.