DARRA ADAM KHEL, Pakistan — This tribal district, located about 85 miles west of Islamabad, is best known for its sprawling weapons bazaar. Walking through it, the sounds of workshop machinery and craftsmen striking hammers become a nearly musical backdrop.

A local book lover, Raj Muhammad, hopes it becomes known as the home of the Darra Adam Khel Library. Located near a gun shop that his father built 12 years ago, the library opened in August, and Muhammad considers it a labor of love as well as a message to the area and the wider world.

“I put books on the top of the gun market, making them superior to guns,” he said. “It’s a step for peace.”

Muhammad, 32, earned a master’s in Urdu literature from the University of Peshawar and worked for a Dubai tourism firm before returning to Pakistan to teach. Uninterested in his father’s firearms business, he opened the library to give people in the area better access to books and education.

It has even caught the attention of the market’s arms sellers. Noor Ahmad Malik, sitting inside his gun shop, has gotten interested in books about India and Pakistan and Islamic history, calling the library the “best thing that happened recently for the people here.” 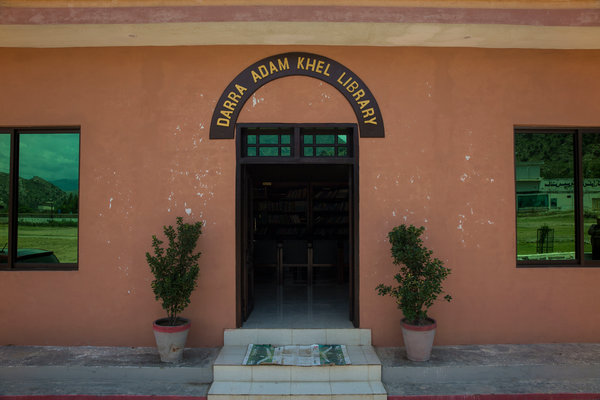 Darra Adam Khel was under Taliban control for years until the Pakistani Army cleared it in 2010. Still, it has been regularly targeted by militants, including a suicide bombing in 2012 that killed 16 people, and mosque attacks in 2010 that killed more than 60. With a population of more than 100,000, it is still largely no-man’s land, where Pakistani law wasn’t applicable until the merger of tribal areas in the neighboring Khyber Pakhtunkhwa province last year.

Now the military is helping Muhammad build a new library that can accommodate up to 65 people, seeing it as a way to help residents recover from years of traumatic violence.

“People are still reeling from the militancy, which has killed hundreds of civilians and soldiers,” said a government official serving in the area, who spoke on the condition of anonymity as he is not authorized to speak with the news media. “They are more prone to fear and stress, particularly among children, and now the availability of books is a good option for knowledge and education.”

Pakistan’s literacy rate is 58 percent among adults, and while there are no official figures for how many people read books or use libraries, they are believed to be low. “The Pakistan public library dilemma is sad,” said Ameena Saiyid, one of the founders of the Adab Festival Pakistan, an annual literary event in Lahore.

The country, she added, “needs a network of public libraries in all cities, so that students and other readers don’t have to buy every book they read. A library system would ensure a core market for publishers and would enable them to provide a steady stream of books to readers.”

Muhammad’s library holds more than 2,500 titles on a range of subjects, including history, politics, religion and Urdu fiction, and he plans to add more books in the coming months. Its most popular title is “The Pathans,” Sir Olaf Caroe’s 1958 history of the Pashtun ethnic group. During a visit last month, Tehmina Durrani’s “My Feudal Lord,” Pervez Musharraf’s “In the Line of Fire” and Michael Wolff’s “Fire and Fury” were on view.

In the nine months it has been open, it has drawn about 240 members, who pay 150 Pakistani rupees, about $1, a year. Thirty members are women, even though Darra Adam Khel is a conservative area where women are not allowed to go outside unaccompanied. They select books using the library’s Facebook page.

One of them is Shifa Raj, Muhammad’s 11-year-old daughter. A sixth grader and avid reader, she helps her father deliver books to the female members of the library.

“I told girls in the school that we have a library in our area: If you are interested, I will provide membership forms,” she said. “The response was remarkable.”

Muhammad considers the Pakistani activist Malala Yousafzai “our pride,” for her efforts to champion education for girls and becoming the youngest Nobel Prize laureate.

“I was born here,” Muhammad said. “I want the world to remember Darra Adam Khel with a good reputation, not for guns but for the books.”