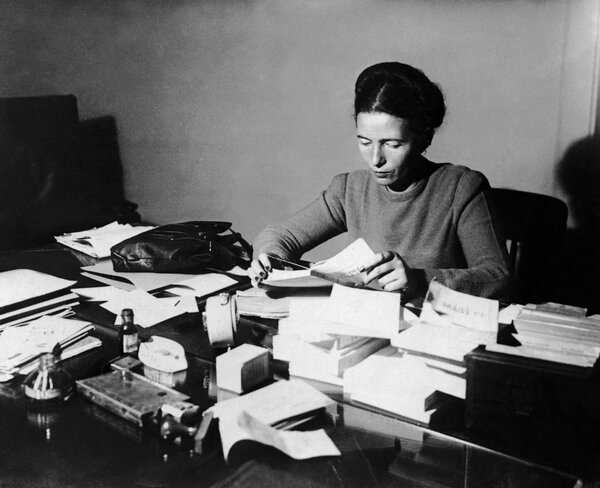 “It’s impossible to read about Simone de Beauvoir’s life without thinking of your own,” the biographer Hazel Rowley wrote in her foreword to the English translation of Beauvoir’s “Memoirs of a Dutiful Daughter.” How did the image of this turbaned Frenchwoman in a severe, 1940s-style suit, sitting beside Jean-Paul Sartre at a table in the Cafe de Flore or La Coupole and writing all day long, become the avatar of a generation?

For it’s true that, at least for Francophile intellectuals coming of age in the wake of feminism’s second wave, the Beaver — a nickname bestowed on the young Beauvoir by a philosopher friend, because, he said, “beavers like company and they have a constructive bent” — casts a very long shadow. Existentialism may have been out of fashion during my student days (ceding pride of place to post-structuralist theory), and few among my contemporaries may have made it all the way through “The Second Sex,” Beauvoir’s two-volume feminist classic, published in 1949, when French women’s right to vote was scarcely five years old. But the famous opening line of that work’s Book 2 — “One is not born, but rather becomes, a woman” — with the liberty implicit in that pronouncement, to shape one’s own destiny in response to circumstances, was something we took radically to heart.

And the kinds of women we hoped to become were deeply influenced by her example: a prodigiously industrious novelist, memoirist and philosopher, allied with Sartre but with the courage to live and love in complete independence, an activist for decades in defense of political, social and emotional freedom. We didn’t so much read Beauvoir; we wanted to be her, to share in her extraordinary life, her intellectual and amorous adventures.

Now along comes “Inseparable,” a short, never-before-published, autobiographical novel written by Beauvoir in 1954, the same year that “The Mandarins” — her 600-plus-page epic about French intellectuals in the immediate aftermath of World War II, seeking and often failing to find reasons to continue living, loving and writing — won the prestigious Prix Goncourt.

Apparently, she showed the manuscript of this brief novel to Sartre, who “held his nose” at it, she writes in “Force of Circumstance,” the third volume of her memoirs. “I couldn’t have agreed more,” she tells us there; “the story seemed to have no inner necessity and failed to hold the reader’s interest.” So she set the manuscript aside.

It is perhaps too easy now to guess what Sartre didn’t like about it. Fluidly translated by Sandra Smith, “Inseparable” makes the case that the defining relationship of Beauvoir’s young life was not with him. Rather, the first of her contemporaries whom she adored, measured herself against, longed for intimacy with and ardently sought to impress was a slight 9-year-old schoolgirl, who sat down next to her one day at the Cours Adeline Désir, a private Catholic establishment for young ladies from “good families” in Saint-Germain-des-Prés.

It’s also possible that Sartre, ever more politically engaged and flirting with Marxism in the 1950s, found in the novel’s up-close-and-personal examination of the yearnings and heartaches of a pair of haute bourgeois French girls, little that would advance the class struggle or the cause of a more just society. If so, he was mistaken.

Beauvoir remained haunted by the story of her childhood friend Élisabeth Lacoin, a.k.a. “Zaza,” returning in both her memoirs and her fiction to Zaza’s passionate nonconformism, her many gifts, her struggle against the familial and societal obligations that hemmed her in on all sides and her tragic destiny. (She died suddenly, at the age of 21.) There is an ethical, and even political, dimension to Beauvoir’s will to remember this friend, through whose mirror she sought to loosen the silken chains binding them both to outdated ideals of femininity.

“Inseparable,” which takes its title from the term teachers at their school bestowed on the pair, as well as from letters Beauvoir wrote from childhood on to her “dear inseparable friend,” is one of several attempts she made to tell the story through the guise of fiction. Andrée, the little girl who sits down in class next to Sylvie, the novel’s narrator, is small for 9. Thin-faced and dark-haired, she comes trailing a whiff of the extraordinary — she had lost a full year of instruction, she tells Sylvie, because of an accident in the country during which, while cooking potatoes over an open fire, her dress had caught fire and her right thigh had been “burnt to a crisp.”

“You don’t meet a little girl who was burned alive every day,” Sylvie muses. From the start, Andrée runs hotter than Sylvie — she is more passionate, more a creature of feeling.

Funny, brilliant, a gifted musician, uncowed by the nuns who teach them, she seems to come from another world, one where the rules of feminine comportment demanded by their milieu do not apply. The two girls vie for first place in class, and Sylvie, the plodder, most often wins, but only because Andrée can’t be bothered to work as hard as she does.

But the freedom that Sylvie initially admires in Andrée — whose coolly elegant mother doesn’t scold her seven children when they overturn furniture at home, or pelt one another with scraps of bread at the dinner table — proves illusory. Andrée is caught in a vise whose grip tightens precipitously later in adolescence, as she approaches marriageable age. “Enter a convent or get married; celibacy is not a vocation,” her mother, descended from a long line of wealthy, militant Catholics, tells Andrée’s sister, who is just a few years older than she is. A pious aunt believes in “love at first sacrament” — the idea that the couple in an arranged marriage fall madly in love at the altar, as soon as they recite their vows.

Sylvie, meanwhile, loses her faith early on and is saved from the obligation to marry when her father, through a series of bad investments, can no longer provide her with a dowry. Instead, she studies in order to earn her living as a teacher, allowing her the independence she craves.

Most disturbing are the ways in which Andrée, who remains fervently devout and unsparingly devoted to her mother, internalizes the destructive impulses of a culture that consumes and constrains her. “Her mother burdened her with chores that she carried out with the zeal of a penitent,” Sylvie notes ruefully.

Readers familiar with Beauvoir’s biography, or with “Memoirs of a Dutiful Daughter,” will know where this is headed. The real-life Zaza’s love affair with the angel-faced, future phenomenologist Maurice Merleau-Ponty — an eminently suitable match, even by the constricting standards of their milieu — was thwarted by her family. She was on the verge of being sent off to Berlin to study for a year, when in a matter of days she developed a raging fever and died. Viral encephalitis, the doctors said. But in Simone’s view, Zaza fell victim to a society bent on killing off whatever was uniquely alive and precious in her.

One is reminded of the death of Beth March in “Little Women” (a book Beauvoir read and loved), or of the saintly orphan Helen Burns in “Jane Eyre,” who accepts her fate with quiet dignity, eyes on the prize of the world to come. Beauvoir’s furious determination to create her own rules for living and loving was forged in this cauldron of loss. Without Zaza, one senses, there might have been no “Second Sex,” no infamous, polyamorous “pact” with Sartre. Simone, at least, would not be sacrificed on the altar of convention and domesticity.

“Inseparable” makes the terms of this commitment on her part crushingly clear. And one wonders, at a time when the Taliban are forcing Afghan women back into their homes, how many Andrées/Zazas still exist around the world, their lives stunted or even snuffed out by organized misogyny. Who, in telling their stories, will bring them to life for us?