Ben Bova was a hard-science guy — and a passionate space program booster — and his visions of the future encompassed a dizzying range of technological advances (and resulting horrors or delights), from cloning to sex in space, climate change, the nuclear arms race, Martian colonies and the search for extraterrestrials. In newspaper articles, short stories and more than 100 books, he explored these and other knotty human problems.

His wife, Rashida Loya-Bova, said the cause was complications of a stroke.

Mr. Bova had a background in journalism and technical science writing, and his work was based in facts. He was determinedly not a fantasy author.

“Ben Bova is the last of the great pulp writers,” Gerald Jonas wrote in The New York Times in 2004, reviewing “Tales of the Grand Tour,” a collection of his short stories about exploring the solar system. “Not for Bova the ambiguities and excesses of cyberpunk rage, nanotech noodling or quantum weirdness,” he continued. “His characters resemble elements in the periodic table, clearly defined by a few well-chosen traits.”

"Reading Bova,” Mr. Jonas concluded, “you are always aware of solid ground beneath your feet — even when the protagonist is an alien life form swimming in Jupiter’s world-girdling, 5,000-kilometer-deep ocean.”

(Mr. Bova also often pondered the possibilities of sex in zero gravity. In one article, he proposed, as he put it, “an advertising slogan that an orbital honeymoon hotel could use: If you like water beds, you’re going to love zero gee.”)

But it was his role as editor of Analog magazine that made him beloved in the science fiction world, now a sprawling community but a bit smaller in 1971, when he took over after the death of John W. Campbell, the magazine’s celebrated editor. 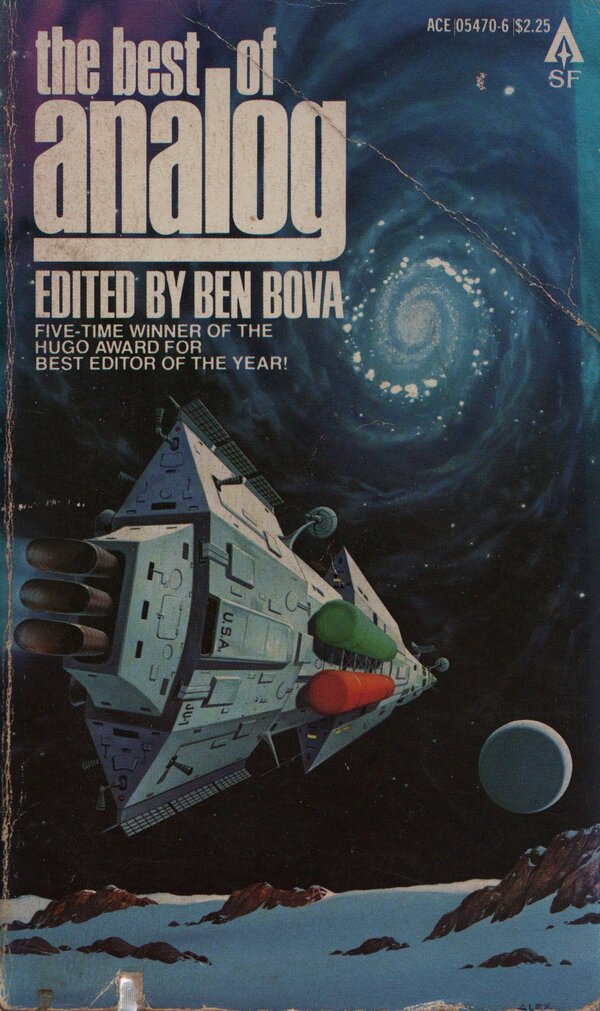 Analog was the latest incarnation of Astounding Science Fiction, the paperback-size pulp magazine that began in 1930 and ignited the careers of Isaac Asimov, Robert Heinlein, L. Ron Hubbard (the founder of Scientology) and others from the so-called golden age of the genre, which ranged from the late 1930s to midcentury, according to Alec Nevala-Lee, author of the 2018 book “Astounding: John W. Campbell, Isaac Asimov, Robert A. Heinlein, L. Ron Hubbard, and the Golden Age of Science Fiction.”

“Without him, I cannot say for certain I would have had a career at all,” Mr. Martin wrote on his blog when Mr. Bova died, noting that many of his stories were published and edited by Mr. Bova. In 1978, when Mr. Bova left Analog to run Omni magazine, a glossy science fiction publication started by Kathy Keeton and Bob Guccione of Penthouse, Mr. Martin went with him.

In 1978, Analog published an issue consisting entirely of work by female writers. But he was not always a champion of women in the gender wars, which at the time were particularly fraught in science fiction, long a male-dominated field. At a convention in 1980, as The New York Times reported in 1982, he said that women had not “raised the level of science fiction a notch,” adding, “Women have written a lot of books about dragons and unicorns, but damned few about future worlds in which adult problems are addressed.”

Colleagues say that remark was out of character, and note that Mr. Bova promoted the careers of a number of young female science fiction editors.

“He was seriously interested in the future,” said Robert Silverberg, a science fiction writer who contributed to Analog. “Science fiction wasn’t just a literary venture for him.”

Benjamin William Bova was born on Nov. 8, 1932, in Philadelphia, the oldest of three children. His father, Benjamin Pasquale Bova, worked in a tailor’s shop; his mother, Giove (Caporiccio) Bova, was a homemaker.

Ben graduated a year early from South Philadelphia High School, which in 2015 inducted him into its Hall of Fame. He earned a degree in journalism from Temple University and a master’s in communication from the State University of New York at Albany; in 1996, he received a Ph.D. in education from California Coast University, an online program.

Early in his career, Mr. Bova was a newspaper reporter and editor and a technical writer and editor for Martin Aircraft, where he worked on Project Vanguard, the first American artificial satellite. He was later a marketing manager at Avco-Everett Research Laboratory in Everett, Mass., where “hot air specialists,” as he described his colleagues, provided research on lasers and high temperature gases for the Air Force and built heat shields for the Apollo modules.

Mr. Bova was a science adviser to various film and television productions, including “Sleeper,” Woody Allen’s futuristic 1973 comedy, although he was uncredited — a job he took, Mr. Nevala-Lee said, after Isaac Asimov turned the job down.

In 1970, Mr. Bova and his fellow science fiction author Harlan Ellison wrote a short story about a robot police office set in the not-too-distant future. “Brillo,” as they titled it, was also part of a pitch they made to Paramount Pictures for a series based on their tale. When a show called “Future Cop” appeared on ABC, Mr. Ellison sued, winning a judgment of $337,000 and using some of the proceeds to put up a billboard across from Paramount’s offices in Hollywood that read, in part, “Don’t Let Them Steal From You.”

For his work as an editor, Mr. Bova was awarded the Hugo Award six times by the World Science Fiction Society. He taught science fiction at Harvard University and the Hayden Planetarium in New York City. In 2005, he received a lifetime achievement award from the Arthur C. Clarke Foundation “for fueling mankind’s imagination regarding the wonders of outer space.” He was president emeritus of the National Space Society and the Science Fiction Writers of America.

His marriage to Rosa Cucinotta ended in divorce. He met his second wife, Barbara Berson, a literary agent, at a science fiction convention. They clicked, their son Ken recalled, when she told Mr. Bova, “I grok you” — an expansive neologism familiar to both Robert Heinlein fans and counterculture boomers. She died in 2009.

In addition to his wife, Ms. Loya-Bova, and his son Ken, Mr. Bova is survived by two other sons, Michael Bova and Seth Warren Rose; two daughters, Gina Bova and Elizabeth Bova Osborne; his sister, Barbara Brusco; and several grandchildren.