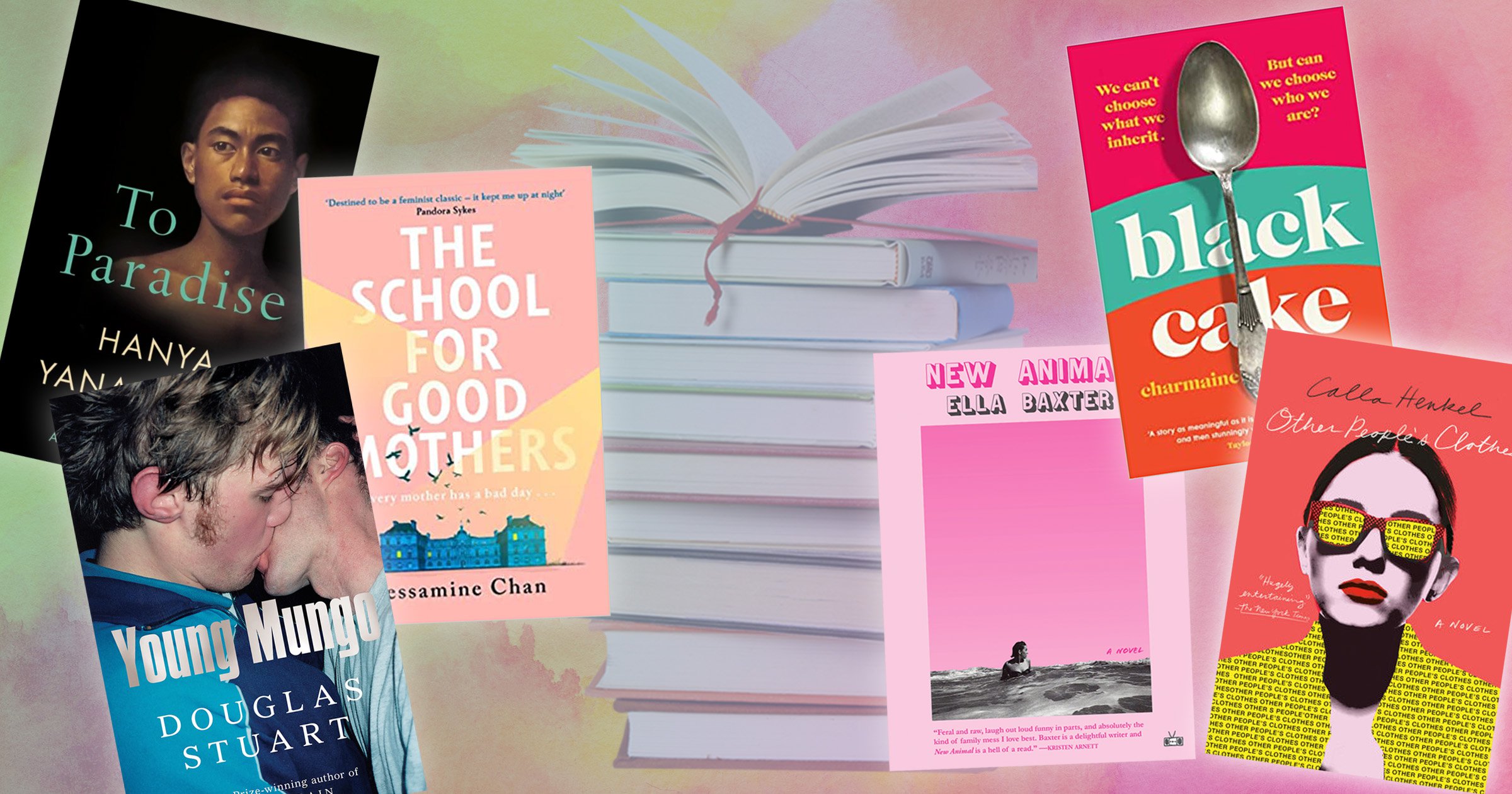 It’s safe to say that 2022 is shaping up to be a great year for new books.

Whether you’re attempting to replace mindless scrolling time with reading, planning to undertake the ‘read a book a week’ challenge, or are just looking for some inspiration, there are some incredible upcoming releases to add to your ‘TBR’ (to be read) pile.

There’s an amazing selection of both fiction and non-fiction books that we can’t wait to read this year. So many, in fact, that it’s tough to narrow it down.

But we’ve tried – read on for our front runners…

His second novel, Young Mungo, is set toaddress similar themes to Shuggie Bain – with the same power to get under your skin, and leave you thinking about it for days, weeks and months after.

It’s been described as: ‘An extraordinary, page-turning second novel, a vivid portrayal of working-class life and a highly suspenseful story of the dangerous first love of two young men: Mungo and James.’

Wahala by Nikki May

Soon to be adapted into a BBC TV series, Wahala tells the story of Ronke, Simi and Boo – three mixed-race friends living in London.

Now in their thirties, the women are navigating where life has taken them – and where they want to be. When a ‘glamorous’ friend comes back in to their life, and is driven to commit a shocking crime, they are forced to address their past.

It’s been described by Penguin as: ‘Explosive, hilarious and wildly entertaining, this razor-sharp tale of love, race and family will have you laughing, crying and gasping in horror. Fearlessly political about class, colourism and clothes, the spellbinding Wahala is for anyone who has ever cherished friendship, in all its forms.’

To Paradise by Hanya Yanagihara

Following up on her classic A Little Life, Hanya Yanagihara’s new novel has been described as a ‘masterpiece.’ A story that covers three centuries, at over 700 pages long, the book is in three distinct parts.

To Paradise starts in New York in 1893, where history has been re-written and people may love whoever they want (or so it seems). We’re then transported to 1993 Manhattan, as the city struggles with a health epidemic, presumed to be AIDS. The final section of the book takes us to America 2093, in a dystopian country ravaged by pandemics.

Destined to be one of the most talked about books of 2022, the novel addresses wealth, love, family class, race and power – and the cost of the search for a better world.

Penguin Random House says: ‘To Paradise is a novel of marvellous literary effect, but above all it is a work of emotional genius.’

(Dis)connected: How to stay human in an online world by Emma Gannon

Emma Gannon, bestselling author of Ctrl, Alt; Delete: How I Grew Up Online and Olive, is a highly relatable writer, who regularly commentates on what it’s like to be a millennial today – with all of the expectations of online life that comes with it.

In her latest offering, she is exploring the dangers of living our lives on the internet – and why more of us than ever now want to log off.

The blurb reads: ’A year of lockdowns, Zoom meetings and reduced physical contact has made us more dependent on the internet than ever before – but has it lost its humanity?

‘Our focus on community and real connection has been sent off-course and we’re becoming more aware of how the algorithm manipulates us and how our data has made us a product to be sold.

‘So, where do we go from here and how can we get back on track?’

An all-round good egg, George Monbiot is someone we should all be listening to – and reading. His stark warnings about climate change and the environment make sense, in a world where it can be hard to know what to believe.

In his latest book, he’s asking why millions still go hungry, despite us pillaging the Earth relentlessly?

Throughout, he questions the failing food systems of the 21st century and explores the various innovations that could help to solve one of the world’s most persistent problems.

Penguin says: ’Farming is the world’s greatest cause of environmental destruction – and the one we are least prepared to talk about. We have ploughed, fenced and grazed great tracts of the planet, felling forests, killing wildlife, and poisoning rivers and oceans to feed ourselves. Yet millions still go hungry.

‘Now the food system itself is beginning to falter. But, as George Monbiot shows us in this brilliant, bracingly original new book, there is another way.’

The School for Good Mothers by Jessamine Chan

A book about motherhood set in a dystopian reality (with definite Handmaid’s Tale vibes), this novel follows Frida Liu, a mother and wife to a man who won’t give up his mistress.

And, in this world, the Government is watching mothers, like Frida, closely – keeping a close eye on anything that could be seen as a misdemeanour, whether spending too much time on your phone, to allowing your child to walk somewhere alone.

Now, one lapsed moment of judgement has led Frida to being potentially admitted to a Big Brother-like institution that measures the success or failure of a mother’s devotion.

Notes on Heartbreak by Annie Lord

Starting with a break-up, Annie Lord’s memoir is a love story in reverse, that revisits moments from the past – from the first days of falling in love, to the things that ultimately lead to a relationship breaking down.

Annie’s writing is always incredibly relatable and funny, and this book will speak to anyone who has ever suffered a break-up, experienced rebound sex, been ghosted or felt jealous of an ex’s new flame…

Hachette say: ‘It’s a book about the best and worst of love: the euphoric and the painful, the beautiful and the messy.’

Other People’s Clothes by Calla Henkel

When strange things start happening in their apartment, the girls become convinced that Beatrice is using them as inspiration for her next novel – and decide to try to beat her at her own game.

But, you guessed it, things spiral and get dark pretty quickly…

This thrilling debut is currently in development to be made into an original series for Hulu, produced by Oprah Winfrey. Do we need to say any more?

Two estranged siblings must try to see past their differences when their mother dies – and her hidden past is revealed, with a strange inheritance: a recipe for her famous black cake.

It’s a discovery that takes them from the Caribbean to London to California – and on a journey to unearth who their mother really was, and whether they can salvage their sisterly bond.

Penguin Random House says: ‘Deeply evocative and beautifully written, Black Cake is an extraordinary journey through the life of a family changed forever by the choices of its matriarch.’

A new Margaret Atwood release is always a joy in the calendar and this year brings a new non-fiction offering from the legendary author.

She’s asking questions such as: ‘Why do people everywhere, in all cultures, tell stories? How much of yourself can you give away without evaporating? How can we live on our planet? And what do zombies have to do with authoritarianism?’

Using her wit, intelligence and personality, Atwood attempts to answer these – with insight into the inner workings of her mind.

Tenants: The People on the Frontline of Britain’s Housing Emergency by Victoria Spratt

She is also housing correspondent for the i Paper and works tirelessly to highlight the plight of Britain’s broken housing system. There is nobody better placed to write a book that tells the stories of ‘Britain’s housing shame’.

In this debut, she unpicks decades of bad policy decisions to get to the bottom of how and why British housing is failing so badly.

With access to real people caught in a cycle of bad renting situations, Victoria uncovers how the rental crisis is impacting our wider lives. She also suggests the steps that must be taken to give everyone the chance of a safe, reliable and habitable home.

Amelia is in her late 20s and works in her family’s funeral parlour, where she is a cosmetic mortician – doing make up for the dead. She enjoys her job – but she’s lost and seeks solace in men she meets online.

Here, she learns about sex, grief, and death.

Pan Macmillan says: ’It takes two fathers, a bruising encounter with a stranger and recognition of her own body’s limits to bring Amelia back to herself.