The Kent approach
Jacqueline Kent was one of the guests at Write Around the Murray, the writers festival held each September in Albury. She was discussing Beyond Words, her memoir about her relationship with the late Kenneth Cook, but segued briefly into her biography of Julia Gillard. As a biographer, she said, the best subjects to write about are those who have no descendants and are dead. ‘‘I mentioned this to Gillard and she said ‘I’m not going to cross the road with you’.’’

What Kent didn’t say when The Making of Julia Gillard came out in 2010 was that she showed the former PM the page proofs before publication. She told the audience that was something ‘‘you don’t do’’. She said she was terrified about doing so because she had given Gillard ‘‘a hard time’’ about the asylum-seeker policy of 2002 and the way she had crafted it in the wake of John Howard’s policy. ‘‘I thought she would arc up. But she changed two errors of fact. She gave the proofs back and said she was all right with it.’’ Kent said she didn’t mention to journalists that she had shown the proofs to her subject at the time of publication because they would have said it was an authorised biography.

Dog day afternoon
What do you do if you have a dog with separation anxiety and you’re appearing at a writers festival. 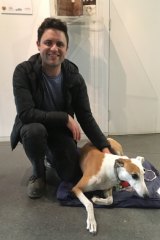 Issy, with his human, Christian White.Credit:

If you’re Christian White, author of The Nowhere Child and The Wife and the Widow, which will be published next week, you take him with you. So that’s why when White was on stage at Albury, Issy, his rescue greyhound, was lying peacefully at the back of Albury Library, showing not one bit of interest in what his human was saying.

But when White was signing copies of The Nowhere Child, guess who was sitting at his side? Perhaps it’s no surprise that Issy gets a good mention in the acknowledgements of both White’s crime novels. And just in case you wondered, White’s wife, Summer DeRoche, was keeping an eye on Issy while White was on stage.

Dr in the house?
One of these days, novelist Toni Jordan will be Dr Jordan. That’s assuming her PhD on romantic comedy through the ages meets the requirements of her supervisors at Deakin University. She is focusing on three writers – Moliere, Jane Austen and Nora Ephron. And in an unusual approach she has written it in the style of her subjects. Thus the section on Moliere is a playscript written in rhyming couplets, there is a short story in the mode of Austen and a film script a la Ephron. 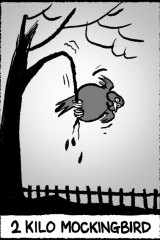 Her Moliere play is called The Denier – what in academic terms is called ‘‘parodic fictocriticism’’, she says – in which she tells the great French playwright that he is a writer of romcoms and he is duly horrified: ‘‘I refuse to be maligned’’, he tells her. She has actually filmed a chunk of that script, with Nelson Gardner playing Moliere and Joanne Redfearn as Toni Jordan herself. The film won’t be part of her PhD, but you can find it on YouTube. It’s a delight.

McEwan speaks out
Ian McEwan joined the massive demonstration in London earlier this year as a committed opponent of Brexit. His most recent novel, Machines Like Me, was about to come out and when we talked about it he put the push for Brexit in the context of a wider feeling: ‘‘Something toxic has entered the bloodstream of politics globally and we see it across Europe in Austria, Poland, Hungary, Italy and, of course, Britain. But we’ve obviously seen it with Trump, we see it in Brazil now, we’re seeing it in Turkey. It really is worrying because the last people to be remotely concerned about climate change are populists.’’

When I asked whether he would write fiction about Brexit he said he thought journalism was the best form of writing for the times. He has obviously changed his mind as next week Penguin Random House will publish his satirical novella, The Cockroach, about Brexit. The 112-page book riffs on Kafka’s Metamorphosis and follows one Jim Sams who wakes up to find he is British prime minister and ‘‘it is his mission to carry out the will of the people’’.

McEwan said: ‘‘As the nation tears itself apart, constitutional norms are set aside, parliament is closed down so that the government cannot be challenged at a crucial time and ministers lie about it shamelessly in the old Soviet style, and when many Brexiters in high places seem to crave the economic catastrophe of a no deal, and English national extremists are attacking the police in Parliament Square, a writer is bound to ask what he or she can do. There’s only one answer: write. The Cockroach is a political satire in an old tradition.’’