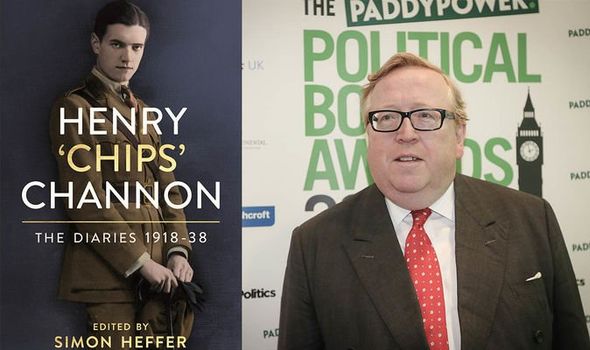 Channon became MP for Southend in 1935, taking over from his mother-in-law who “inherited” the seat from her husband when he inherited the family earldom. His son, Paul, took over the family seat in January 1959 in a by-election following his father’s death and held it until 1997 when he retired and was elevated to the upper house as Lord Kelvedon.

From 1918 until the year before his death, Channon kept a diary and for the first time, the unexpurgated version is available to the public.

This is volume one with two more thick volumes to come – the second in September this year and the third, and final, will appear in 2022.

In 1967, the future Tory MP Robert Rhodes James produced a very much expurgated version of the diaries – most of the people featured were then still alive and the libel courts available for redress.

Heffer faces no such difficulties – everyone in them is now dead – and boy, is that a good thing.

Henry Channon was an American who hated America, a married man who was sexually attracted to other men and someone who didn’t do a day’s work until he was 38 and became an MP.

The diaries begin in 1918, the last year of the Great War, when he was in France. We learn of the many aristocrats that Channon dined with and thanks to Simon Heffer’s exceptionally helpful footnotes who these people were.

Channon develops a crush on a handsome young soldier called Bobbie Pratt Barlow and they plan to live together in London after the war.

The plan never reaches fruition although Barlow does end up in a house in Sicily with hordes of beautiful young boys he trains to be servants.

When Barlow is sent to the Front, he writes to his friend that “he thinks only of me when he is going into battle, which is nice of him”.

Although this is the fullest version of the diaries we are likely to see, there are still gaps. This volume as we have seen starts in 1918 (the Rhodes James version started in 1934) but 1919-1922 and 1930-1933 are missing. We don’t know if they have been lost or Channon never kept journals for those years.

It’s a pity because we never find out how he met and married Lady Honor, the marriage that facilitated his political and social life – thanks to her family money.

Channon met everyone but often found himself on the wrong side of history.

He cosied up to Nazis – Hitler is described as “a semi divine creature” and Goering as “a lovably disarming man”, adding later “I cannot understand the English dislike and suspicion of the Nazi regime”  – believing that the Soviet Union posed a bigger threat to Europe than Germany.

The diary is a whopper but there are gems on every page. Highly recommended and I’m looking forward to volumes two and three.