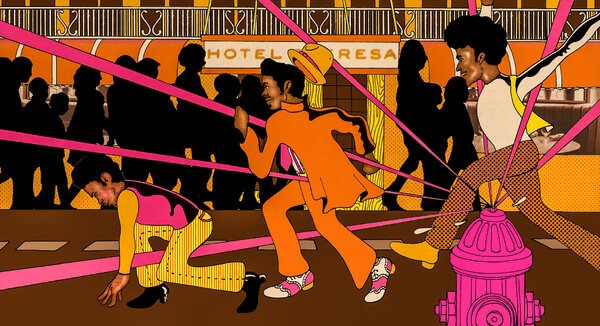 Colson Whitehead is on a tear. In the last five years, he has published three novels, two of which have won the Pulitzer Prize. Taken together, these books showcase Whitehead’s mastery over structure, history and atmosphere, not to mention a zest, shown throughout his career, for savvily mixing the palettes of literary and genre fiction. The runaway slave tale “The Underground Railroad” takes inspiration in equal part from “Gulliver’s Travels” and (somewhat to its detriment) children’s books like “Harry Potter.” “The Nickel Boys,” Whitehead’s best book in my estimation, is a boys’ adventure story repurposed for a grim reform facility, a “jail within a jail” of American life, in which the meanings of servitude and segregation are multiplied.

By comparison, the crime caper “Harlem Shuffle” is a much calmer, shiftier and warmer book; a book that luxuriates in the seedy spaces of late night, “when the straight world slept and the bent got to work”; and that treats the realm of gangsters with names like Pepper, Chink Montague and Miami Joe as an extended, if dangerous, family. Yet this book too is driven by a serious historical purpose, showing us the micro-changes in the landscape of Harlem and the prospects of Black Americans in the North in the 1960s.

Whitehead’s sweet, sweaty, authoritative, densely peopled portrait of a Harlem in near perpetual summer is the most successful part of the book. Had I not known Whitehead was a talented shape-shifter, I — as an outsider to Harlem — would have believed he had only ever written about this setting. Effortlessly name-dropping local characters and establishments (real and fictional), Whitehead presents a Harlem of “men in undershirts drinking beer” on their stoops while “outrunning some brand of Southern devil”; of professionals jockeying for power in elite clubs; and of sad Chinese restaurants where “the cookies were stale and the fortunes discouraging.” Equally impressive is Whitehead’s grasp of diverse trades like furniture selling, jewelry retail, electronics repair — and of course petty thievery. Except for a couple of potted histories, Whitehead’s research in “Harlem Shuffle” feels richly integrated with the story; he knows the people of Harlem in the 1960s; and the people are just that: real people.

In the past, Whitehead has shown a deep interest in systems but not always in human psychology (a charge that has also been leveled at earlier systems novelists like Don DeLillo and Thomas Pynchon). This book is a step forward. Ray Carney, the protagonist, is, in some ways, Whitehead’s most fully developed character, for the simple reason that he is a master not just of “fencing” (serving as a middleman for thieves) but also of self-deception. A striving furniture retailer with a sideline in crookery — for a small fee, he will haul your stolen TV or radio or brooch to a respectable retailer downtown — Carney clings to the false assurance that he’s not really a shyster. In some of the best parts of the book, written from a close third-person perspective, Carney protests that he just “facilitated that churn” of stolen objects; and that even if “he got a thrill out of transforming these ill-gotten goods into legit merchandise, a zap-charge in his blood like he’d plugged into a socket, he was in control of it and not the other way around.” As the book progresses, though, Carney loses control. He is made an accessory to a major heist against his will, and his life — and self-image — alters.

The heist, which takes up the first section of the book, is brilliantly executed, both by its participants and by its omniscient author. In describing the (fictional) stickup of the (real) Hotel Theresa — down-on-its-luck “headquarters of the Negro world” — Whitehead’s prose becomes taut, electric and gleeful. “Robbing the Hotel Theresa,” Whitehead writes, was like “slipping Jackie Robinson a Mickey the night before the World Series.” The novel treats the hotel itself as a microcosm of Harlem, and each civilian caught in the heist is tagged with a supple biography. Had Whitehead ended the book after this fierce and funny section, it would stand as one of the few perfect novellas in American literature.

Unfortunately — or fortunately, depending on your taste — Whitehead keeps going; and the rest of the book yields mixed results.

“Harlem Shuffle” is structured as a three-part mini-series set in 1959, 1961 and 1964. As it progresses, anti-police-shooting rebellions roil Harlem; old slick gangsters give way to a new breed of “hotheaded, feral, ever-trifling” hoods; and “the Junkie Shake, that new dance,” becomes “all the rage.” The flavor of each episode varies ever so slightly, but they are linked by Carney and his ne’er-do-well cousin Freddie, who is always pulling Carney into chancy schemes against his will.

If the first episode is a portrait of a reluctant crook, by the second episode, Carney is a contented family man, moving up in the world, expanding his showroom, more at ease with being a fence. He is also smarting with anger over being cheated out of $500 by a sleazy Harlem banker who fails to deliver on the promise of membership to an elite club of Harlem movers and shakers. For the next 100 pages, in an often wobbly plot — “I have to take care of one thing before I can do another thing, and I have to do something else before I can do that,” Carney explains, a bit too aptly — Carney concocts an elaborate revenge against the banker.

Like the heist, though, this revenge goes perfectly, with few consequences for Carney — and the book loses energy as a result. Instead of forcing Carney’s self-image into crisis, Whitehead gives us less-than-original observations about how everyone’s a crook. In fact, after the riveting danger of the first section, Whitehead protects Carney from real harm for much of the novel, and many scenes — peopled with a sitcom-grade angelic wife, evil in-laws, and criminals marvelously free of misogyny or sexual violence — have the dreamy feel of a comic book. The darkness — of Carney’s lonely childhood, of drug abuse, of violent crime — is pushed to the corners, bursting out only occasionally, as in one character’s superbly depressing and sinister flashback about building a supply line in Burma during World War II. And while I valued Whitehead’s attempt to write a serene character on the verge of success — extremely hard to pull off in fiction — I longed for the taut prose of “The Nickel Boys,” where every sentence, spat out laconically, advances the grim story.

Happily, Whitehead rights the ship by the third episode, which focuses on another crime to which Carney is an unwilling accomplice, with potentially deadly repercussions for the people he loves. And the crime story, which had become inert, suddenly revs to life, reminding us that Whitehead, beneath all the shambling and high jinks, remains an American master.