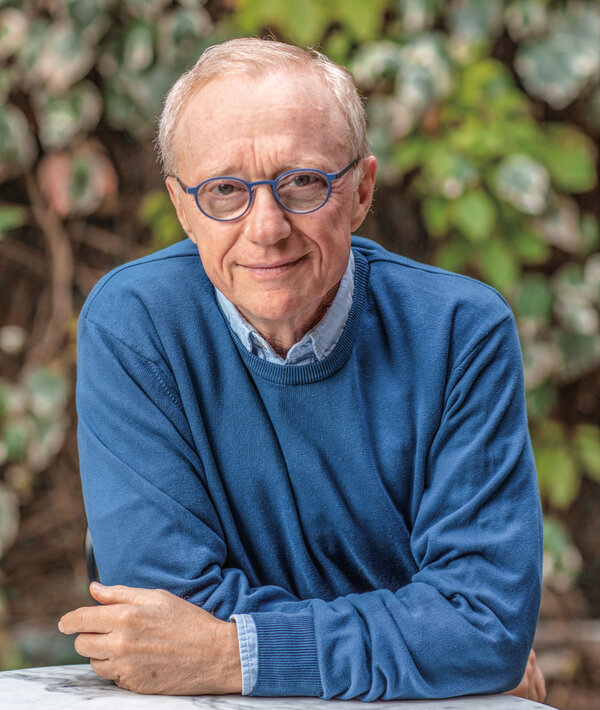 Like Aladdin and his magic lamp, David Grossman rubs ideas, words and incidents together the better to conjure the genie of storytelling. Grossman, one of Israel’s pre-eminent novelists and thinkers, has written fiction, nonfiction and children’s literature; his work has been widely translated, garnering him numerous international awards, including the 2017 Man Booker International Prize. As a novelist, Grossman has always roamed widely, even promiscuously, in his narratives, straying from the main line of the plot and branching off into side journeys that don’t appear immediately to connect to the tale that is unfolding but eventually, through an ingenious sleight of hand, link up with and shed light on what has gone before.

This centrifugal mode of writing gives his novels, from early works like “See Under: Love” to the haunting “To the End of the Land” and the more recent “A Horse Walks Into a Bar,” a slightly shaggy quality that suggests a resistance to formal boundaries — the imposed neatness — of fiction, as does his tendency to shift abruptly between realism, lyricism and surrealism. More than other writers, Grossman demands a willingness on the reader’s part to suspend disbelief over and over again, to follow him blindly, wherever his imagination takes him, even if he hasn’t fully laid the groundwork or the logistical gears creak a bit.

Most of the time this fealty pays off because Grossman’s novels have a cumulative power that subsumes mere plausibility. He succeeds in transcending the permutations of his plots and the localness of his settings — indeed, to make deliberate use of the Israeli template — to create themes of loss, the redemptive power of love, the immutable scars of history and the consoling effect of humor that resonate well beyond the world of the kibbutz or the background of the Holocaust. Once in a while the sureness of touch that lies behind his seemingly ad hoc, scattered approach falters and this reader, at least, found herself longing for a bit less inventiveness or a turn of events that didn’t seem to have wandered in because of some passing flicker in Grossman’s mind.

“More Than I Love My Life,” Grossman’s new novel, shows the writer at work in this characteristically expansive style, racing to stuff as much of life as possible into a single framework. This time around, as he explains in the acknowledgments, his book germinated from the real-life story of a Yugoslavian partisan fighter with whom Grossman developed a deep friendship over 20 years and who asked him to write her tale and that of her daughter. The novelist notes that he was granted “the freedom to tell the story but also to imagine and invent it in ways it never existed.”

And so we are introduced to a multigenerational saga fraught with geopolitical brutality and familial trauma, featuring a vivid and formidable 90-year-old matriarch named Vera, with a “Ben-Gurion-like domineering tone” and “a bladder like the late president Hafez Assad’s.” This “little woman with the sharp green eyes” presides over the novel, indelibly imprinting herself on all its characters. Yet the more we feel we have come to know Vera, whether through her narcissistic investment in her appearance — she is always reapplying red lipstick or wetting down the stray curl on her forehead — or through her portrayal of herself as having sacrificed her freedom and potentially her very life for her first husband, Milosz, a war hero and her great love, the more questionable the reality she puts forward becomes.

At the heart of “More Than I Love My Life,” translated by Jessica Cohen, is Vera’s imprisonment for almost three years on the remote Yugoslavian island of Goli Otok, one of Tito’s gulags, also known as the Adriatic Alcatraz, sometime during the early to mid-1950s (the time period is unclear). She has been sent to the island because of a drastic, life-altering choice she felt compelled to make when being interrogated by Tito’s security agents. Officially set up as a “re-education camp,” Goli Otok is a merciless prison, run by vicious wardens who berate, beat and rape the inmates who have been condemned to meaningless hard labor. Among the most riveting scenes of the novel are the ones in which Vera is made to stand for days on end — 57 in all — on a mountain cliff in the blazing sun so as to provide shade for a sapling one of the commandants has brought to the island.

Grossman’s evocative gifts are in full force: “An hour, another hour. The sun moves across her body like a slow flamethrower. Head, shoulders, neck. Everything is burning. The sweat drips. Her lips are cracked and bleeding. A cloud of flies buzzes above her. The bedbugs are nicely fattened up on her blood. She doesn’t scratch. No longer brushes them off. Lets them drink it all. This body is not hers. Neither it nor its pains. She is no longer human or animal or anything. Since yesterday, since she understood what she was doing here, her limbs and joints have been rigid. Her legs wooden. She walks as if she’s on stilts.”

“More Than I Love My Life” is about the burden of history as it impinges on individual lives and the family ghosts that wreak havoc in its wake. As a result of Vera’s decision, her young daughter, Nina, the child she had with Milosz, is taken from her. Although mother and daughter are eventually reunited, Nina never overcomes her sense of having been betrayed by Vera. Nina, in turn, will go on to abandon her daughter, Gili, who rejects her mother with a virulence born of equal parts bewilderment and self-hatred.

The family travels from Israel to Goli Otok in an attempt to fill in the missing pieces in Vera’s story and thereby come to some sort of rapprochement. Along the way they stay in “an unattractive coastal town” on the Adriatic coast, “with a row of seaside hotels, and restaurants that are still open, empty but lit up with bright neon, emitting billows of noxious yet slightly tempting smoke from grilled meat, all with long freezers piled with mountains of ice cream in frightening colors.” This quick, synesthetic description reminded me of fiction’s ability to evoke an often intuited but rarely articulated atmospherics of place.

There are many stories within stories in the novel, like concentric circles whirring in the air. Some are underdeveloped, such as the state of Gili’s marriage (her husband, Meir, is a cipher); some seem like clanking, superfluous devices rather than intrinsic to the plot (the filmmaking project to document Vera’s account of what happened to her after she was arrested by the Yugoslavian secret police); and yet others are alluded to too belatedly and briefly (the abusive manner in which Vera’s sister and brother-in-law treated Nina after mother and daughter were forcibly separated) to be successfully integrated into of the novel.

The result is a certain amount of confusion and unnecessary distraction from the main events, yet such is this writer’s skill and generosity of vision that “More Than I Love My Life” moves beyond its flaws to cast a spell that lingers. Grossman is especially good on women, presenting them as complex and nuanced characters, and his understanding of the opaque ways of love — sometimes subterranean, often unexpected or arbitrary — is unmatched.

David Grossman is one of our outstanding contemporary writers and I have sometimes thought that, despite all the accolades that have come his way, he hasn’t been given his full due because he happens to be an Israeli, although one who is often deeply critical of his country’s actions and moral quandaries. To read him is to understand that there is a world beyond the political, even in these re-tribalized times, one in which there is room for recognition, however incomplete and often painful, of who we are in our own eyes and in one another’s.