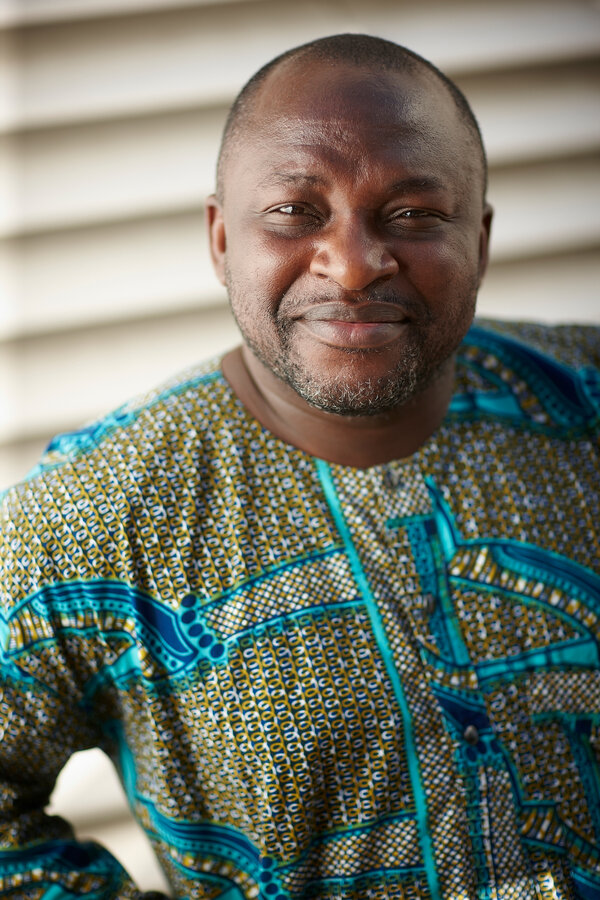 It is impossible to find the village of Ikot Ituno-Ekanem, home to the Annang tribe in the Niger Delta, on the internet. This is where Ekong Udousoro, the protagonist of Uwem Akpan’s debut novel, “New York, My Village,” is from. When we meet Ekong, he is a former professor and managing editor in Uyo, Nigeria, in the process of acquiring a visa to travel to New York for a fellowship, named after Toni Morrison, at the fictional publishing house Andrew & Thompson. There, he is to edit an anthology on the Biafran War that will bring the atrocities committed against his people to a greater audience.

Akpan is precise in balancing his main character’s (at times) naïve optimism with his reader’s knowledge of class and race-based homogeneity in Western publishing. It is with a wince and a laugh that one reads Ekong’s prediction: “It was to be my first time in America. I had seen a lot of America on TV and spoke American English, so it was not going to be that complicated.” But to summarize the book as a satire on New York’s publishing industry belittles its aims. Before he gets to the titular city, Ekong is twice denied for a visa because he cannot prove the existence of his tribe or the war crimes it has survived, prompting doubt from embassy officials about the legitimacy of his project in New York. “What sort of country in the 21st century cannot even count its ethnic groups?” he wonders. “How do you know who is who? Does the price for the lack of this basic knowledge have to be being mistakenly slaughtered along with others? How does one become a minority? How does one stop being a minority?”

The answer to that final question is the book’s success. Akpan’s examination of the publishing industry serves less to mock and more to chart the ways in which narrative is essential in the forming of cultural groups. Various characters are often asked to write memoirs that would situate their identities in trauma, a precept Akpan steadfastly rejects. This is a book in which African American spirituals are dubbed “ultra-sad songs about slavery,” and which instead encourages literary holism. Ekong’s 600-page anthology, like this novel itself, extends sympathy to both Annangs and Biafrans, encompassing texts by Chinua Achebe, S.E. Orobator, Brig. Gen. Godwin Alabi-Isama and others.

That is not to say that Akpan envisions universal harmony — interpersonal connections become complicated by tightly held ethnic and racial ideologies. Ekong’s relationships at home and abroad are continually lost and regained as characters navigate one another’s differing cultural identities. Keith, his African American neighbor in New York, quickly conflates his experiences with those of Black Africans; and Molly, the white-passing publisher of Andrew & Thompson, makes efforts toward diversification that sometime manifest as microaggressions themselves. Ekong’s marriage to Caro, back in Nigeria, is strained by her grandfather’s treachery in the war. Most strikingly, there is Ujai, the American-raised daughter of Ekong’s childhood friend, who represents “our Black diaspora burning at both ends.”

Ekong’s discovery that he is the only Black person in his office — “it was as though I myself had become darker” — reads much like Frantz Fanon’s declaration that a Black child “will become abnormal on the slightest contact with the white world.” But New York feels “so global, so democratic, as though all these lights had already boiled and refined every soul down to essential humanity.” Food is the great leveler that restores core compassion, and the book’s denouement takes place on Thanksgiving, when a shared meal heals wounds created by colonialism, racism and tribalism.

There are some technical faults in the novel. Moments of wit are often lost to poorly structured sentences, an abundance of too-apt proverbs and monologued exposition. A better edit might have highlighted Akpan’s obvious gift for characterization and arresting images. A Midtown Starbucks is lovingly compared to “the powerfully energetic paintings of my namesake, Ekong Emmanuel Ekefrey”; Ekong’s white-suited landlord appears “like an egg sunny-side up on the curb.” It is a shame such formal potential is not more carefully honed.

Still, “New York, My Village” succeeds in making the too-rare observation that identity exists not as a fixed, individual thing, but in relation to others, and thus is constantly shifting. To those who forget this, Akpan extends a depth of kindness and forgiveness that gives this sometimes frustrating, but ultimately illuminating, book its sense of hope.