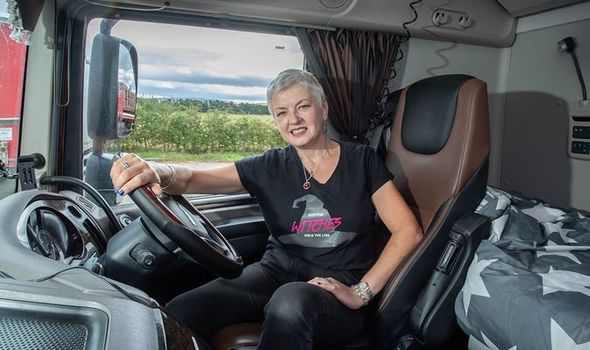 The death of my husband Ian last year following a long and distressing illness, coupled with the loss of my job as a children’s author saw me looking around for a new source of income. The fees for Ian’s care had eaten away at our savings and I needed a new career. That was when a friend told me: “You like driving. You should give it a go.”

She meant professionally, as an HGV driver.

This was long before news stories started to emerge that Britain was short of around 100,000 lorry drivers, leading to empty supermarkets shelves, supply chain delays and fears of Christmas shortages.

The dearth of truckers is not new, but the coronavirus pandemic, Brexit and tax changes have all contributed to the lack of qualified drivers.

In a scramble to keep their stock moving, companies such as Tesco, John Lewis and Aldi have increased wages and, in some cases, offered lucrative joining bonuses. Waitrose is said to be offering salaries of nearly £54,000.

Quite frankly, I had no idea my new career would become so newsworthy. But my friend was right; I do like driving and I like getting out and about so it seemed like something of an adventure. What could go wrong?

Currently, female truck drivers make up just one percent of the total. Yet women are seen as a safe, reliable option as drivers.

I’ve had a whale of a time learning to drive category C Class 2 lorries – that’s the rigid-bodied trucks like delivery lorries, dustcarts and large vans over 3,500kg.

But as a woman, I discovered the first question you’re asked, almost without exception, when you sign up, is: “Horses?”

Funnily enough, I do own horses, and driving horseboxes really is a reason many women take a Cat C test, but once you resist the impulse to roll your eyes and say, “no, I want to do this for a living,” nobody blinks.

The fact is, women make terrific HGV drivers, and employers know it.

I’ll forever be grateful to the man who messaged me privately in the middle of my CPC (Certificate of Professional Competence) course, to say: “My wife drives, and she’s better and calmer than any of her male colleagues. And they know it. Don’t give up!”

The CPC is a crucial part of training for any professional driver, HGV or not. There are theory and practical elements. For me, because of Covid restrictions, the theory bit happened in online Zoom classes. Most of the participants were men who’d been doing the job for a while and were renewing their CPCs, as the law demands.

But as the week went on, it was reassuring to be joined by some women – a few were just starting out, but one or two were seasoned drivers.

You can’t drive trucks for commercial purposes without a CPC, and you have to renew it every five years.

To be honest, I was dreading it: I chose to complete my 35 statutory hours in a concentrated five-day block, and I expected it to be a necessary drag.

Instead, I spent five days online, listening, exchanging stories, watching interesting (and occasionally horrific) videos, always fascinated by the experience of people who have spent their working lives on the road.

The CPC course ran the whole gamut from mind-and-butt-numbing but vital (for instance, rules on drivers’ hours, which are tightly regulated for good reason) to terrifyingly riveting (gravity and momentum… and what can go wrong).

I’ll be honest, I hated physics in school. But the real-life consequences of it… well, I couldn’t look away. But that was the point – no driver should.

There were many real-life moments that stuck in my mind like the driver who approached a junction too fast, tried to beat the lights… and took out 23 people as the opposite line of traffic moved (it happened in South Africa).

Or the lorry driver who didn’t know his load had been badly secured: he approached a roundabout at a cautious 10 miles an hour, but as he braked, the load slid gently but inexorably forward, crushing him in his cab. (He didn’t survive.)

Once you’ve watched some of the videos on this course, you’ll never glance at your mobile phone in the car ever again.

There are a few more hurdles to leap before you complete the actual driver training.

You need to pass a medical (including the crucial eyesight test), and there’s the theory test.

That last one was nerve-wracking enough. Now aged 57, I hadn’t sat an exam since I was in my twenties, and I was afraid I’d be the middle-aged woman sneaking out of the test centre in embarrassed failure while the 17-year-olds walked out proudly towards their practicals.

But luckily I’d read the guides from the DVSA (the Government’s road safety standards authority) until my head was spinning, and, instead of messing about on Twitter, I’d spent every spare moment practising the hazard perception videos.

So I passed, and now I had two years to pass my practical test. Then comes the real edge-of-your-seat stuff, well… the wait.

Because of Covid, there is a huge backlog of candidates for Category C tests, just as for regular driving tests. It’s one of the most frustrating aspects of the driver shortage. I’d love to get out on the road, and I’ll try as often as I need to, but the test availability isn’t there.

The normal routine is a four-or five-day course of intensive driving, ending in the test on the fifth day.

On day one of that week, you stare at this monstrous vehicle with horrified trepidation, by day five, you’ve given it a pet name and you’d quite like to take it home with you.

(My lorry was Big Django, after my own beloved pick-up truck who now goes by the affectionate diminutive Little Django – and I thought he was quite big before I started this HGV training).

I’ve had one bad training experience and one brilliant one. I’ll skim over the former – but I’d advise anyone having a go at this to choose your instructor carefully, because being yelled at for five days, and told you’re heading for certain failure, does not tend to prepare you for a calm and collected test experience.

Ask around for local recommendations. My second instructor, Louise from McPherson Training, in Elgin, Scotland, was almost supernaturally patient and easygoing – and, if I hadn’t made one stupid mistake in the last five minutes of my long test, I’d be a qualified HGV driver right now.

It was going so beautifully until I decided I was looking too hesitant, and pulled out at a roundabout, forcing a little red car to brake.

Obstructing or holding up other traffic being a mortal sin, I knew instantly that I’d blown it – and there might have been some cursing involved.

Now I’ll just have to wait patiently for a new test date and it’s hard to be patient because I know I can do this. After all, I know where I went wrong last time.

What’s more, Louise was keen to remind me a pass is completely achievable if I relax and focus.

She seemed to know — and have trained — about half of the HGV drivers we passed on the road, and some of them had had catastrophic moments like mine in their first tests. That knowledge actually helped.

Pulling out in front of that car may have been idiotic, but it wasn’t uniquely idiotic. Patience, concentration and thinking quickly are the key to this job.

The test is tough to pass because it should be tough. Being in charge of a car, as a friend remarked to me, may be like being in control of a weapon – but driving a massive lorry of more than 3,500kg means you’re operating a weapon of potential mass destruction.

It’s reassuring that the bar is so high – you can be sure that the drivers of the trucks you see out on the roads know exactly what they’re doing, and they’ve proved it.

I just wish, as a lot of frustrated consumers must, that the Government would provide more test dates. But don’t be put off, if you’re a woman, by the notion that we aren’t welcome in this industry.

I’ve had nothing but encouragement and good wishes from the people I’ve met over these last months. And I can tell you from experience that the haulage industry is far more supportive and inclusive — and a lot less misogynistic — than the world of children’s writing.

My journey towards driving a lorry came after many successful years as an author, part of a team writing animal fantasy novels for children, when I was dropped by my publishing company overnight for supporting J K Rowling.

Simply, I had added the hashtag #IStandWithJKRowling to my Twitter handle in response to the author’s essay revealing she was a domestic abuse survivor and arguing that letting self-identifying transwomen into single-sex spaces could be a danger to females.

A hate mob descended on my social media accounts, encouraging people to contact my publisher to register their horror and call for me to be axed. It clearly worked: by the next morning I had been summarily fired.

Frankly, after that experience, I’m looking forward to the day I can apply for a job as a full-time truck driver, and slide my full licence across the desk to a prospective employer.

And I have a feeling I’ll be tempted by the C+E category, the big articulated lorries – a Giant Django, if you like.

With luck and a little more focus at roundabouts, I’ll hit the road soon. Just me and my cargo, and Brad Paisley on my Spotify (not so loud as to distract me, though, Brad).

But in the meantime, as I drive Little Django down the A9 or the M6 to take my kids back and forth to college, I try to be really considerate to the truck drivers on the road with me.

Because now I know what they’ve gone through, and learnt, and practised, to do this job. And how important it is.

● Gillian Philip is a children’s author and trainee HGV driver