A very unlikely sex god: A balding, podgy invalid with piles, H.G. Wells wrote some of the greatest science fiction of all time. But it was his libidinous appetite that was truly out of this world

His classic works of science-fiction, The Time Machine (1895) and The War Of The Worlds (1898), saw H. G. Wells predict with uncanny accuracy the shape of things to come: fascist governments, vegetarianism, the destruction of rural England and the spread of roads, huge and horrifying, bombs falling on undefended civilians, tanks lumbering across battlefields, floods and climate catastrophes.

The man was ‘a volcano in perpetual eruption of burning thoughts and luminous images’.

In his sociological and political tracts, Wells discussed nationalism, religious bigotry and xenophobia — all the dilemmas of the following century, and the one after that, i.e, ours. 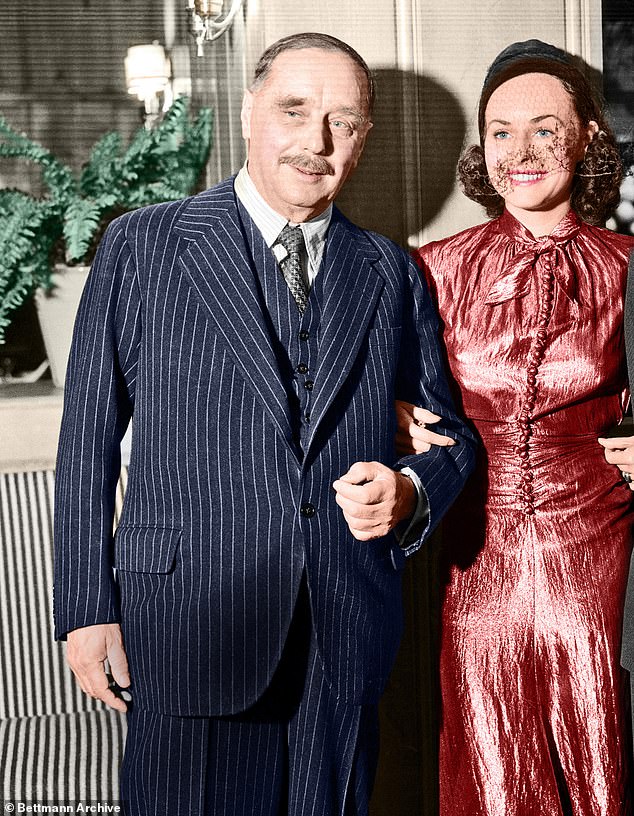 Claire Tomalin explores the life of H.G. Wells, born in Bromley, in 1866, in a new biography. Pictured: H.G. Wells and actress Paulette Goddard

As a pioneer socialist, Wells wanted a health service and old-age pensions. He condemned base profit-seekers and the mendacity of advertising.

All very noble — but the abiding theme in Claire Tomalin’s biography is that Wells, born in Bromley, London, in 1866, was completely sex mad.

‘He felt that sexual desire was as natural as hunger or thirst,’ and no more to be the subject of moral censure than golf or chess. ‘Wells felt entitled to seek and enjoy sexual intercourse whenever, wherever and with whom he pleased.’

It’s hard to know the secret of his appeal, though Tomalin does say ‘his body smelt deliciously of honey’ (that’s what I call research).

Wells also had a terrible wispy moustache, wore baggy Jaeger suits and when young weighed little more than 7 st. Just 5 ft 7½ in, in maturity he was bald and podgy, and resembled Arthur Lowe.

Maybe money was the aphrodisiac? The Time Machine was published when Wells was 29 and remains in print to this day. He was a big bestseller, translated and distributed the world over. Film adaptations have been frequent. Orson Welles’s ‘The Martians Have Landed’ hoax news bulletin, his radio version of The War Of The Worlds broadcast on October 30, 1938, additionally made Wells a household name.

There was mass hysteria among listeners, who believed meteorites were falling on New York and an invasion from outer space had begun.

Wells was raised in modest circumstances. His mother was housekeeper at Uppark, a mansion in West Sussex, and his father sold cricket bats. 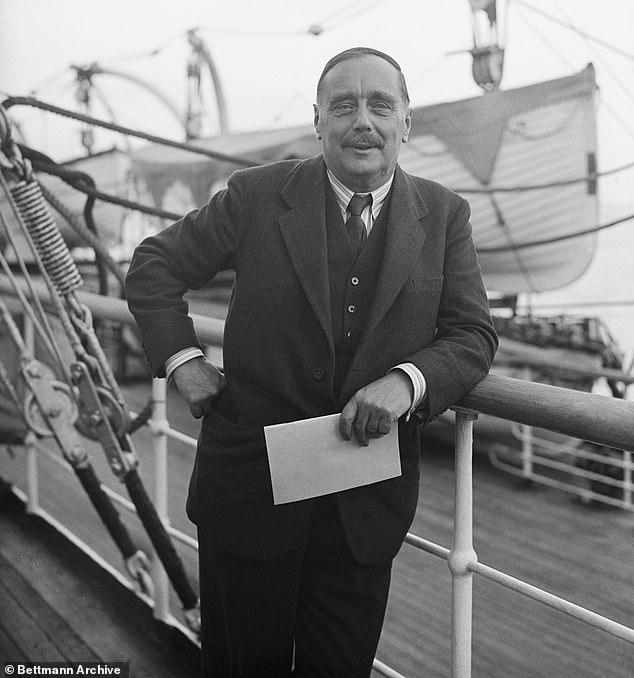 Claire Tomalin claims Wells (pictured) was a chronic invalid, always suffering from breakdowns and kidney problems, made worse by a rugby accident

At 13, Herbert George was apprenticed to a draper, slogging long hours, six days a week, in charge of the till, recording cash payments, dusting and sweeping, tidying the stock.

Though gents’ outfitting was safe and respectable, Wells longed to jump over the counter, so to speak, and search for a world elsewhere — as his heroes Kipps and Mr Polly do, in the popular novels he wrote based on his impecunious origins. (Kipps became Half A Sixpence with Tommy Steele.)

Wells liked reading, mugged up on physics, biology and chemistry, studied Latin and won a scholarship to be a trainee teacher in Kilburn, at a ‘cheap private boarding school’ run by the father of A. A. Milne. He took a correspondence course offered by the University of London.

While all who encountered him were left in no doubt of Wells’s ‘driving will and intelligence’, what Tomalin shows is that he was a chronic invalid, always suffering from breakdowns and kidney problems, made worse by a rugby accident.

He had a ‘bruised liver’, urinated and coughed blood, suffered from bronchitis and piles and both lungs were congested. Haemorrhages were frequent. There was an internal abscess. Wells’s life was saved (more than once) by a doctor at Uppark, who painted his chest with iodine.

At this stage, Wells was so poor, ‘he had nothing worth pawning. His socks were in holes’. From his sickbed, however, he began writing articles and stories, which were accepted for publication in weekly magazines. 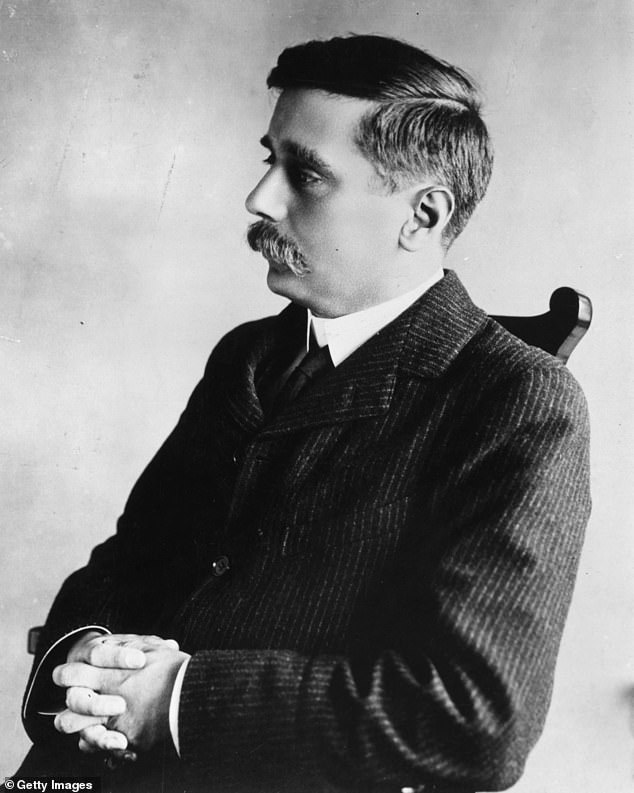 Almost immediately after Wells (pictured) married his first cousin Isabel in 1891, the writer embarked on infidelities

Editors (and readers) warmed to tales about inter-planetary travel, Martians (‘brains in tall metal walking machines’), creatures on the moon and weird vivisection experiments — which became The Island Of Doctor Moreau (1896) and was filmed twice, with Charles Laughton and Marlon Brando.

Perhaps because of his illnesses and fragility, Wells was all the more determined to prove sex ‘was neither filth nor flirtation and I began to want more of it’.

In the Victorian era, ‘only a wedding made sex permissible’, so in 1891 Wells married his first cousin, Isabel. She was ‘obliviously conventional’ and burst into tears on her wedding night. She bought a tricycle and spent her weekends pedalling as far away from the marital couch in Wandsworth as possible.

Almost at once, says Tomalin, Wells ‘embarked on infidelities’. Though we are not vouchsafed what they may have been, Wells would ‘opt for variety and sexual adventures’, like a turn-of-the-century Warren Beatty.

What we are told is that, having divorced Isabel ‘with amazing speed’, in October 1895 Wells married once more — to Amy Robbins, known as Jane, a student-teacher. The couple moved to Camden and later had a large house built in Sandgate on the Kent coast, by the well-known architect C.F.A. Voysey. 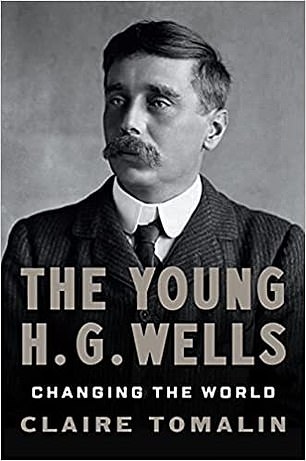 A ll went well until 1901, when Jane had a baby. Wells ‘left sharply the next day on his bicycle’, vanished for months, and had flings in Brighton, Worthing, Petersfield, Hastings and Winchelsea.

‘It was now accepted between them’, says Tomalin, ‘that Wells needed to be free to behave as he liked’. Jane never made a fuss, because she had ‘less enthusiasm for sex than he did’. She died of cancer in 1927. The loneliness and humiliation she endured was scandalous — Wells sounds a wretched little man.

He had his comeuppance, almost, when, in 1908, aged 42, he got entangled with Amber Reeves, an undergraduate at Cambridge. She ‘flung herself into his arms’ and Wells was besotted.

His love letters (which Tomalin has unearthed) are completely embarrassing. ‘I kiss the little button that buttons you up,’ etc. I honestly can’t think what he can be referring to, and I’ve been about.

For the first time, Wells experienced sexual jealousy, particularly when Amber married George Rivers Blanco White, a barrister. Amber tried to assure Wells she found her husband ‘physically repellent’, so Wells (at her request apparently) made her pregnant in 1909. Blanco White brought up the child as his own. This is a French farce.

Tomalin doesn’t have space to go into Wells’s sexual involvements with Violet Hunt, a girl he met in a New York brothel, Ella D’Arcy, Dorothy Richardson, Rebecca West (with whom he had a son), Moura Budberg (‘We live in open sin’) and a mistress in France called Odette.

But we get the picture. ‘Wells was not conventional or even respectable.’ He ‘overstepped accepted bounds so outrageously’, he couldn’t keep friends even in the Labour Party. He died in 1946.

Churchill admired Wells’s social and political prophecies and kept a full set of his works at Chartwell.