Whether in films or books, the tropes of the rom-com are predictable and Wedding Puzzle, Sallie Muirden’s fourth novel, does not deviate from its formula: girl meets boy; after a period of mutual gratification against picturesque backdrops they exchange breathless promises, until disaster threatens to separate the lovebirds. 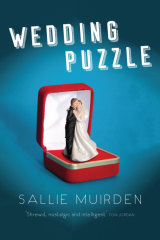 Of course the manner in which miscommunications are unknotted so cherry blossoms and fairy dust can be sprinkled on the final pages varies but that there will be a happy outcome is as inevitable as the sun slowly setting on the ‘‘feathery dunes’’.

Muirden’s narrator is 24-year-old Beth. After only nine months of courtship, she’s about to head down the aisle with her beloved, Jordan. But on her wedding day, she receives a bombshell in the form of a letter from Tracy, Jordan’s teenaged sweetheart and Beth’s former frenemy. The letter throws Beth into a tizz and she wonders whether its contents would lead her to forfeit the impending ‘‘razzle-dazzle but also the stretched-out safety of marriage, a cute grizzle-free baby, the whole shebang’’. She spends most of the book riddled with anxiety.

Alas, the Portsea hotel is already booked, the staff are fussing over the preparations and guests are poised to arrive, so there’s not much time for procrastination. But dithering is exactly what Beth does. The first-person narrative dips in and out of her school days and so the novel reads like  crossover YA fiction with its commentary on the rivalries and reconfigurations of the various cliques and the times ‘‘adventurous Beth’’ struggled with ‘‘scaredy cat Beth’’ or ‘‘imaginative Beth’’ vied with ‘‘participant Beth’’. Her exclusion from the glamorous track posse ‘‘the baton-change girls’’ (of which Tracy was leader), her commiserating with best friend Judy and the humiliations at the Fifth Form formal are all comprehensively covered.

So much so that the novel suffers from too much repetition (how many times does the reader have to listen to Beth mooning over her long-time crush and now bethrothed, who frankly, is one of those men startlingly more fictional than real; or rather he seems that way in Beth’s naive estimation).

The ever-genial Jordan with his ‘‘slender, honey-coloured limbs’’ and ‘‘affectionate prattle’’ just happens to be a childcare worker, who can easily draw on a ‘‘fund of compassion when he donated to buskers, doorknockers and pining or aspiring girlfriends’’. Moreover, with her erstwhile attachment to Tracy complicating her current relationship with her fiance, Beth’s insecurities become tiresome as she frets that ‘‘Jordan would prefer a girl with a sportier body than mine’’.

Maybe, she reasons, marriage would prove that she wasn’t harmed by her parent’s separation and her father’s absence and also, marrying a boy ‘‘who could run fast would leave my dispiriting adolescence behind’’.

Set some time in the ’80s, those who grew up during this period will get a nostalgic frisson from references to Gilligan’s Island, Happy Days, The Brady Bunch, INXS, Raelene Boyle and Dolly magazine but apart from these randomly apposite markers that serve to fix the time, there is little attempt to explore Australia’s broader socio-political context apart from the insular sports-obsessed ‘‘starter-gun culture’’ of Mornington Grammar and excursions to bayside surrounds.

The lack of any other character’s perspective leaves us entirely at the mercy of Beth’s confused ruminations, but unfortunately she’s not engaging enough to sustain interest. Her perceived outsider status, self-esteem deficiency and tendency to seek vicarious pleasure in the antics of others may conform to the model of teenagerhood but Muirden makes too much of her character’s inertness and indecisiveness. The plot’s premise barely stretches over so many pages. Marriage, commitment, fidelity and trust: these are big themes that could’ve been more deeply explored, but Wedding Puzzle settles for a prolonged play of ambivalence from its heroine.

Jane Sullivan is on leave.