Lie that lost Hitler the war: When the Fuhrer broke his pact with Stalin, he ordered the extermination of the Russian race. But he’d reckoned without two deadly weapons: patriotism and the weather

Moscow on a midsummer’s night in 1941 was a balmy place to be. For the discerning, there was Chekhov’s Three Sisters playing to full houses, while opera lovers had a choice between Rigoletto and La Traviata.

Others fished for their suppers on the banks of the river, tended their allotments, or simply strolled through Gorky Park.

All felt safe in the knowledge that, for the past two years (give or take a few weeks), Stalin’s Soviet Union had been in a pact of friendship and non-aggression with Hitler’s Germany.

Though their fundamental political beliefs were polar opposites — one communist, the other fascist — the two biggest nations in Europe had agreed not to go to war with each other.

Until, suddenly, this cosy world turned on its head. The next morning those same Moscow streets were filled with silent, anxious crowds surrounding public loudspeakers, from which came the trembling, echoing voice of Molotov, the minister of foreign affairs. 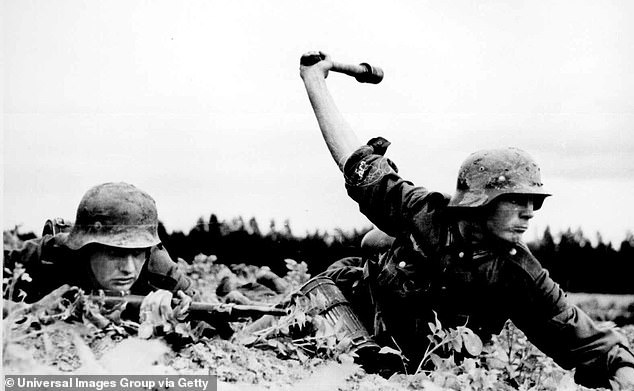 Until 1941, Stalin’s Soviet Union had been in a pact of friendship and non-aggression with Hitler’s Germany for two years (pictured: Operation Barbarossa)

Germany, he announced, had launched an invasion of the Soviet Union in what he called ‘an unparalleled act of perfidy’. He summoned the nation to fight back in a ‘Patriotic War for our beloved country, for honour, for liberty’.

And so began Bar-barossa, German codename for the 20th century clash of titans as Nazi Germany’s armies swept into the Soviet Union, bent on subjugating its people and taking its land.

What lay ahead was six months of fighting that was so cruel and so devoid of morality and decency — on both sides — that it’s hard not to weep. Millions died in terror, soldiers and civilians alike.

It would also turn out to be, argues broadcaster Jonathan Dimbleby, Hitler’s step too far, his over-reach. It was why, how and where he lost World War II, and he only had himself to blame. 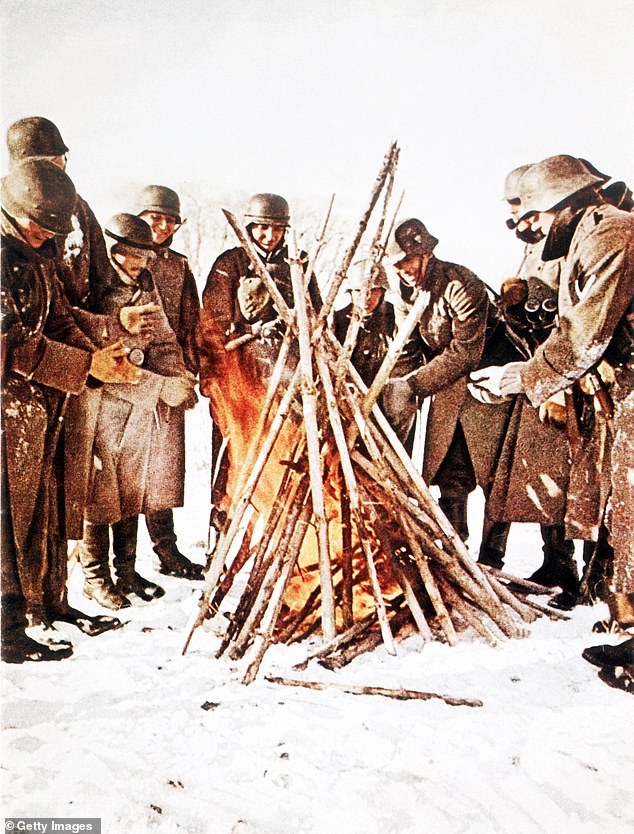 In Hitler’s blind racial ignorance, he expected the communist untermenschen to scatter before his superior Aryan Nazis but out of courage and patriotism, Soviet troops resisted to the death

It was he who had sought and signed the peace pact with Moscow in 1939, though he never had any intention of sticking to it. Instead, it was a strategic move to buy him time to invade and mop up western Europe before turning east, where his real ambitions lay.

Russia had everything he craved — oil, grain and, above all, land (lebensraum) into which the Nazi settlers of his Greater Germany could expand. He also loathed communists and Slavs and would be glad to wipe them off the face of the earth.

So he set a trap and Stalin — tired of waiting for an alliance with the British that never came and lured by the promise of half of Poland for toeing Hitler’s line — strolled into it.

Now — out of the blue, as far as a gullible and stunned Stalin was concerned — that deal was blown apart as, without warning, the Germans advanced on fronts that stretched 3,000 km, from the Baltic in the north to the Balkans in the south. 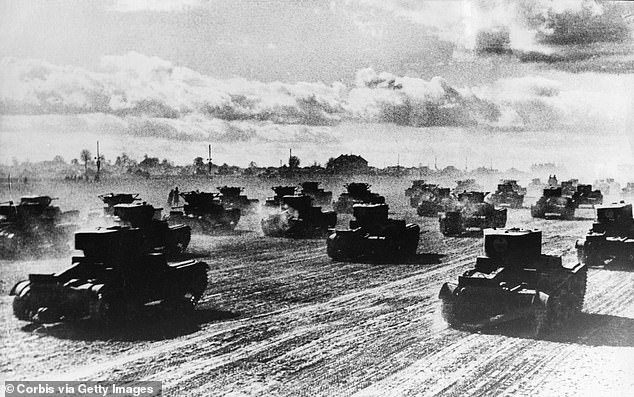 Russian tanks are pictured rolling towards the battle front on June 22, 1941, to defend Soviet territory from German troops on the first day of Hitler’s Operation Barbarossa

The firepower was terrifying — 3.3 million troops, 3,350 tanks, 7,000 big guns. And it was in the hands of soldiers who had been convinced by their Führer to believe two things.

First, that the Red Army was not fit for purpose. ‘Bolshevism will collapse like a house of cards’, Hitler declared. His forces would have the job done in six weeks, he promised.

Second, that as a race, the enemy were sub-human and to be exterminated. Traditional rules of engagement would not apply. ‘Elimination of all active and passive resistance’ was sanctioned, as was ‘ruthless and vigorous action against Bolshevik agitators, guerillas, saboteurs, Jews.’

From the start, this was a conflict of unparalleled savagery, and Dimbleby, as he skilfully tracks the shifts and turns of the campaign, spares no detail. It is not for the faint-hearted. 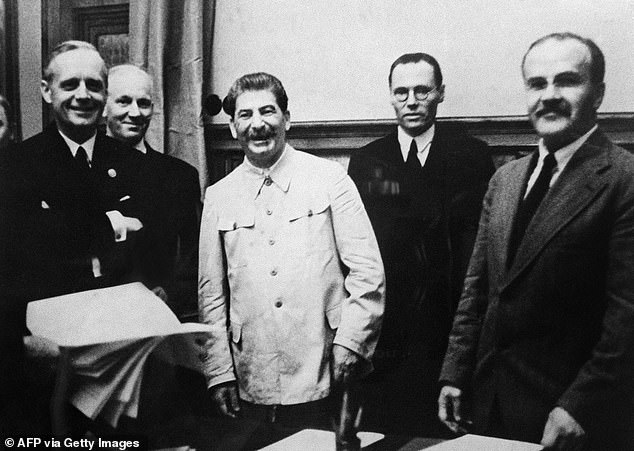 One German dispatch rider recalled roads strewn with dead Russians ‘mashed up by our tanks. An arm there, a head there, half a foot somewhere else, squashed brains, mashed ribs. You can’t believe it was ever a human being’.

German tactics were to ‘kettle’ Soviet formations into pockets and then pick them off. The results were devastating. After a fortnight, 20 out of 44 Soviet divisions had been annihilated and the others were so depleted they were unable to fight.

‘Atrocity was piled upon atrocity,’ Dimbleby writes, ‘until the field of battle was contaminated by so much fear and hatred as to obliterate any vestige of common humanity.’

No distinction was made between soldiers and civilians in what one German soldier later described as ‘scenes bordering on insane hallucinations and nightmares’.

So lacking in humanity was what went on that a German general saw nothing bizarre in telling his officers not to hang partisans within 100 m of his window because it spoilt his view. Then there were war crimes — prisoners buried alive, villages butchered wholesale, Jews slaughtered by SS extermination gangs in what was a dress rehearsal for the Holocaust. 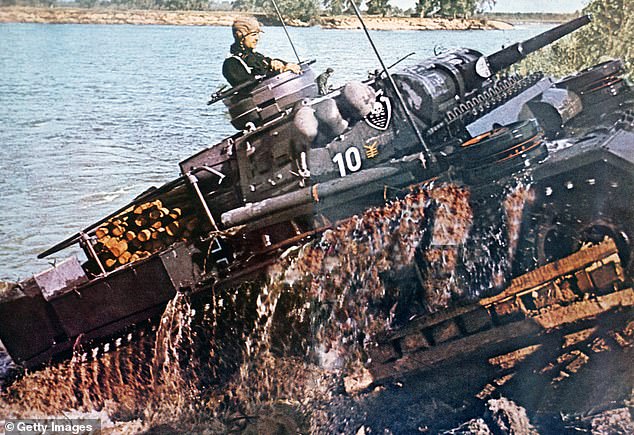 The cold was unbearable as the Russian winter howled in and the Germans, who were still in their light summer denim uniforms, were forced to flee (pictured: a tank of the SS division crossing a river on the Eastern Front in Russia)

Yet the Soviet forces dug in against what seemed to be an unstoppable onslaught.

After initial panic — and times when Stalin lost his nerve and hid in his dacha — they fought back doggedly, hiding in foxholes and leaping in front of the enemy at the last minute, giving their lives for Mother Russia. 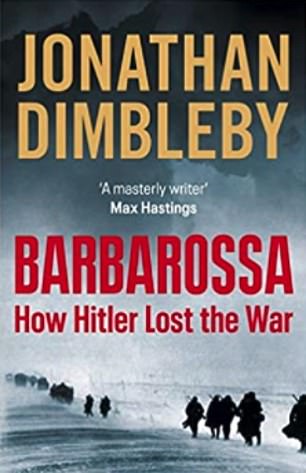 Here was the factor Hitler, in his blind racial arrogance, had overlooked. He expected the communist untermenschen to scatter before his superior Aryan Nazis. Out of courage and patriotism (and egged on by party commissars standing behind the front line to shoot anyone who ran), Soviet troops resisted to the death.

What was meant to be a swift victory reducing Russia to its knees became a drawn-out slog, with every inch of ground contested, every life exacting its price.

Yet it’s easy to forget how close the Germans came to a famous — and history-changing — victory. With three principal targets, the advancing army captured Kiev in the south, surrounded Leningrad in the north and reached the gates of Moscow in the centre.

But they had had to fight longer and harder than ever expected. It was now November, the weather deteriorating and supplies running out. A German infantryman recalled ‘the last great raid on Moscow, but we lack almost everything. Little in the way of food. The gruelling forced marches are pushing us to the edge of insanity. We are exhausted and miserable.’

The cold was unbearable as the Russian winter howled in, and the Germans, still in their light summer denim uniforms (they hadn’t thought it necessary to pack for the cold), froze. They were forced to flee, scorching the earth behind them on a vindictive Hitler’s orders.

Barbarossa ended in ignominy for Hitler and — as this riveting account argues — ultimately lost him the war. ‘It was,’ writes Dimbleby, ‘on the killing grounds of the Eastern Front between June and December 1941 that the fate of Nazi Germany was sealed.’