Celebrated as both a writer of short fiction and a translator, Davis shows in her new collection, “Essays Two,” how the two practices are inextricably linked.

When Javier Marías, the contemporary Spanish author of 15 novels who, early in his career, translated work by Laurence Sterne, Joseph Conrad and Vladimir Nabokov, was asked if translation had prepared him to be a writer, he said that it had, so much so that were he ever to have a creative writing school — God forbid, he said — he would accept only students who knew at least one language besides their own. “And the only thing I would make them do,” he explained, “is to translate and to translate and to translate. Because I think that’s the best possible school for someone who wants to become a writer.”

“Essays Two,” Lydia Davis’s new collection of 19 pieces on translation and the learning of languages, all written over the past two decades, offers overwhelming proof of the benefits to a writer of a practice of translation. This claim makes “Essays Two” sound like a book that will delight only philologists and polyglots when, in fact, readers with no interest in translation, little taste for essays and zero desire to become writers will nonetheless find themselves burning through its 571 pages with equal parts confusion (What on earth is happening to me?) and relief (Thank God this is happening to me!), and, finally, recognition that the mind we’re meeting on the page is awake to the world in ways that feel necessary and new. “Essays Two” joins “Essays One” (2019), Davis’s collection of 35 pieces on writers and writing, the two volumes conspiring to a singular astonishment of pleasures. 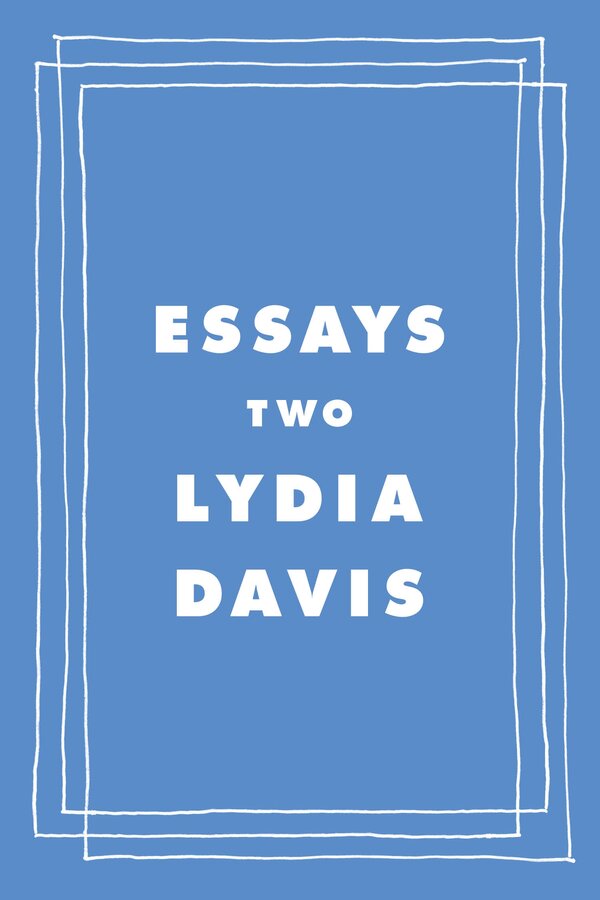 Since Davis began publishing stories in the 1970s, a career commemorated in 2009 with the publication of her 700-page “Collected Stories,” a book that argued for her lasting place in American letters, she has had a parallel career as a translator. Davis has brought two dozen French authors into English, some in a mode of advocacy (Danièle Sallenave; Conrad Detrez), some as acts of critical admiration (Maurice Blanchot, Michel Leiris) and some needing no qualification (Proust, Flaubert). And yet, “Essays Two” makes clear that Davis hasn’t had two careers running in parallel, hasn’t attended to translation as preparation for becoming a writer, so much as she has translated throughout her writing life as a way of regularly renovating her relationship with language, a constant tuning of her instrument.

There are any number of amazements in “Essays Two.” Some involve deep dives into a writer, others brief, bracing immersions. There are seven separate engagements with Proust, essays approaching the author’s work from different directions but all centered on Davis’s translating of “Swann’s Way.” We learn, for example, that Davis first read Proust 25 years before she began her translation, and at the time she didn’t, or wasn’t able to, finish reading even that volume, the first of Proust’s seven-volume novel. Rather, she read the final third only as she translated it — an idea that for many of us might seem counterintuitive: Mustn’t one have first read a book to translate it? Davis’s experience flips the idea: How can one read a book if one isn’t first translating it?

“What is hard to determine,” Davis writes, “is what sort of influence reading Proust for the first time had had on me as a young writer.” In “Hammers and Hoofbeats,” an essay that made my brain’s jaw drop as I read it, Proust’s influence on Davis materializes as she thinks through, or imagines, the sounds Proust would have heard as a child:

The sounds in the city (either in his parents’ apartment or in his uncle’s house in Auteuil), outdoors: birds warbling and chirping in the garden, voices in the garden calling and shouting, laughing, occasionally singing, sung music and instrumental music; his own piano lessons and practice, and his brother Robert’s; musical instruments being practiced in different apartments in the neighborhood; voices practicing scales and songs and arias (some of the same sounds that you hear now in a bourgeois neighborhood, and that you hear in Hitchcock’s “Rear Window”); people calling their pets; dogs barking — I don’t know what the laws were then regulating pets or other animals roaming free in the streets, about 1885; cats meowing or caterwauling in the middle of the night; people whistling; footsteps on sidewalks; tradesmen calling their wares through the streets; horses’ hoofbeats, trotting and walking; carriage wheels rattling on cobblestone and grinding over dust and dirt over stone (i.e., the steady sound of wheels under the regular rhythm of the hoofbeats either pacing or trotting); in the carriage, the creaking of the wood and leather along with the hoofbeats and wheels.

This 187-word sentence is a list, grammatically a sentence fragment, one constituted of 14 dependent clauses that evoke the fragmentary nature of sensation, offering a sonic portrait of a provincial past. Not in 14 lifetimes would it have occurred to me to imagine what Proust (or any writer) would have heard in childhood, but Davis’s attention to the idea puts the reader into different proximity to what translation does and what writing as a practice demands and too frequently overlooks: an osmotic awareness of the world, a quality of vision and audition that a writer transfigures into a sequence of — not words — sound. The yield of that attention is delivered in Davis’s subsequent, grammatically ironclad, sentence:

Carillons from churches; church bells sounding the hours, tolling for deaths, clamoring for weddings: Think of Proust’s description of the tears he continues to shed inside himself even now that he is an adult: They are, he says, “like those convent bells covered so well by the clamor of the town during the day that one would think they had ceased altogether but which begin sounding again in the silence of the evening.”

The alliterative c’s that run through Davis’s phrases and carry over into Proust’s; the “ow” that rings five times, from Davis’s “sounding” to Proust’s: Davis’s and Proust’s sonics marry at the second colon, Davis’s exquisite “tolling for deaths, clamoring for weddings” performing the loss and gain of life and memory — bells so greedily alive they demand not death but joy. Here we find an answer to Davis’s question of influence, Davis not sounding like Proust but thinking, unintimidated, collegially, with him.

Engagements like these populate “Essays Two,” making a reader want to return to reading, not to say living, with a different, Davislike (ugly word for beautiful idea) attention. The most surprising such acts of attention in the collection, and the most illuminating of the practice of translation to the monoglot, are conceptually the least promising. “I do certain things backward,” she tells us, a claim that certainly applies to her learning Spanish by reading “The Adventures of Tom Sawyer” in Spanish translation and then translating the Spanish into English and then comparing her translation of it with Twain’s original, not to see what is lost in translation but gained through its practice: in part, a more precise sense of Twain’s singularity.

There are also Davis’s accounts of translating English books into English — Laurence Sterne’s “A Sentimental Journey Through France and Italy” (1768); the children’s book “Bob, Son of Battle” (1898) — older Englishes into contemporary English, an effectively foreign language into a domestic one, what all translation ultimately, inevitably, entails. Other essays have Davis learning Dutch and Norwegian, documents of ingenuity and curiosity that make the reader — while reading them, at least — think: I could, no, should, do that too. That one won’t hardly matters. Mystically, the essays make one feel one has.

The final essay in the collection, “The City of Arles,” is the seeming outlier, about Davis’s time in and research on the French city of Arles. Davis calls the piece “notes” — the word comes from Latin, where it meant “a mark” — and composes it as a series of discrete stories with names (“A Single Sheep and a Doorway”; “The Mosquitoes of Arles”). The essay is an attempt, through attention, to transmogrify a city into a substance, to seek the words that might — as Davis’s body of work, through time, continues to do — translate the hidden marks in which the world is written.

Wyatt Mason is a contributing writer for The Times Magazine and a writer in residence at Bard College, where he is a senior fellow at the Hannah Arendt Center.