The mystery of Wright Morris isn’t why he’s so forgotten, it’s that he was never much known in the first place. Because it’s true that Morris was, if never a household literary name, at least mentioned among (need I say it?) the male literary heavyweights of his day. A finalist for the National Book Award numerous times, Morris won it twice, in 1957 for “Field of Vision,” and in 1980 for his final novel, “Plains Song.” A celebrated photographer as well, Morris’s work was exhibited at the Museum of Modern Art as early as 1941. All told, between 1942 and 1986, Morris published 33 books, including novels, prose fiction and photographs (what he referred to as photo-texts), essay and story collections, and memoirs. A Nebraska native, Wright Morris spent much of his life in California remembering, and more important, reimagining, the Midwest. He died in 1998 at the age of 88.

When I’m asked about my desert island book (weird question, wouldn’t I be preoccupied with foraging or trying to figure out how to send smoke signals?) I always answer: “Plains Song.” This is often followed by, “Oh, I love that book!” No, I say, not Kent Haruf’s “Plainsong,” a perfectly fine if, forgive me, conventional novel. I’m talking about Wright Morris’s “Plains Song.” Two words and “Plains” with an “S.”

Forgotten, yes, but still among us. There will be no splashy Wright Morris revivals. No tale of a best-selling novelist stumbling across one of his books at a yard sale in Schenectady and raising him from the dead. Morris has remained in print all these years, albeit due to the selfless commitment of the University of Nebraska Press and not the bigger houses that used to publish him: Knopf, Harper and Row, Scribner. Each let Morris go after poor sales. When Viking brought out an edition of the Portable Morris, hoping to do for Morris what a portable did for Faulkner, the editor wrote, “We, who look forward to each book of his as it is announced, and talk about it with excitement when it appears, cannot understand why so many pulses remain calm.”

This piece is only the latest in a line of attempts to quicken more pulses and bring attention to a writer hidden in plain sight. The list of Morris’s appreciators stretches back to the beginning of his career, and includes Saul Bellow, Eudora Welty, Maxwell Perkins, Wallace Stegner, Richard Howard, Rosellen Brown and Larry McMurtry. In 1957, Ralph Ellison wrote in a letter to Albert Murray, “We got to London and we found a copy of Wright Morris’s ‘Field of Vision,’ which is quite a good, quiet novel. That Morris is probably the most skilled of the younger novelists, he just won’t open up with all he has.”

More recently, the poet John Hollander introduced a reissue of “The Home Place,” and Charles Baxter, long one of Morris’s most insistent champions, wrote a radiant and to my mind definitive introduction to a new edition of “Plains Song” in 2000.

But, like I say, I’m not shocked. If, as I contend, Morris is among the most innovative (and profound and funny) American writers of the last century, he’s also one of the most enigmatic and unpredictable. Even during his brief heyday in the 1950s, many readers might not have known what to make of him. If I told you the premise of “Field of Vision,” you might scratch your head. (Two old friends from Nebraska meet up randomly in Mexico and go to a bullfight. One of the friends is traveling with his family, the other has brought along, to Mexico, a psychiatrist who, in turn, has brought along one of his patients. See what I mean?) Morris specializes in what I’d call American oddness. He’s drawn not to what makes Midwesterners homogeneous but to what makes us strange. Morris’s people, even when they are staunch conformists, aren’t quite like anybody you’ve ever met. Not only this, they aren’t like anybody they’ve ever met, either. Morris, I believe, woke up every day thunderstruck at the variety of human existence — in Nebraska alone.

Morris knew that people don’t come in types no matter where they come from, and yet, at the same time, there isn’t any escaping your birthright. So no matter where you go, even if you don’t go anywhere, you drag around where you come from. As much as he was interested in people, Morris was equally obsessed, in both his prose and photography, with what he saw as the populated emptiness of abandoned spaces. Rusting farm equipment, old shoes, discarded clothes, yellowed mattresses — all were stories left behind. In “The Home Place,” a photo-text, he wrote, “What is it that stirs you about a vacant house? I supposed it has something to do with the fact that any house that’s been lived in, any room that’s been slept in, is not vacant anymore.”

Some devotees, and there are so few of us sometimes it feels as though we all know each other, consider “The Works of Love” (1952), the apex of Morris. A tribute to his father (Morris’s mother died when he was only six days old), “The Works of Love” is about one man’s search, not for love itself, but to the secret of holding on to it, if only for a little while. The novelist Michael Parker told me recently, “The book aches, that’s all I can say. Even when I’m not reading it, ‘The Works of Love’ sits on my shelf and aches.”

And there are others, so many others, not all of which are set in Nebraska. “One Day” (1965) is an account of the reaction of the people of Escondido, Calif., to the assassination of President Kennedy. A veterinarian remarks, “Who could say when this day had begun, or would ever end?” There’s “Love Among the Cannibals” (1957) set on the beaches of Los Angeles, an attempt by Morris to write about people who don’t live in the past at all. For me, it’s his least compelling book, though I might add it’s the only book of Morris’s that sold decently. There’s the wacky “Fork River Space Project” (1977), which asks the essential question: Did Fork River, Kan., disappear in a cyclone, or was the entire town abducted by aliens?

I’ve spent better part of the last year and a half reading Morris, a wild ride. As disorienting as his work can be, it’s joyfully immersive. There’s nothing tentative about Morris’s fiction. You enter his universe whole hog. However, the book I come back to, again and again, is “Plains Song.” I believe Morris needed to write 18 novels before he could, at last, return to home ground. It’s here that he takes up Ellison’s challenge and opens up with all he has. He does so, and this is key, by writing Nebraska from a female perspective. There are men in “Plains Song,” but they aren’t especially relevant. It is the novel’s women-centric vision that makes the novel so majestic.

“Plains Song,” a remarkably distilled novel which nonetheless spans the early years of the century into the 1970s, revolves around the women of the Adkins family. Sharon Rose has no business being born into this family of farmers and farmers’ wives. Her mother is dead. Her Aunt Cora and her cousin Madge live next door. One day it dawns on Sharon Rose as it does on so many of us, Wait, I belong to these people? And yet it is Sharon Rose’s relationship with Madge that tethers her existence, even after she flees the farm at the earliest opportunity, first to study music in Lincoln, then Chicago, eventually taking a teaching job at Wellesley. It is this contradiction that drives a stake through the heart of the book. As the two girls grow up, Sharon Rose can’t help but feel betrayed when Madge becomes interested in boys. After Madge becomes engaged, Sharon Rose shouts, “Is he looking for a wife or a housemaid?” Aunt Cora overhears this and whacks Sharon Rose with a hairbrush. But Madge calls out, in a remarkable act of generosity that catches my throat every time, “She don’t mean it the way you hear it.”

She don’t mean it the way you hear it. Maybe only somebody you’ve known your whole life could muster this sort of understanding? I read “Plains Song” once a year. I don’t reread it. I read it to remind myself, again, because I have, again, forgotten, how fleeting it all is. How the things I think I’ll be able to hold on to, my family, my young kids, my work, will be outside of my grasp soon enough. Will I ever learn? Time. Few novels that I know of capture the bewilderingly inconsistent nature of time quite like “Plains Song.” Years pass in clauses; people die midsentence. Sharon Rose’s mother, Belle, lives for roughly 19 pages out of a total of 227. I brace myself every time I reach the lines, “Belle had spells of moodiness and Orion might wake up and find her missing and have to search for her. Walking at night relieved her …”

And I think: Can’t she just live this time?

I could go on, and on, obviously. But let me say this, by the end of the novel, when Sharon Rose returns to Nebraska after 28 years, you might think it’s too late for her to find love. She had a chance at it, once, with Lillian Bauman, her classmate from Chicago. But that was long time ago now. It’s in the last pages that Morris pulls off a dumbfounding triumph. I tend to like my books morose or not at all. Yet “Plains Song” ends optimistically, and this ending, impossibly, takes place at a crowded motel in Grand Island where women from around the world have gathered for a convention.

“I’m coming,” Sharon Rose says. “I’ve not seen a sunrise since I was a child.”

Forget the desert island. Call “Plains Song” my deathbed book, and I hope to be holding it, trying to read one more sentence before the light goes out.

One way to go with Wright Morris is to start with the last, and, if you listen to me, greatest book. But Morris contains multitudes and there are Morris novels for almost any mood one might imagine, and though he is always funny, some books are more mournful than others.

‘COLLECTED STORIES OF WRIGHT MORRIS’ Though I’d argue that Morris usually needs a more expansive canvas, he wrote some indelible stories, including, “A Fight Between a White Boy and a Black Boy in the Dusk of a Fall Afternoon in Omaha, Nebraska,” and my personal favorite, a story of unusual emotional power, “The Origin of Sadness.”

‘CEREMONY IN LONE TREE’ The unruly sequel to “Field of Vision,” set in Nebraska, amid news reports of the murder spree of Charles Starkweather and Caril Ann Fugate, the duo later immortalized onscreen in Terrence Malick’s “Badlands.”

‘FIRE SERMON’ and ‘A LIFE’ Two intense, radically compressed road novels from 1971 and 1973, respectively, books that catapult across the page.

‘WRIGHT MORRIS TERRITORY’ An eclectic anthology of novel excerpts, stories and essays, some of which can’t be found anywhere else, edited by David Madden.

Peter Orner’s latest book, “Maggie Brown & Others,” was published this month. He teaches at Dartmouth College.

The Enthusiast is an occasional column dedicated to the books we love to read and reread. 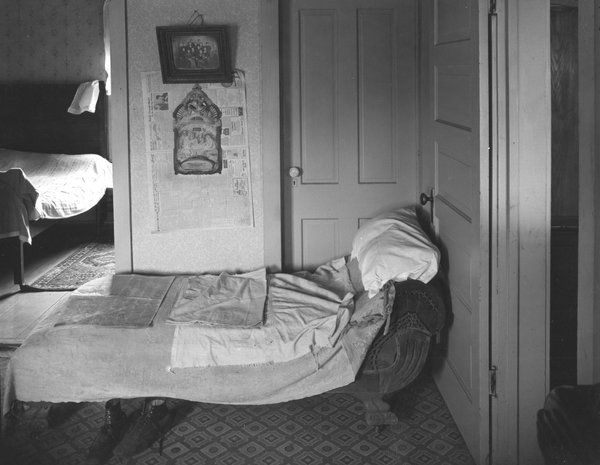