IN THE LAND OF THE CYCLOPS
Essays
By Karl Ove Knausgaard

“In almost everything I have written there is a longing for boundaries,” Karl Ove Knausgaard writes in an essay about his editor, Geir Gulliksen. It’s a somewhat baffling confession coming from a man whose name has become synonymous with literary excess, a writer whose six-volume autobiographical novel, “My Struggle,” obliterated the usual distinctions between literature and life. And yet, Knausgaard’s critical writing does return obsessively to the question of artistic limits. “I long to be free, totally free in art, and this to me is to be without politics, without morals,” he writes in another essay, about the American photographer Sally Mann. But even the most simple representations, he concludes, prohibit such freedom, for artist and audience alike. “If we look at a picture of a tree, we are immediately caught in a net of politics and morals, ethics and sociology — for gender and class are also involved — and if I try to wriggle free of this net of distinctions, I simply become more and more entangled.” 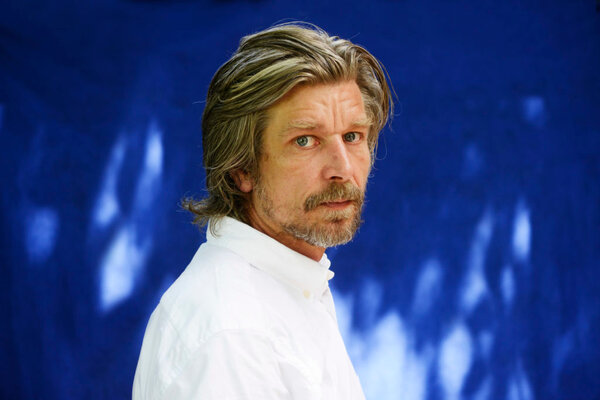 Both essays appear in “In the Land of the Cyclops,” the Norwegian author’s first book of essays to be published in English. Reviewers of “My Struggle” frequently praised Knausgaard’s essayistic talent, and readers who enjoyed the novel’s digressions on, say, Dostoyevsky or Paul Celan will find here the same mingling of critical and personal reflection. A meditation on the northern lights detours into musings on Proust and Pascal. A diaristic piece on Dante’s “Inferno” slides effortlessly between visions of hellfire and the hushed winter landscape of Sweden.

The collection, which also includes essays on Michel Houellebecq, Cindy Sherman and Kierkegaard, reads less like a book of criticism at times than a work of negative theology, circling the mysteries of artistic creation that cannot be directly articulated: What makes a book or a painting feel alive and relevant? Why should art, which occupies the realm of pure fantasy, have any rules at all? On one hand, Knausgaard argues that Knut Hamsun had to abandon “every semblance of self-censorship” in order to inhabit his characters, and that Ingmar Bergman’s genius came from depths of the unconscious, “where boundlessness prevails.” But other pieces consider work that was produced under strict constraints. To write “Madame Bovary,” Flaubert had to abandon the “recklessness” of his early, lyrical work. Raymond Carver’s distinctive style, he notes, owed much to the interventions of his editor, Gordon Lish.

This obsession with boundaries arises in political contexts as well. In several pieces, Knausgaard bemoans liberalism’s quest to eliminate the borders between countries and the distinctions between men and women. Delineations are a way of creating difference, he believes, and “meaning is something that arises in the world of differences, never in the world of sameness.” The variety of contexts in which this theme emerges throughout the book — the threshold between body and mind, between art and life, between night and day — suggests an almost medieval belief in the power of abstraction, as though all these ideas pointed to the same metaphysical truth. Can anything definitive be said about “boundaries” when the word applies to so many different phenomena?

In most cases, however, these airy speculations are saved by moments of self-searching that bring the meditation back to the personal and the concrete. To some extent, the collection is an extended reckoning with Knausgaard’s own creative process, an attempt to reconcile his longing for limits with a more instinctive desire to escape the world and its social structures and live in the wilderness of artistic freedom, a place he calls “the outlands of the soul.” This is less a conflict, in truth, than a useful tension. Art may be a sphere of freedom, he concludes, but it maintains a porous border with life and depends on an elusive symbiosis. The writer who wants to capture both the particular and the universal must live in the uncertain terrain that lies between these two realms, “a place where the social does not exist, but from where it can be seen.”

This artistic vantage, which Knausgaard inhabits so artfully throughout the collection, is abandoned rather abruptly in the title essay, which adopts a more defensive tone. The piece is, in part, a response to his feminist critics, particularly the Swedish scholar Ebba Witt-Brattström, who in 2015 called his first novel, about a teacher who sleeps with his 13-year-old student, part of a trend of “literary pedophilia.” For Knausgaard, the “land of the Cyclops” is Sweden, where he’s lived since 2002 and which he lambastes for its blinkered views on race, gender and immigration (the allegory begs to be read more expansively, as a rant about identity politics). “The Cyclopes can’t handle ambiguity,” he writes. “They don’t understand anything that isn’t either good or bad, and that makes them angry.” But it is here that all ambiguity flies out of his own prose. Whereas artistic freedom was, in other essays, a hard-won virtue the writer had to constantly negotiate with the world at large, it is now an unqualified right, “the only thing that really matters when it comes to literature.”

It is strange that Knausgaard, given his thematic fixations, fails to mention that the Cyclopes were, in Greek mythology, wall builders, responsible for constructing fortifications on the Peloponnese. Nor does he consider that what he deems black-and-white thinking might be someone else’s attempt to erect distinctions and create meaning. The essay is a blight — an outsize one, given that it shares the book’s name — on an otherwise fine collection and flatly contradicts what he has argued throughout its pages. No writer can escape the “net of politics and morals, ethics and sociology” that is the world itself and extends even to the dusky outlands of the soul, which has never maintained a privileged place in the culture. It is unfortunate when one of the very best occupants of that terrain ceases to see this as a necessary constraint and instead regards himself as the lone exile in a world full of monsters.