THE GREEN NEW DEAL
Why the Fossil Fuel Civilization Will Collapse by 2028, and the Bold Economic Plan to Save Life on Earth
By Jeremy Rifkin 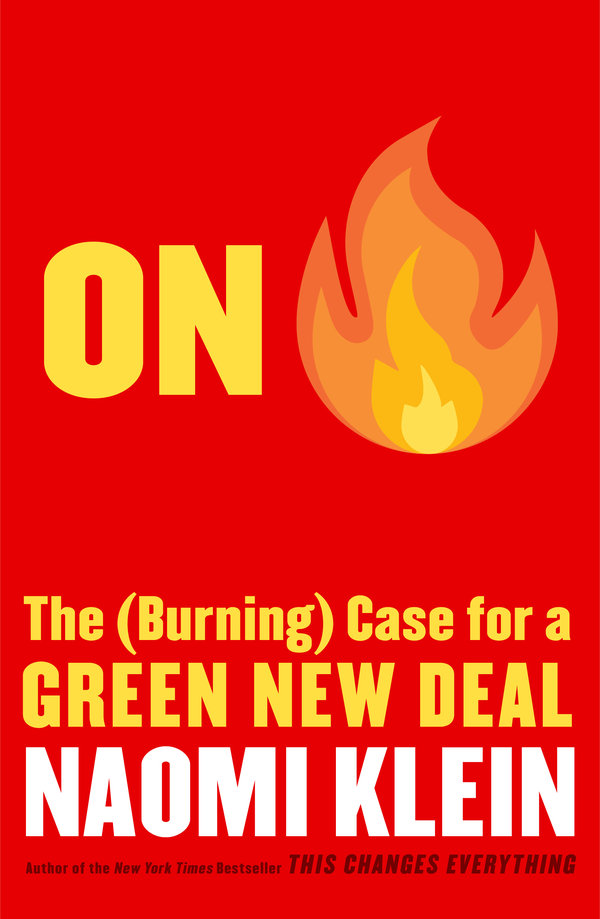 If I were a rich man, I’d buy 245 million copies of Naomi Klein’s “On Fire” and hand-deliver them to every eligible voter in America. I say this not because Klein’s book is flawless — far from it — but because it makes a strong case for tackling the climate crisis as not just an urgent undertaking, but an inspiring one.

Klein is a Canadian journalist and activist whose previous books include sharp, well-reported critiques of corporations and capitalism. In “On Fire,” she finds a lot to love in the Green New Deal, the purposefully vague, aspirational plan progressive Democrats have advanced to cut carbon pollution and transform society through environmental reform.

It’s a thin skeleton for a book: Right now, the Green New Deal is no more than a 14-page-long congressional resolution put forth last February by Representative Alexandria Ocasio-Cortez of New York and Senator Ed Markey of Massachusetts. It calls on Congress to pursue a “10-year national mobilization” that would zero out carbon emissions, reinforce our nation’s infrastructure to better withstand natural disasters, develop an energy-efficient smart grid, upgrade all buildings to achieve maximum energy and water efficiency, and the list goes on, including guaranteeing everyone a “family-sustaining wage” and access to quality health care.

The resolution may be a green fever dream of progressives like Ocasio-Cortez, but it’s the boldest attempt yet at a policy agenda that matches the scale and scope of what’s needed to sustain civilized life on our superheated planet. Its influence has already been felt in the 2020 presidential race, in which many of the Democratic candidates have announced aggressive climate plans rooted in the Green New Deal.

Republicans, on the other hand, are already targeting the resolution as a socialist plot to ban hamburgers and destroy capitalism. It’s not hard to understand why. Implicit in the plan is a fundamental reimagining of the role of government, one that harks back to F.D.R.’s New Deal in the 1930s. It is also a rethinking of how to break the logjam on climate policy in Washington. Instead of fighting incremental battles on cap-and-trade and carbon tax, the Green New Deal seeks to ignite a popular movement that breaks through today’s toxic partisanship with sheer human will.

Thankfully, Klein is not interested in fleshing out policy details — or, for that matter, in working out the numbers on how to pay for it. She’s interested in making a moral argument for why it is necessary. To Klein, climate change isn’t simply another important issue; it’s “a message, one that is telling us that many of Western culture’s most cherished ideas are no longer viable.”

She views this crisis as one “born of the central fiction on which our economic model is based: that nature is limitless, that we will always be able to find more of what we need.” The days of these Enlightenment ideals are over, Klein says: Our current world is “built on false promises, discounted futures and sacrificial people; it was rigged to blow from the start.”

Among the burgeoning global movement of young environmental activists the book chronicles is the Swedish 15-year-old Greta Thunberg, who has galvanized audiences from Davos to the United Nations with her blunt shaming of inaction by politicians and corporate executives in the face of looming catastrophe. Thunberg is the book’s hero, the brave warrior who speaks truth to power: “The clarity of Greta’s voice gave validation to the raw terror so many of us have been suppressing and compartmentalizing about what it means to be alive amid the sixth great extinction.”

Klein knows the Fox News crowd will be quick to label her and other Green New Deal advocates as commies. In fact, she goes out of her way to argue that we shouldn’t toss out capitalism, but that it needs to “shift to a dramatically more humane economic model.” She is especially sharp about the failures of trickle-down economics, which was supposed to help everyone on the planet: “What has happened instead is that the indifference to life that was expressed in the exploitation of individual workers on factory floors and in the decimation of individual mountains and rivers has instead trickled up to swallow our entire planet.”

But the author is also attuned to the risks of revolution, to the links between recent mass shootings and a doomsday brand of eco-fascism that sees migrants (many of whom are driven out of their homeland by climate change) as dangerous invaders. “Let there be no mistake: This is the dawn of climate barbarism,” she writes. “And unless there is radical change not only in politics but in the underlying values that govern our politics, this is how the wealthy world is going to ‘adapt’ to more climate disruption: by fully unleashing toxic ideologies that rank the relative value of human lives in order to justify the monstrous discarding of huge swaths of humanity.”

Klein is a skilled writer, even if at times she tries a little too hard to be a voice of reason. Unfortunately, the structure she employs is hodgepodge and repetitive, built on speeches and previously published essays written over the last decade. Although she updates each chapter with new footnotes, some still feel dated or perfunctory. A section on geoengineering — large-scale manipulation of the earth’s climate — is downright dogmatic in its dismissal of the idea. Yes, techno-fixes like fertilizing the ocean with iron or injecting sulfate aerosols into the upper atmosphere are risky. But there is a big difference between reckless strategies and intelligently designed ones. Klein can also sound like a detached elitist when she suggests consumers stop buying junk and spend more time in nature, or looking at art. 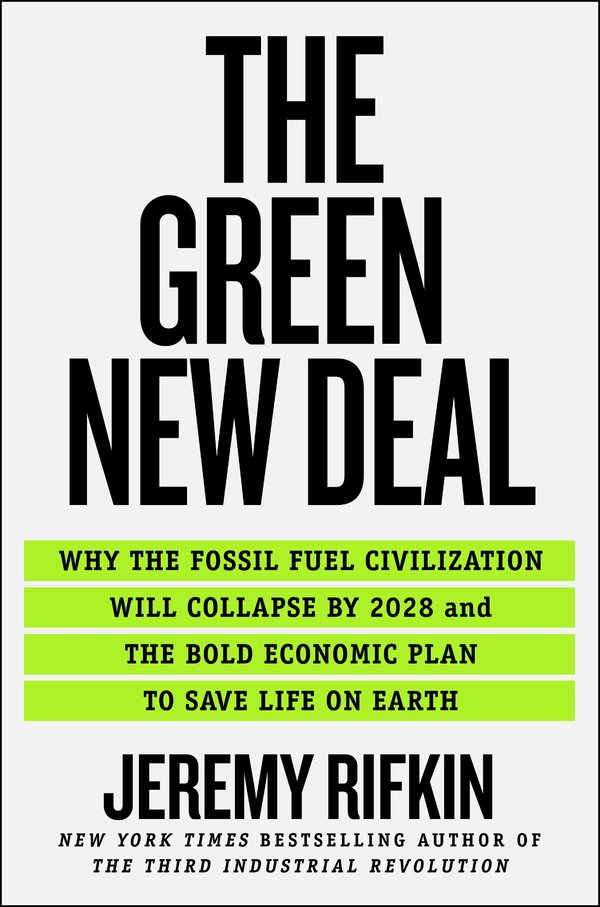 Rifkin predicts the fossil fuel bubble will burst in nine short years (why he chooses 2028 rather than, say, 2025 or 2035 is unclear), ushering in a “zero-carbon Third Industrial Revolution.” But his writing is so clotted with numbers and stats and technological jargon that it’s not easy to figure out exactly what he thinks this revolution would look like, beyond the usual futuristic shout-outs to renewable power, smart buildings and Big Data. “The digitalized Communication Internet is converging with a digitized Renewable Energy Internet,” he explains, while at the same time “a digitized Mobility and Logistics Internet” sits “atop an Internet of Things (IoT) platform,” etc. That’s a lot of internets. Rifkin argues that all this convergence will lead to a new era of “social capitalism” in which “the market is a guardian angel looking over humanity.” But he says little about the dark sides of technological progress — alienation, siloed information, privacy abuses, destruction of the natural world.

Rifkin’s insights about potential revenue sources for new green infrastructure aren’t new — he offers a familiar mix of military cuts, higher taxes for the superrich, ending federal subsidies for fossil fuel industries, green bonds and public-private partnerships. He’s best at articulating the huge financial risks the oil, coal and natural gas industries face from stranded assets — all the pipelines, ocean drilling platforms, ports, mining equipment and power plants that will soon be obsolete. He cites a 2015 Citigroup report that $100 trillion worth of fossil fuel assets could soon be “carbon stranded.”

Even in Rifkin’s muddled techno-utopianism, there is an unmistakable sense that with catastrophe comes opportunity. The big question is: Will we seize this moment to create a more just, more equitable, more resilient world — or just sleepwalk into chaos and oblivion? Klein quotes Kate Marvel, a climate scientist at Columbia University and NASA’s Goddard Institute for Space Studies: “We’re not doomed (unless we choose to be).”

Jeff Goodell’s most recent book is “The Water Will Come: Rising Seas, Sinking Cities, and the Remaking of the Civilized World.”