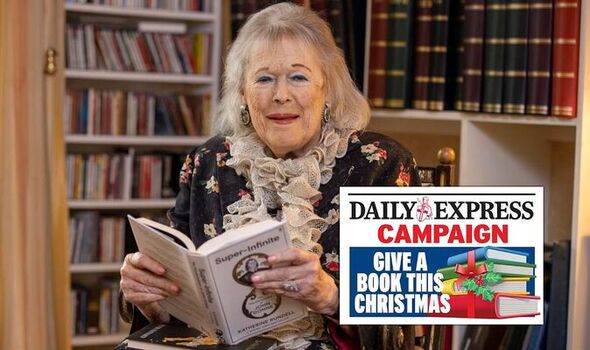 Now in her 91st year, books remain a constant for the widow of playwright Harold Pinter, who died on December 24, 2008.

“Books and literature meant everything to us,” she recalls of their intense 33-year-long relationship, once described by Pinter’s biographer as “the most celebrated modern literary marriage”.

Indeed, Lady Antonia says the biggest problem they faced when the lauded playwright moved into her Holland Park home in 1977 was finding the space to amalgamate their two libraries.

“When I was writing, I would meet Harold at lunch, and he was terribly good – I would show him a chapter. He knew nothing about history, but everything about language.”

She adds with evident delight: “And from 1975 I was the first person to hear his new plays. He would stand in front of me and act them out.”

In 2011, Lady Antonia agreed to become patron of a new charity called Give A Book which launched in the same year and is partnering the Daily Express for our 2022 Christmas charity campaign.

“I read the name of the charity, Give A Book, and I thought they are two things I like very much,” explains Lady Antonia, who insists I drop her title when I address her. “One is giving and the other is books. Generosity and literature – it’s a thrilling contribution.”

The charity promotes the pleasure of reading in the hardest-to-reach places. Its core belief is that to pass on a good read – to give a book – is a transaction of lasting worth.

“We work in prisons, schools and with disadvantaged young people throughout the UK. This is at the heart of everything we do,” says executive director Victoria Gray.

Victoria set up the charity in tribute to her late husband, the playwright and diarist Simon Gray, who was Harold Pinter’s best friend. Antonia continues: “I discovered the charity is run entirely by Victoria and a small team, and with very low overheads.”

Its work could not be more timely. Research from the National Literacy Trust has revealed that children who don’t own a book of their own are nearly four times more likely to read below the average expected level for their age.

Meanwhile, the most recent data published by the Ministry of Justice show 57 percent of adult prisoners taking initial assessments had literacy levels below those expected of an 11-year-old. Being unable to read makes it less likely that they will get into work and more likely that they will reoffend.

“All prison-based literacy campaigns are good,” insists Lady Antonia, who gives great credit to the work of Camilla, the new Queen Consort, in this area.

“Once you can read you have power: ditto for disadvantaged children. Books are magic carpets. They allow travel to unknown realms, which is the one thing you can’t
do in prison.”

Give A Book works in prisons in various ways, including the initiative Making It Up, in which prisoners create original storybooks to present to their children. This is informed by research showing that family contact for prisoners is key in aiding rehabilitation.

“This project interests me very much,” says Lady Antonia. “Fathers relating to their children through the power of imagination and creating something together. This is so positive.”

Antonia, the eldest daughter of the 7th Earl of Longford – the long-serving Labour politician and advocate of social causes and penal reform who died in 2001 – is beginning to lose her hearing.

“But one thing I can go on doing for the rest of my life is reading,” she declares. “I might read a book a day; I spend all the time reading when I’m not doing anything else. I’ve just finished a wonderful book about Ireland, by Mary Kenny, and now I’m reading The School That Escaped The Nazis, by Deborah Cadbury, which is terribly good.”

And she is not averse to reading Trollope on a Kindle device either: “Real books are lovely, but a Kindle is so handy for travelling,” she insists.

Her children, grandchildren and great-grandchildren all receive book tokens as presents. Her 30th book – a biography of Lady Caroline Lamb, the Victorian novelist who had an affair with Lord Byron – will be published in May. She can’t say if there will be another book after that, so immersed is she in the current project.

“During lockdown, I was dusting unfamiliar places – very unfamiliar places,” she giggles. “When a book dropped down hard on my foot – a short life of Lady Caroline. So, she insisted on being written.” So write it she did.

Antonia was the eldest of her parents’ eight children. Her mother, Elizabeth, Countess of Longford, was a British historian and biographer who became best known for her studies of Queen Victoria, Lord Byron and the Duke of Wellington. She was 26 when Antonia was born.

“I could read by the time I was three; my mother gave me the greatest gift a parent can give a child.

“My memories are of her reading Walter Scott and skipping all the boring bits – I thought he was the most exciting writer in the world. Because I’m a quick reader, I’d go downstairs and secretly read on. The rest of my life has been reading books.”

Now her six children have grown up – her three daughters all became writers or biographers – she can yomp through a book a day. “When I was a teenager, and travelling by train, I would turn the pages so fast that disapproving men, like vicars, would say, ‘I hope you don’t think you’re reading that’.”

She remains a devotee of libraries – she’s a vice-president of The London Library.

“As a teenager growing up in Oxford, I would walk to the public library, take out a book, read it, and walk back the next day to get another.”

Antonia’s first husband, and father of her children, was the Conservative politician Sir Hugh Fraser. Married in 1956, they divorced in 1977, three years before she married Pinter who declined a knighthood in 1996, but became a Companion of Honour in 2002.

Three years later he won the Nobel Prize for Literature – the greatest accolade for any writer in the world.

By the time the couple met, in the mid-1970s, Pinter had already “written an awful lot of plays”, she says. “He was like a writer in a novel. He would simply get an idea, and then go and write it.”

After they met, her own writing career evolved a a new direction when she started writing crime fiction.

“History is my life, it’s been the centre, but the crime novels were a fun diversion. I’ve read crime fiction all my life, and came to start writing it when Harold and I were having a holiday together in the very hot summer of 1976. I was supposed to be working on Charles II.”

In all, she wrote a dozen Jemima Shore novels, and they had a degree of expediency about them. “It meant that when Harold and I travelled for his plays, I could sit in a hotel room and write.”

This obviated the need to cart around the copious research materials required for historical biography.

And she reveals that the creation of the fictional Jemima allowed for some alter-ego role play.

“I made her all I would never be: Unmarried and without children, slim and tall, with marvellous red hair, she wore white trouser suits that never got marked.

“I would like to own a white trouser suit that never gets marked,” she laughs, revelling in the other worlds that fiction allows; the reinvention of self, the ability to put on the clothes of another life.

“I love the idea of children being able to wander into libraries at schools and take books. This thrills me, the ability to discover for themselves and have that freedom of choice.”

She is concerned that there is no requirement, currently, for all primary schools to have a library. Meanwhile, for her 90th birthday, last August, she asked friends to donate to a new Give A Book initiative: Project 90.

Named for her seminal birthday, it is a collaboration between the charity and the National Deaf Children’s Society to help families of deaf children learn to read with sign language.

“Everyone who came to my birthday party was asked, if they wished to give me a present, to give a donation instead,” she adds. “It makes me so happy. I love the idea, and I feel I’ve done some good, perhaps. After all, giving books is the nicest present in the world.”