Lean, mean FIGHTING machines: The Spartans despised anyone weak or fat, drank blood soup and kicked their own buttocks in a brutal exercise regime. Such was their savagery that one mother bludgeoned her son to death with a roof tile for NOT dying in battle

The 2006 big box-office hit 300 memorably portrays the Spartans as muscular beardies in short red cloaks and skimpy black Speedos, with Gerard Butler kicking foreign ambassadors down a well while shouting: ‘This is Sparta!’

Now here’s a new history of these extraordinary and often terrifying people, which is both scholarly and highly entertaining. It’s no surprise to learn that much of that movie is pure Hollywood, but fascinating to learn how much of it is true. And some things about the Spartans are truly jaw-dropping.

Two-and-a-half thousand years on, they still symbolise the ultimate in martial courage and implacable savagery. From childhood, boys were raised to become warriors — and girls to become the mothers of warriors. 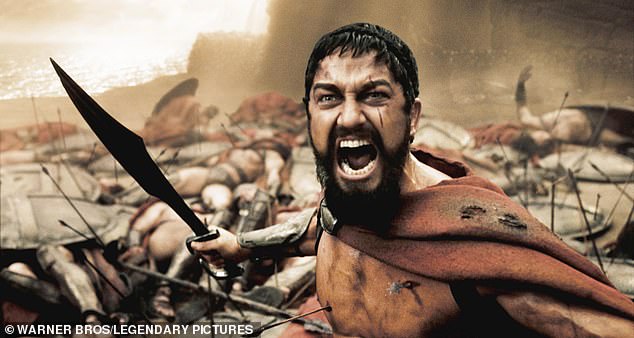 Once boys had attained manhood, they lived in communal messes, spending their days in gymnastics, running, boxing, wrestling, throwing the javelin and a team sport whose nature can be surmised from its name: battle ball.

They also exercised by . . . dancing. Except they danced wearing full bronze armour, weighing about 30kg, or 66 lb.

And, since this was Sparta, it was a war dance, ‘simulating dodging blows and missiles by swerving and ducking, leaping and crouching’.

Diet was simple and nourishing: barley cakes, figs, cheese, olive oil and the dreaded ‘black broth,’ a sort of blood soup. They also ate wild game, lamb or goat. Doughnuts were not on the menu: they despised anyone overweight — one was actually fined for getting fat.

Boys were kept hungry and encouraged to steal, but not get caught: useful practice for stealth operations when older. They slept on beds of reeds cut from the river, though in very cold weather they were allowed some thistle-down for extra warmth. What luxury!

Did they practise pederasty, like other Greeks? Certainly older men mentored younger boys, but at least one ancient writer says firmly that they regarded sexual relations between men and boys with as much disgust as they did incest.

Like many sexual practices from the past, it’s almost impossible to distinguish the truth from scurrilous gossip. Boys were expected to take jokes against themselves — the Spartans didn’t tolerate snowflakes — and they were renowned throughout Greece for their curt and cutting sense of humour. 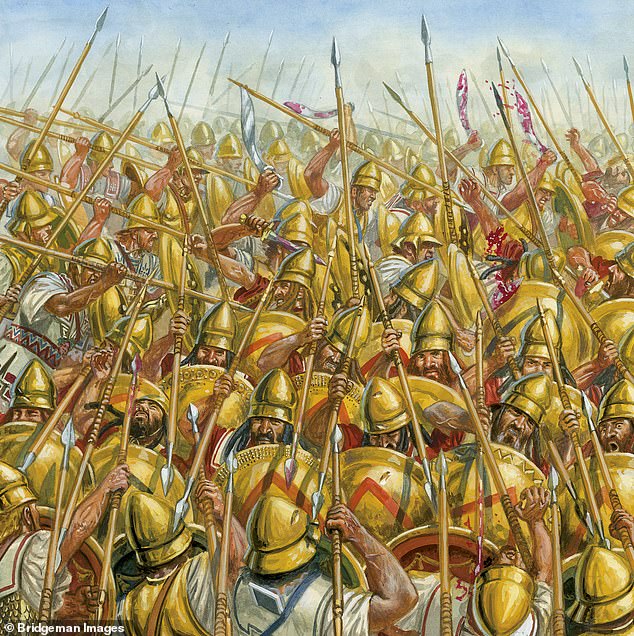 The Spartans regarded excess weight and wobble as signs of weakness, with the girls dancing naked in front of the young men so that they would be ashamed to be fat. Pictured: Spartans battle illustration

They even gave us the word ‘laconic’, from Laconia, the Spartan region of the Peloponnese. When Philip II of Macedon sent a threatening message to them, saying: ‘If I conquer Laconia, I will raze your city to the ground’ they replied with a single word: ‘If.’ Philip II of Macedon decided not to invade Sparta after all.

This may all sound ‘distinctly masculine’, says Bayliss, but Spartan women were also highly celebrated for their athletic, sunkissed, outdoor-type beauty. They would probably have made great cover girls for glossy fitness magazines. Classical poets praised their ‘lovely ankles’ and ‘hair that blooms like pure gold’.

Shocked (but no doubt rather delighted) foreign visitors recorded that the women wore white mini-dresses that exposed their thighs, toned from a particular exercise ‘whereby girls would jump up and kick their own buttocks, first with one foot, then the other, followed by both at the same time’.

One ancient Spartan epigram records a girl boasting that she managed 1,000 such jumps, ‘more than any other girl’.

Like the men, they had no truck with fat acceptance, and regarded excess weight and wobble as signs of weakness.

Indeed, Spartan girls would actually dance naked in front of the young men, so that, as Plutarch puts it, they would be ‘ashamed to be fat or weak’. 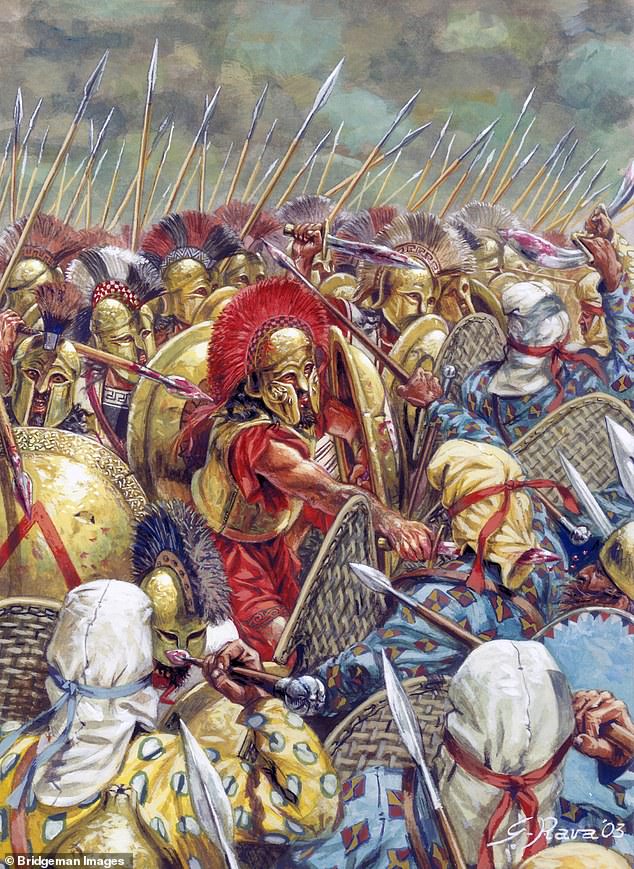 One mother killed her son by bludgeoning him with a roof tile after he returned home from a battle where all his comrades had fought to the death. Pictured: Spartan battle illustration

But the shaming culture worked both ways, notes Bayliss. Boys would have to prove themselves exceptionally strong and heroic to win such magnificent specimens of womanhood, and the girls would mock them if they failed.

Spartan women wanted warriors. One mother killed her son by bludgeoning him with a roof tile after he returned home from a battle where all his comrades had fought to the death.

Darker traits in Spartan society show how toughness can slide into mere brutality. They practised a ruthless eugenics, whereby sickly babies were simply killed and thrown down a crevasse. And they treated their slave class abominably.

The helots, who worked on the land growing all the food, had to endure the annual slave hunt, whereby young warriors were sent out to hunt down and kill any slaves they could find, as a kind of practice for war and to remind the underlings of their place.

The Spartans’ finest hour — in which all of Spartan history, tradition and training seem to find their fulfilment — was during three unforgettable days at Thermopylae, in late August, 480 BC. 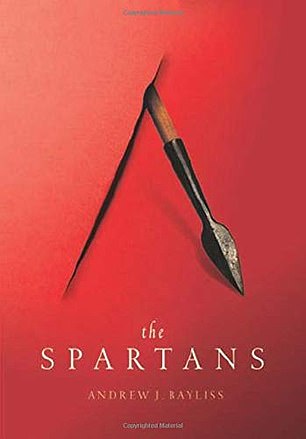 King Leonidas of Sparta led his 300 warriors out to face a Persian army of at least 100,000, perhaps twice that, with never a moment’s hesitation. His opponent, Xerxes, overlord of an Asian empire that stretched ‘from sunrise to sunset’, warned that he had so many archers, their arrows would darken the sky. ‘Good,’ said one Spartan warrior. ‘Then we’ll fight in the shade.’

Another message from Xerxes demanded that they lay down their arms. Leonidas himself replied to that one with the magnificent, ‘Molon labe’, meaning ‘Come and get them’.

The key to Leonidas’s feat of heroic resistance, apart from sheer bravery and fighting prowess, was geography. The Pass of Thermopylae, on the east coast of Greece, was no more than 100 metres wide.

‘Seemingly impenetrable cliffs rose to the landward side,’ says Bayliss, while on the other, ‘the sea crashed against the rocks’.

The 300 Spartans held out in the murderous bottleneck for an incredible three days and nights.

Finally betrayed and attacked from the rear, they died to the last man, but many thousands of Persians died with them in a bitter humiliation for Xerxes. All of Greece was inspired by their example, and all of Western civilisation since: its central assumptions about individual liberty and democracy flow from that sacrifice. It was bound to become mythologised.

But while the peerless warriors and their staggering bravery and contempt for death continue to inspire awe in us today, their cruelty and ruthlessness also inspire a certain repulsion.

The Spartans were no democrats: the Nazis admired their martial prowess and their eugenics, and in today’s Greece the neo-Nazi Golden Dawn party see themselves as modern-day Spartans defending their land against Asiatic invasion in the form of illegal immigrants from Syria, Iraq and beyond.

It seems that, whether we admire them or not, we are unable to forget them.

Which is just what the Spartans would have wanted.