Individual genius is a group accomplishment, and don’t let Flaubert tell you different. Mike Nichols, whose name stands alone on the marquee of Mark Harris’s gleaming, teeming biography, possessed wit, cunning, icy clarity, ravenous ambition and a knack for mimicking the qualms and quavers of neurosis, but none of that would have been set free if he hadn’t lucked upon the right tribe. 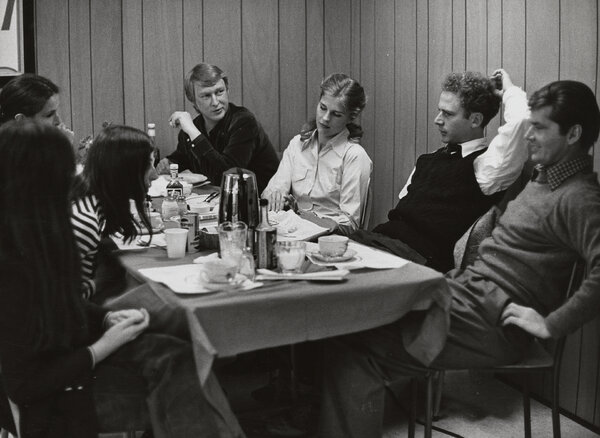 From earliest childhood Nichols felt the sting of stigma, the shame of exclusion. Medicine had dealt him a raw hand. At the age of 4 in his native Germany, which his Jewish family would flee during the Nazi terror, he received an injection of whooping cough vaccine that left him completely bald and unable to regrow hair, a pale salamander. When Michael and his younger brother, Robert, sailed to America in 1939 to meet up with their father, who had relocated to New York, he knew only two sentences of English, one of which was “Please do not kiss me,” intended to ward off the fussing attention that “the sight of a bald little uncared for refugee holding a 3-year-old’s hand was likely to engender among adults.” Nichols would soon learn that those his own age were less solicitous, the little monsters. At school he was mocked (“Hey, baldy!”), bullied and belittled, a self-described zero. Later he would be fitted with a wig and false eyebrows, but the constant, fidgety adjustment and telltale stink of acetone fed a prickly sense of self-consciousness and outcast condition. Unable to feel snug in his own skin, Nichols would find expression and fulfillment by converting his wary discomfort into the psychodrama of improv and sketch comedy, breaking out of his specimen jar and never looking back.

From the film historian who gave us “Pictures at a Revolution” and “Five Came Back,” undertaken with the blessing of Nichols’s widow, Diane Sawyer, and his three children, and fortified with a wealth of interviews that make the acknowledgments a red carpet roll call (Candice Bergen, Robert Redford, Meryl Streep…), “Mike Nichols: A Life” is a midcentury fairy tale of right place-right time-right crowd sis boom bah.

Stymied back home (where he sulked off from enrolling at N.Y.U. after learning “that incoming freshmen were required to memorize the school song”), Nichols headed to the University of Chicago, where he hoped to make a fresh start and shed his hangdog past. He that seeketh, findeth. The place was aswarm with kindred spirits and budding daredevils. His first day on campus he met a precocious 16-year-old bookworm named Susan Sontag, with whom he became friends for life. He fell into a conversation with one of the cafeteria’s busboys, Paul Sills, the son of the acting teacher Viola Spolin and the future founder of Story Theater; among his fellow students in Sills’s acting workshops were Ed Asner and Zohra Lampert, with whom he improvised a scene from Thomas Mann’s “The Magic Mountain” done entirely in gibberish. The most crackling, fateful encounter in that popcorn machine of future legend was with an enigma named Elaine May, an autodidactic rebel who arrived on campus like a dust devil. With her tousled hair and forbidding aloofness, May was a figure of bewitchment, la belle dame sans merci of the sardonic comeback.

Their introduction was not a traditional Hollywood meet-cute. She watched Nichols perform in a student production with “a sneer on her face,” having been briefed by Sills that here was the only person at the University of Chicago as mean and hostile as she was. It’s hard to resist such a powerful negative attraction and once they glided into their first improv together a beautiful union of misanthropes was forged. Where so many hip comics of the era riffed on topical references with staccato delivery (pre-eminently Mort Sahl with his rolled-up newspaper), Nichols and May delivered needlepoint duets of insinuation, jittery apprehension and flustered frustration that had the intimacy of overheard conversation, the tension of thought bubbles about to pop. An improbable sensation in nightclubs and on radio, TV and the Broadway stage, Nichols and May became the royal byword for literate satire until personal friction and temperamental differences drove them apart. They had gone as far as they could rubbing antennae together and they were too high-strung and self-propelled to mellow into a sweetheart act trotting out the same old crowd favorites.

After the professional breakup with May, Nichols was in a quandary. Sure, he was clever, all the papers said so, but that’s not enough to stay in the big leagues. “‘Oh, Mikey,’ said Leonard Bernstein after a long, consoling walk along Park Avenue. ‘You’re so good! … I don’t know at what.’” The “what” turned out to be as an actor-whisperer, the unflappable coaxer and cajoler of sacred monsters and skittish basket cases, the redeemer of troubled scripts. From his lightning success as the ace mechanic of Neil Simon’s Broadway comedies “Barefoot in the Park,” “The Odd Couple” and “Plaza Suite” to more daring forays such as “Streamers,” “Hurly Burly” and “Death and the Maiden,” from his magicianship with the big-screen adaptation of Edward Albee’s “Who’s Afraid of Virginia Woolf?,” where he deployed his “silky soft” stratagems on Richard Burton and Elizabeth Taylor to ungirdle them out of their comfort zones, and the generation-defining “The Graduate,” which made an unlikely star out of adenoidal Dustin Hoffman, Nichols established himself as a craftsman and customizer delivering a high chrome polish.

He wasn’t a miracle worker, able to levitate the undead or alchemize a lump. A lumbering megasaurus like “Catch-22” seemed designed to hobble and humble a director whose best work was done in close quarters and in italics, not bold caps; what should have been a sporty farce, “The Fortune,” starring Jack Nicholson, Warren Beatty and the newcomer Stockard Channing, turned into an exhausting taffy pull; the yuppie redemption parable “Regarding Henry” was worked over by the critics as if it owed them back pay.

But just when Nichols appeared to have been delegated to the out pile, he would rock back with a hand grenade of sexual provocation such as “Carnal Knowledge,” a harrowing social message thriller like “Silkwood,” a burst of confetti like “The Birdcage” or, as an actor, unskin a tour de force portrait of slithery self-exoneration in “The Designated Mourner.” As his failures and duds fall by the wayside (though it’s often the biggest flopperoos that provide the book with the most memorable vignettes, e.g., the ongoing meltdown of Garry Shandling on “What Planet Are You From?”), the list of successes onstage and onscreen stretch from here to the horizon, capped by his HBO adaptation of Tony Kushner’s “Angels in America.” (Harris, be it noted, is Kushner’s husband.) Ironically, Nichols’s dexterity and cool engineering have worked against him in posterity as a ranking auteur, denying him the canonical status and mystique of other New Hollywood directors (Altman, De Palma, Scorsese, Coppola, Spielberg). The absence of gnawing compulsions, recurring themes, maestro flourishes and other distinguishing marks makes him difficult to place.

Placement, however, is for cultural historians, critics and committed kibitzers. For devourers of larger-than-life biography with a gala cast, “Mike Nichols” offers enough show business lore, celebrity tattle, hilarious wisecracks (when the playwright Ariel Dorfman solemnly informed Nichols that the author who influenced him most was Shakespeare, Nichols sighed, “Oh, Ariel, he’s awful”) and cameo appearances to stock a candy store to the rafters. Everybody who was anybody is here steaming up the glass. Comprehensive without being a chronological slog, a Wikipedia marathon, it’s the rare large-scale biography without boring bits because Nichols’s whirligig life was nearly devoid of boring bits and dead patches: busy, busy, busy up to the end (Harris notes that when Nichols died he “left behind an appointment book for the coming week that was completely full”).

Without indulging in judginess, “Mike Nichols: A Life” shows how Nichols’s project choices and social jockeying became winged together, presenting a portrait of the artist as a sybaritic grandee. It was the photographer Richard Avedon who tutored and groomed Nichols in the subtleties of hobnobbing with the Beautiful People, furnishing a tastefully deluxe lifestyle and reaching for the right fork, lest one be exposed as a rube. The student would eventually overtake the master until even Avedon found Nichols’s palatial style and host-with-the-most manner a bit much. Most notably, Nichols developed an expensive passion for owning and breeding Arabian horses — 40 in all, at one point — and set himself up as a country squire in Connecticut, playing host to illustrious houseguests such as Lillian Hellman; this required recurrent infusions of capital. I once asked a prominent film critic why Nichols had taken on a certain misbegotten project and she replied, “The horses needed hay.” But if the horses made him happy, who’s to begrudge? Movies aren’t everything.