“Eden of dangerous things,” the novelist Lauren Groff once described Florida. Zora Neale Hurston famously wrote of the “ground so rich that everything went wild” — not least the writers themselves. What other state so reliably produces such rowdy, uninhibited imaginations? Hurston, Kelly Link, Karen Russell, Alissa Nutting, Laura van den Berg, Jennine Capó Crucet. They have created a literature full of mirages and (actual) sinkholes, poised on the hazy borders between man and nature, ripeness and rot, tragedy and gag.

And life and death, in the case of Kristen Arnett’s “Mostly Dead Things,” an irresistible first novel set in the hard sunshine and “juicy green” of Central Florida, featuring a family of taxidermists, suicides and ruthless intimacies. A clan after Diane Arbus’s very heart.

“I must go home periodically to renew my sense of horror,” Carson McCullers once wrote. Jessa-Lynn Morton, Arnett’s narrator, never left. She never had that option. She was too much in love — never mind that it was with her brother’s wife; Jessa-Lynn was loved fiercely in return. Pretty, predatory Brynn was used to getting what she wanted, and what she wanted was both Morton siblings — together, they made the perfect spouse — until she wanted neither of them, and packed up for good.

That was the first defection. The second was gory. Jessa-Lynn’s father killed himself in his workshop, leaving his daughter to discover his body and inherit his failing taxidermy business. It’s here that the novel opens, in the months after the suicide. We meet Jessa-Lynn, shattered and up late, anesthetized on cheap beer, hands moving on autopilot as she restores the dignity to tattered pieces of roadkill.

Drunken taxidermy turns out to be a respectful route. Jessa-Lynn’s formerly mild mother, Libby, has forged her own inventive way to process her pain. She takes her husband’s meticulously preserved animals and forces them to strike some very curious poses in the front window of the shop. Badgers grope rabbits. A raccoon sports a satin negligee and demure bridal veil. Libby plans an exhibition of them that “highlights similarities between sex acts in the animal kingdom and those in modern suburbia,” she calmly explains to her horrified children. “Specifically correlations to myself and my late husband, Prentice.” 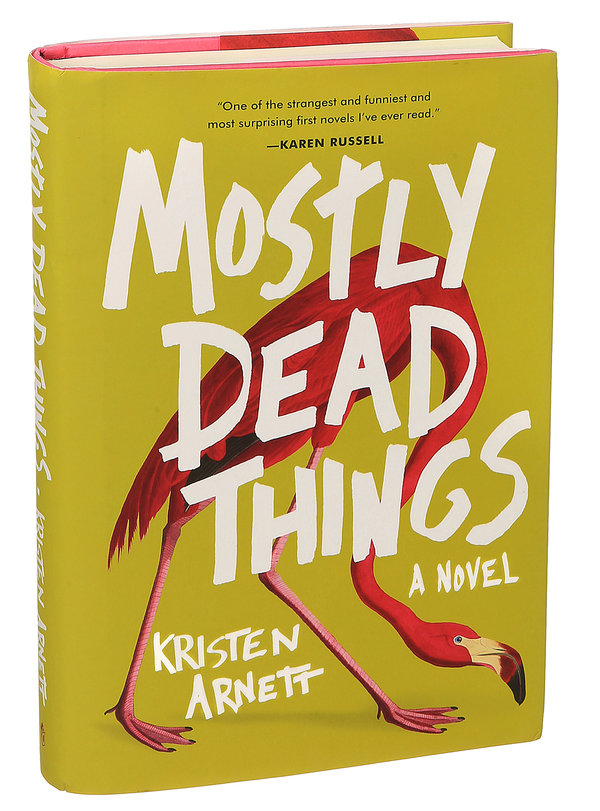 These are parched, grieving people, whose need is so enormous they cannot begin to discern what they might actually want; they make outlandish gestures or freeze into passivity. Jessa-Lynn is only really conscious for the first dread-filled seconds of each day, as she braces herself to register the impact of the oncoming hangover.

But Arnett possesses all the bravery her characters dream of. There’s none of the shyness and self-consciousness of so much American fiction that masks itself as austerity. She writes comic set pieces to make you laugh, sex scenes to turn you on. The action flips from the past to the present, swimming through first love and first grief on a slick of red Kool-Aid and vodka, suntan oil and fruity lip gloss, easy and unforced. This book is my song of the summer.

Corner me, though, and I’ll admit that it suffers slightly from some first-novel blues. The setup is expert, but the pace occasionally stutters. The climax feels rushed and muted, the resolution a little pat.

Not that it matters much; in fiction as much as taxidermy, it is the feeling of vigor and spirit that matters, that is proof of success. And the pulse in this book emanates not only from its sun-drunk, word-drunk wit, but from what it knows about life. Arnett’s characters suffer because they remember. Memories of happiness can be a kind of torture, and memory itself can feel seditious in a place so committed to forgetting. “It was what Central Floridians did: pave over everything so they could forget what had been there before,” Arnett writes. The land of the Seminoles was turned to carnival lots, supermarkets, strip malls. “No one ever seemed to remember what came before,” Jessa-Lynn marvels. “A kind of local amnesia.”

This is a novel that remembers in other ways, too — there are literary bloodlines to be traced. Young Jessa-Lynn standing rapt at her father’s side as he teaches her to skin a buck, her bonds with the men in her family, recalls Scout in “To Kill a Mockingbird.” In her youthful loneliness and self-sufficiency, she is a ghost of Bone from Dorothy Allison’s “Bastard Out of Carolina.” In her love for her brother and his wife, there is a feeling of Frankie from McCullers’s “The Member of the Wedding.” Later, when Jessa-Lynn develops a crush on an older, elegant woman, I sensed strains of Patricia Highsmith’s “The Price of Salt.”

Subtly, unmistakably a beautiful lineage is suggested in these echoes of the great heroines of American literature — so many tomboys, so many queer women. Their shadows flicker, trailing between the alligator jaws and deer hooves and peacock feathers in this book of inheritances, this cabinet of wonders.