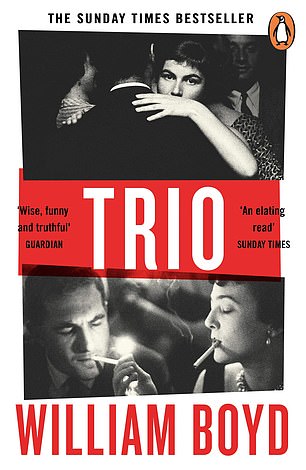 It’s 1968. America is bombing Vietnam, there is revolution on the streets of Paris and, in Brighton, gentlemanly film producer Talbot Wyse is presiding over the fractious shoot of a movie with the whimsical title of Emily Bracegirdle’s Extremely Useful Ladder To The Moon.

Like the other characters who make up the titular Trio of William Boyd’s 16th novel, Talbot has a secret which, if it came out, might allow him to be true to himself.

His leading lady, Anny Viklund, is carrying on an affair with her co-star while her current lover, a French philosopher, remains in Paris and her ex-husband is on the run from the FBI.

Meanwhile Elfrida Wing, a novelist unhappily married to the film’s director, is drowning the pain of her husband’s infidelity in vodka. Boyd’s bittersweet comedy asks searching questions about authenticity in life, love and art.

David Bailey’s mother, Glad, predicted that ‘You’ll end up like all of us, driving the 101 bus.’ The young Bailey was determined he would do no such thing. After National Service in Singapore, he landed a job with fashion photographer John French. Bailey’s subversive originality was perfectly in tune with the anarchic energy of the 1960s and he took some of the decade’s most iconic images.

He was equally at ease with the Kray brothers and legendary beauties such as Jean Shrimpton, Catherine Deneuve and Penelope Tree (he had affairs with many of his models and married several of them).

At 83, he shows no sign of mellowing: his outrageously entertaining memoir, written with James Fox, glitters with famous names from Mick Jagger to the Queen (even she didn’t escape the famous Bailey cheek: when he photographed her, he asked if her jewellery was real). 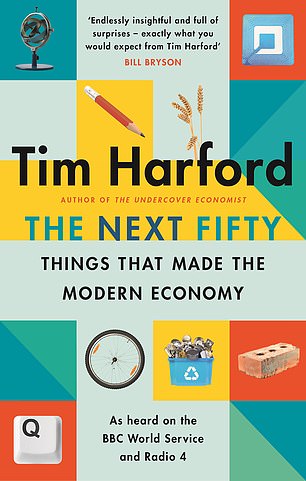 THE NEXT FIFTY THINGS THAT MADE THE MODERN ECONOMY by Tim Harford (Bridge Street £9.99, 352 pp)

THE NEXT FIFTY THINGS THAT MADE THE MODERN ECONOMY

Tim Harford is an economist and broadcaster with a gift for making his subject fascinating and comprehensible to non-economists. His previous book, Fifty Things, was a series of quirky essays on the radical social change brought about by such inventions as the wheel and the internet.

This sequel takes a close look at everyday inventions that we take for granted, but which, nevertheless, have a huge impact on our lives.

Harford considers culture-changers from bricks (used to build the tower of Babel), bicycles (and their role in empowering women), and spectacles (there is a global epidemic of short-sightedness among children and no one knows why).

Witty, informative and endlessly entertaining, this is popular economics at its most engaging.