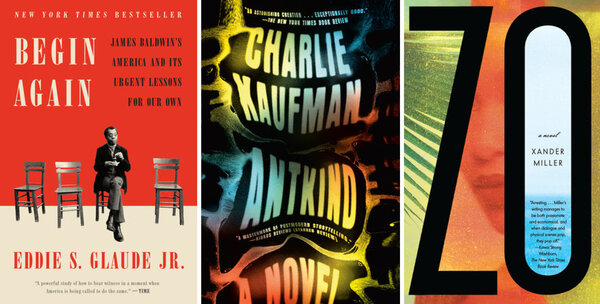 BEGIN AGAIN: James Baldwin’s America and Its Urgent Lessons for Our Own, by Eddie S. Glaude Jr. (Crown, 288 pp., $17.) Glaude, an African American studies professor at Princeton, didn’t believe white America would ever elect “such a person” as Trump president. “I was wrong, and given my lifelong reading of Baldwin, it was an egregious mistake.” In his latest book, the author of “Democracy in Black” searches Baldwin’s work for answers to “how an insidious view of race … continues to frustrate any effort to ‘achieve our country.’”

VESPER FLIGHTS, by Helen Macdonald. (Grove, 320 pp., $17.) Infused with autobiography, this essay collection by the British author of “H Is for Hawk” “celebrates her country’s wild bounty,” Joshua Hammer wrote in his review, “while exploring its fragility and its relationship to national identity.”

ANTKIND, by Charlie Kaufman. (Random House, 720 pp., $18.) This “riotously funny” debut novel by the Academy Award-winning screenwriter takes us inside an absurdly neurotic film critic’s hallucinogenic mind. Our reviewer, Matthew Specktor, called it “an exceptionally strange book” and “an exceptionally good one.”

ZO, by Xander Miller. (Vintage, 352 pp., $17.) The beating heart of this debut novel about love that’s “desperate to cross socioeconomic class” is its contemporary Haitian setting, our reviewer, Kawai Strong Washburn, observed, and “the stark demands of a life lived amid capricious, grinding poverty.” Washburn praised Miller’s language (“passionate and economical”) and his themes: “tenderness and heroism, the depths of loneliness and peaks of romance,” “the courage of an entire nation.”

LOOKING FOR MISS AMERICA: A Pageant’s 100-Year Quest to Define Womanhood, by Margot Mifflin. (Counterpoint, 320 pp., $17.95.) “Cleareyed about the pageant’s many hypocrisies and failures,” and at its best when profiling individuals — from Yolande Betbeze (1951), who refused to model swimsuits during her reign, to Vanessa Williams (1984), the event’s “own Hester Prynne,” who was its most successful winner — Mifflin’s “lively book,” our reviewer, Molly Fischer, concluded, “reads as an obituary.”