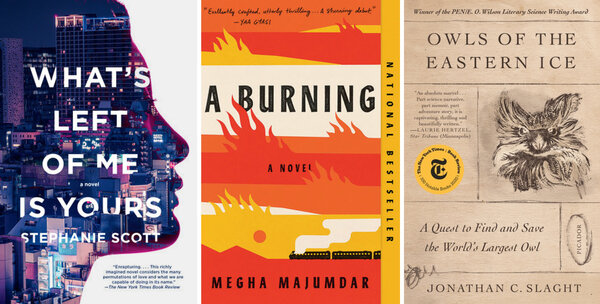 WHAT’S LEFT OF ME IS YOURS, by Stephanie Scott. (Anchor, 352 pp., $16.) “Each chapter of this enrapturing novel,” based on a 2010 Tokyo murder trial involving a “breaker-upper” hired by a husband to seduce his wife, is “elegantly brief and charged with barely contained emotion,” Tobias Grey wrote in his review. Yet Scott’s subject is “vast”: that the law doesn’t protect the innocent and “what matters most is knowledge — of ourselves and others.”

A BURNING, by Megha Majumdar. (Vintage, 304 pp., $16.) Set in today’s Kolkata, this “fierce and assured” debut novel, which opens with a passenger train’s torching, depicts what our reviewer, Susan Choi, described as “exponential change triggered mostly by chance.” The characters’ bonds are weak, but fate has rarely been “so muscular,” “so mesmerizing.”

OWLS OF THE EASTERN ICE: A Quest to Find and Save the World’s Largest Owl, by Jonathan C. Slaght. (Picador, 368 pp., $18.) Throughout his vivid account of a Russian Far East odyssey, Slaght, a wildlife biologist, keeps us “tucked close”; we are “plunged along with him,” as our reviewer, Tucker Malarkey, put it, into “long frozen nights, meals of moose meat and hard candy,” “catastrophic weather” and “a Zen-like state of noticing.”

NOTHING IS WRONG AND HERE IS WHY: Essays, by Alexandra Petri. (Norton, 272 pp., $15.95.) “Whether or not you’re familiar with Petri,” our reviewer, Tiffany D. Cross, said of the Washington Post columnist, “you will be pleasantly surprised by her expanding repertoire of droll mockery on our current state of affairs, bringing a much-needed perspective to the male-dominated genre of political satire.”

BILLION DOLLAR LOSER: The Epic Rise and Spectacular Fall of Adam Neumann and WeWork, by Reeves Wiedeman. (Back Bay, 304 pp., $17.99.) Our reviewer, Walter Kirn, declined to “give away the plot” of Wiedeman’s “indefatigable, scrupulous” portrait of “the dubious co-working-space company” and “the co-founder who eventually all but wrecked it” — which, “like the most engrossing nonfiction stories, has a plot indeed, one that only reality could contrive.”

WANDERING IN STRANGE LANDS: A Daughter of the Great Migration Reclaims Her Roots, by Morgan Jerkins. (Harper Perennial, 304 pp., $17.) Jerkins travels to the South to reconnect with her heritage, but, our reviewer, Afua Hirsch, noted, it is the African continent, “woven subtly throughout her prose,” that becomes her “unmistakable ancestral hinterland.”