BRAT: An ’80s Story, by Andrew McCarthy. (Grand Central, $28.) The actor and writer, who rose to fame with the so-called Brat Pack alongside Rob Lowe, Molly Ringwald and others in the 1980s, reflects thoughtfully on his New York-area childhood and early stardom.

MONKEY BOY, by Francisco Goldman. (Grove, $27.) This autobiographical novel features “Frank Goldberg,” a middle-aged writer visiting his Guatemalan mother in a Boston nursing home, where he recalls his tormented and abusive father, his estranged sister and his days as a bullied high school student.

POP SONG: Adventures in Art and Intimacy, by Larissa Pham. (Catapult, $26.) Pham’s debut book is a brave, shrewd work of artistic and cultural criticism, exploring the ways we filter raw love and heartbreak through our encounters with music, art and other experiences, for better and for worse.

EXCUSE ME WHILE I DISAPPEAR: Stories, by Joanna Scott. (Little, Brown, $27.) In her third collection, Scott (a prolific novelist) probes the creative drive. An artist’s apprentice tries to ensure he’ll live on; a scholar in the future studies writers who used paper, not screens.

JOURNEY TO THE EDGE OF REASON: The Life of Kurt Gödel, by Stephen Budiansky. (Norton, $30.) A biography of the revolutionary mathematician who, like his friend Albert Einstein, found refuge from Hitler in Princeton. 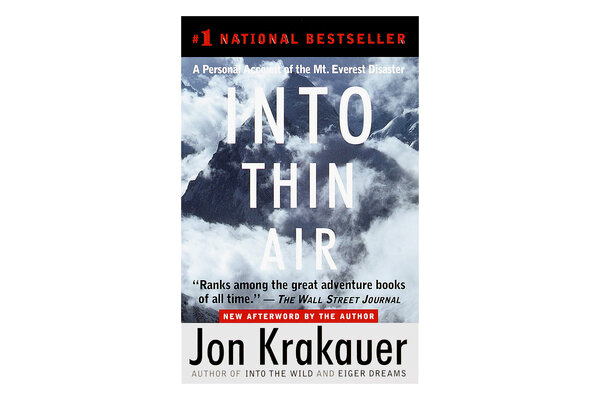 Maybe in a period so packed with extremes, I should seek comfort: a mystery, a comedy. Instead, the tumult of the past year has sent me headlong toward true stories of survival and disaster, tales of those who pushed beyond their limits and butted against the edge of what’s humanly possible — or gone over it.

Recently I’ve been rereading two of my favorite nonfiction adventures: “Into Thin Air” and “Into the Wild,” both by the journalist and mountaineer Jon Krakauer. INTO THIN AIR (1997) is his account of the 1996 Mount Everest disaster that left eight climbers dead and many others stranded. And while a harrowing story of people seeking glory is plenty engrossing, it’s Krakauer’s eye for detail that I find most gripping. The specifics will dash any vision that uninitiated readers might have of reaching the world’s highest peak — giving way to the disorientation and desperation of such a conquest, and the perseverance of human nature.