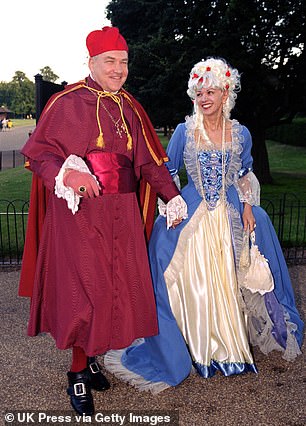 ‘Losing status, money, reputation and security is a shock when it happens all within a few days,’ writes Barbara Amiel in her fabulously gutsy and revealing memoir.

She takes us from her world of glittering wealth to the darkness of near-penury, when her husband, media tycoon Conrad Black, was jailed for fraud.

Loathe her for her self-pampering high-spending, or pity her for her plummeting descent, you’ll be swept along by the eye-popping details. One day, Ghislaine Maxwell said: ‘I’ll bet I’m in charge of more bathrooms and lavatories than you.’ They started totting them up — including those on planes and choppers. Ghislaine won. ‘The Palm Beach version of Monopoly, I suppose.’

Amiel reserves special poison for the ‘friends’ who deserted the couple (she lists them), and for their persecutors: ‘I have worked out 1,001 ways to see them die, beginning with injecting them with the Ebola virus and watching.’

Charlie Gilmour’s memoir of coming to terms with his traumatic past is centred round a squawking magpie chick he and his fiance adopt when it falls out of a tree.

The chaos and love that flows from this avian rescue forces Charlie (adopted son of Pink Floyd guitarist David Gilmour) to confront the chaos and lack of love from his own birth father, the poet Heathcote Williams, who left when he was a baby.

A brief reconciliation with his father followed by another abandonment sent Charlie into a tailspin of drug addiction at university; in 2011 he went to prison for swinging from the Union Flag on the Cenotaph. With frequent hilarious magpie interludes, this book takes us from that nadir to the joy of Charlie becoming a father himself. 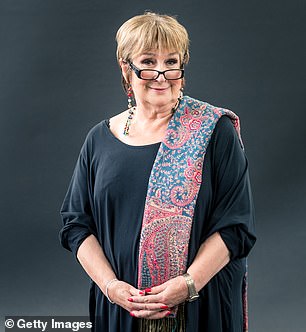 In a year when many of us have felt a tightening around the waistband, Jenni Murray’s memoir about her lifelong battle with her weight is timely.

The pounds piled on very gradually, until she found she was somehow weighing 24 st.

She blames her eating dysfunctionality partly on her mother, Win, who instilled in her the post-war habit of eating everything on her plate, as well as shame about being fat (‘You look like a baby elephant’).

During her career as Woman’s Hour presenter, she failed at every diet known to woman. At last, hardly able to walk, she got help from a professor of metabolic surgery, who gave her a sleeve gastrectomy in 2015. It changed her life. 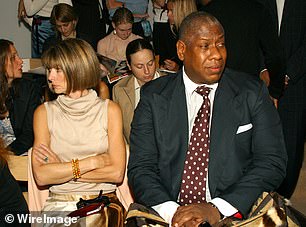 Style guru Andre Leon Talley went from slimline darling of the New York and Paris fashion worlds, dressed in snappy Bermuda shorts, aviator glasses, knee-high socks and penny loafers, to obese cast-off, rejected by his close friends, Chanel’s Karl Lagerfeld and U.S. Vogue editor Anna Wintour. Now needing to be pushed through airports in a wheelchair wearing one of his voluminous kaftans, Talley, in this enthralling if self-pitying memoir, exposes the world of fashion as he sees it: a war-zone of ‘air-kissing and back-stabbing’. 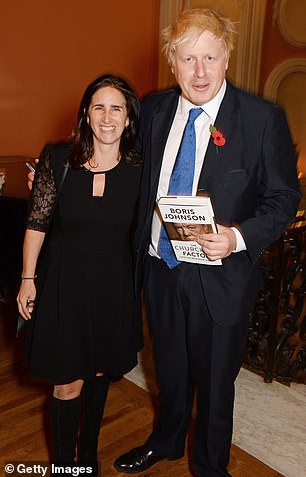 ‘A journey about what we have, what we lose and what we rebuild,’ writes Marina Wheeler QC, ex-wife of Boris Johnson, in her preface to this deeply touching book, which traces what happened to her mother’s Punjabi family before, throughout and after Partition in 1947, during which 10 million people were displaced and around 750,000 were killed.

Marina’s mother had a miserable arranged marriage aged 17 from which she escaped, and later met and fell in love with the BBC foreign correspondent Charles Wheeler.

Between the lines, we glean clues about how Marina herself is rebuilding her life after Boris (whom she doesn’t mention) — she seems to be doing just fine. She also lets on that as a teenager she was suspended from school for breaking most of the rules. 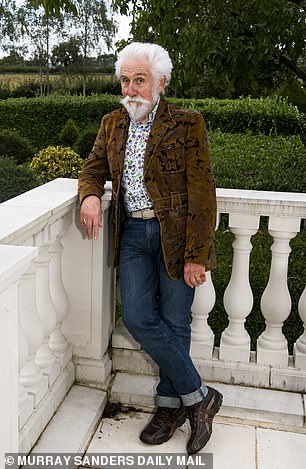 The latest wonderfully gossipy diaries of Sir Roy Strong are a litany of the pleasures enjoyed by the great and the good in pre-Covid times: opera, galleries, parties, memorial services attended by hundreds, staying with friends in their grand houses, going on art tours to Italy.

Strong’s aesthetic fastidiousness is delicious, and it’s here in abundance. The Queen wears ‘a horrendous brilliant turquoise outfit’, while writer Lucinda Lambton is dressed in ‘an assortment of old rags’. Fire doors are ‘the death of architecture and atmosphere’.

Grieving for his wife Julia, Strong is nonetheless determined to keep active and optimistic. He even has a personal trainer, who is impressed by his ability to do multiple press-ups in his late 70s. 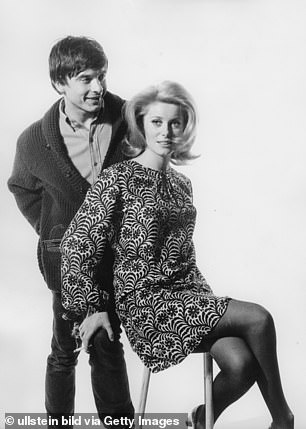 David Bailey has been trading on his East End persona for 60 years, his Cockney charm an aphrodisiac to the well-brought-up 1960s models whom he photographed, slept with and sometimes briefly married.

Severely dyslexic — he could hardly spell his own name at school — he tells his life story (four marriages in total) to his ghost writer James Fox, who catches every F-word.

Growing up among bombsites, knocked out cold by the Krays’ rivals the Barking Boys, and then the darling of Vogue fashion photography in the 1960s, Bailey treats us to a feast of swinging London.

With patients ranging from Paul McCartney’s dalmatian to Margaret, Duchess of Argyll’s poodle Antoine, who was ‘having bad dreams’, Bruce Fogle (father of adventurer Ben) started out as a vet to the well-heeled of Knightsbridge in the early 1970s — the days when Harrods’ pet department still sold pumas, alligators and skunks as well as puppies.

His ‘how to’ books on pet-care sold in their millions, but this is a more personal account of veterinary care in the days of long lapels, from the exhilaration of saving an animal’s life to ‘the searing intensity of loss’.

His boss’s rule was ‘never socialise with clients’. Fogle broke it when the actress Julia Foster brought in her golden retriever Honey. Fogle went to watch Foster at the Royal Court, and love blossomed at the stage door.

TOMORROW WILL BE A GOOD DAY 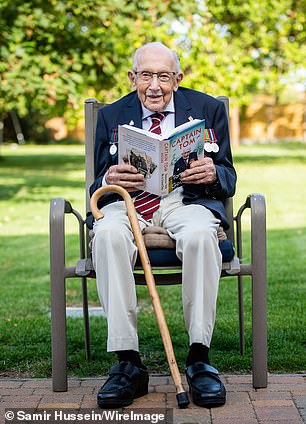 ‘Keep going, Granddad!’ said his grandson, Benjie, when Captain Tom, clutching his Zimmer frame, embarked on 100 laps of his garden in the run-up to his 100th birthday in April. Aiming to raise £1,000 for charity, in the end he hit £39 million, such was the warm response.

In this delightful memoir, we see the build-up to that ‘I said I’ll do it and I will’ attitude.

Honing his rough-terrain skills on his motorbike in the Yorkshire hills as a teenager, he rode off to an Army training camp in 1940, becoming Brigade Motorcycle Trainer in the Indian Jungle.

After the war, he persevered in a miserable marriage for 15 years. Only when his wife started an affair with her psychiatrist did he call it a day, and then had a much happier second marriage.

‘My today was all right and my tomorrow will certainly be better. That’s the way I’ve always looked at life,’ he writes. 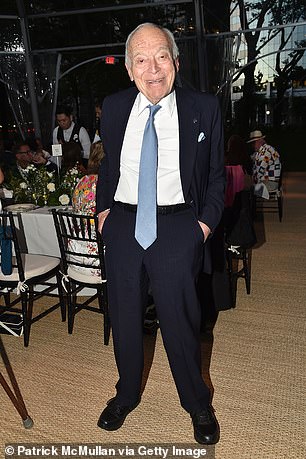 THE COMPANY I KEEP: MY LIFE IN BEAUTY by Leonard Lauder (Harper £25)

THE COMPANY I KEEP: MY LIFE IN BEAUTY

Reading this fizzing memoir will fill you with 1960s New York energy, as well as showing you just what it takes to build up and sustain a global family business.

Leonard Lauder tells his story with deeply civilised charm, starting with his immigrant mother Josephine Lauter, who came up with the exotic name Estee Lauder (softening that Germanic ‘t’) to sell her cosmetic products. Her mantra was: ‘There are three ways to get known: telephone, telegraph, and Tell-a-Woman.’

What a powerhouse of enterprise she was, refusing to take no for an answer as she got her toe through the door of Saks Fifth Avenue: young Leonard learned everything from her, and honed the leadership skills he’d picked up in the U.S. Navy when he became CEO.

The book evolves into a bit of a thriller as he recounts the savage ‘Revlon Wars’ followed by the ‘Lancome Wars’: it’s no laughing matter fending off rivals who are out to sink you.

CLOTHES… AND OTHER THINGS THAT MATTER 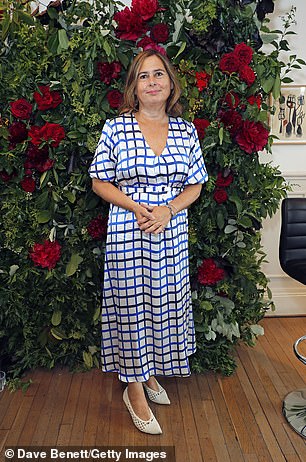 CLOTHES… AND OTHER THINGS THAT MATTER by Alexandra Shulman (Cassell £16.99)

Following on from her acclaimed diary, Inside Vogue, ex-editor-in-chief Alexandra Shulman treats us to a more intimate glimpse of her life through the prism of her own wardrobe.

Opening with an inventory — it contains 556 pieces, including 22 coats, 35 dresses, 24 pairs of flat shoes, 34 pairs of heeled shoes, 35 bras, and 37 handbags — this compact book consists of 38 short chapters, each a meditation on an item in that list and how we express ourselves in what we wear.

Honest about the exhilaration of her career in fashion and the anxieties that have dogged her since her teens, she tells a fascinating story of her life from little girl in itchy navy blue, to teenager in bikini, to sharp-suited working mother, to her current existence which seems to be nicely dressing-gown-filled.

Save at least 10 per cent on all books reviewed on these pages. Visit mailshop.co.uk/christmasreviews or call 020 3308 9193