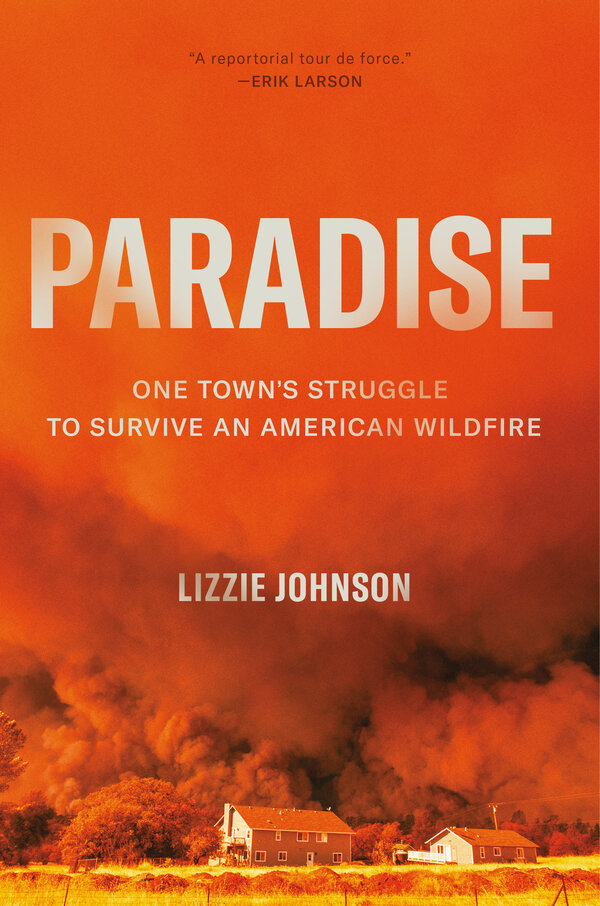 Images of the wildfire that devastated Paradise, Calif., in 2018 are hard to forget. Known as the Camp Fire — after Camp Creek Road, where it started — the disaster killed at least 85 people and essentially destroyed the entire town. Lizzie Johnson was a reporter at The San Francisco Chronicle at the time, and her new book, “Paradise,” is a vivid ticktock account of the disaster, told through the stories of those who experienced it. Johnson, now a reporter at The Washington Post, talks about the fire as a turning point, how the scope and structure of her book changed over time and more.

When did you first get the idea to write this book?

The book came about a lot earlier than the Camp Fire itself. I’d been writing about wildfires for a while, and there wasn’t much being written about the longer-term effect of them — how people tried to rebuild their lives and their sense of community, and about what these fires were doing to the landscape and our collective sense of safety in California. It seemed like every year the state got a little itchier. When the Camp Fire happened, it became clear that it was a big turning point for the state, and I knew that’s what the book would be about, and that I would weave in the other fires I’ve covered.

There’s no way I could get all of this into a newspaper. Everything was so chaotic, and it was really hard to understand what had happened, and there was that grasping for months and even years after, wondering how this fire started and what it did to this town.

What’s the most surprising thing you learned while writing it?

I’m really obsessive about my reporting, and for whatever reason I was trying to learn more about the Oroville Dam. One of the big natural near-disasters that happened in California was in 2017, when they got way too much rain and the dam, which is the tallest in the country, almost split. When they built it, they’d imported all these stones from all around the world, and there are stones from the Taj Mahal in the dam, which is wild. I couldn’t fit that fact in the book, because it didn’t flow into the narrative. But I thought that was cool.

Also, you always think firefighters are these very stoic, brave people, and just realizing how scared they are with these fires is really eye-opening in terms of how bad the fires are and how much worse they’ll get. These are the people we expect to save us, and at a certain point they can’t.

I feel like I wrote three different versions of this book — the bad version, the slightly better version and the version that came out. The difference in making a structure that made sense was organizing it around the five stages of a wildfire: kindling, spark, conflagration, containment, ash.

You can’t cover every single part of it, and in the beginning that’s what I was trying to do. It was this monster of a thing, always growing new tentacles. I remember turning in the first part of the book to my editor, and she said it was looking great. It was focused on Paradise. And then I got lost in the forest and rewrote the entire first part, and she just sent me an email: “Hey, can you give me a call?” It became this huge mess, because I was trying to do way too much.

By organizing it around those five parts, I was able to make it into something more readable. The book I set out to write was truly all-encompassing, and at a certain point I realized I had to center it around the town of Paradise.

What creative person (not a writer) has influenced you and your work?

During the pandemic I got really interested in pottery and ceramics, as a tactile way of creating something in the midst of creating something that felt very abstract at times. Writing a book feels like it’s coming out of thin air. There are a few ceramists I really admire — Jennifer King of Jen King Studio, Beth Katz of Mt. Washington Pottery, Kimmy Rohrs of Whiskey & Clay, Fernando Aciar of Fefo Studio. To make something beautiful like that takes a certain structural integrity that you also see in writing. It has to be able to hold up and look effortless. Looking at their ceramics made me realize how hard it is to create something beautiful and balanced in your hands that won’t explode in the kiln.

One bowl can look 10,000 different ways. I spent a lot of time looking at picture of bowls and plates, and watching videos of how ceramists made their wares. My poor friends, they all have a ton of tiny, misshapen bowls.

Persuade someone to read “Paradise” in 50 words or fewer.

Climate change isn’t this thing on the horizon that we’ll face in 10 years — we are living with it now. Paradise is a stark example of what we stand to lose. We need to heed its warning, because it won’t be the last place destroyed by disaster.