The Adelaide poet, short-story writer, librettist and novelist – and GP – is one of the most respected writers in the country. His fiction is diverse in its subjects, and is underscored by a sense of irony and wit. But if he’s not obsessed with what he’s writing, he knows it won’t work. 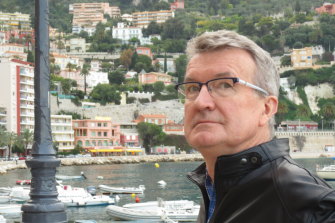 Peter Goldsworthy says it’s hard to let a book go out into the world.Credit:

We are talking about Minotaur, his ninth novel, which took a while to really grab him.

‘‘It happened three or four years ago. I had a spell away and then came back to it and it really came alive. You have to be obsessed enough to want to get up and get at it, and you also have to hate it because of the daily and weekly despairs or disappointments. If you don’t love it that much, you’re not going to hate it that much.’’

Minotaur is described as a crime novel, and it has that narrative propulsion. Detective Sergeant Rick Zadow is coming to terms with blindness after being shot in the head. His wife, whom he adores, has abandoned him, he’s having trouble with the people who provide his guide dog, he is obliged to see two psychiatrists, he is unable to finish restoring his beloved vintage Ducati, and to make matters worse the crim who shot him has absconded from jail. 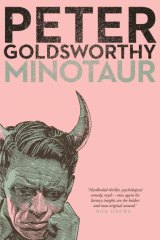 Zadow reckons he’s coming after him, so despite his blindness he decides to set himself up as bait in a trap so he can sort the whole business out once and for all.

‘‘I love crime novels,’’ Goldsworthy says. ‘‘I wanted to take some of the tropes and I also wanted to write about revenge. I love writing about mythic ideas that go way, way back and fuel all our stories and then give them another run round the contemporary world.

‘‘Revenge, I’ve always been interested in – the urge to revenge which we conquer and sublimate through the law courts now that we aren’t hunter gatherers any more.’’

But for all the seriousness, it comes as no surprise that Goldsworthy runs a comic riff through the novel, even in its most dramatic moments. There is Rick’s relationship with his dog, and more obviously the dialogue between Rick and Siri, the voice that steers him through the streets of Adelaide and provided Goldsworthy with much amusement: ‘‘Can I have a root, Siri?’’ ‘‘A route from current location to where?’’ Goldsworthy says much of the talk between the two he didn’t invent.

At the heart of Rick’s predicament is his blindness. Goldsworthy has a blind friend who shared much of his experience and he also has a few blind patients. What none of them have is blindsight, which Rick does. This is when blind people can unconsciously react to things they cannot consciously see.

‘‘That just extends the blindness metaphor,’’ Goldsworthy says. ‘‘It is a really useful metaphor for what’s happening to him through the book.’’

He worked on the book for nearly eight years, although that was interrupted by writing short stories and the libretto for Ned Kelly, the opera that had its premiere at this year’s Perth Festival. But immersing himself in the Kelly story gave him plenty of ideas about crime and revenge.

Goldsworthy is very talkative today – he does, after all, have a new book out – but partly as a consequence of the drugs he is taking for multiple myeloma, ‘‘like leukaemia, but it’s not the white cells it attacks but the plasma cells’’. He has had a stem-cell transplant and did the final edits for Minotaur while he was in Royal Adelaide Hospital. ‘‘A jaundiced eye makes for a stern edit,’’ he says.

The problem about being obsessed with a book you’re writing, it seems, is judging the time when you have to let it go out into the world. ‘‘It’s like letting a child go and be itself.’’

It will be a while now before Goldsworthy reads Minotaur again. If you do, he says, you’re bound to see things immediately that you regret.

‘‘I went back and read my last novel, Everything I Knew, which was 10 years ago. I have had stories out since and a memoir, but somehow in my mind I had decided that wasn’t one of my best novels. Maybe because nothing had happened – no stage adaptation unlike the others, the film people didn’t want it. I read it again and went ‘hang on, this is really good’. It was like reading it for the first time.’’

He needn’t be afraid of reading Minotaur again.