FLIGHT OF THE DIAMOND SMUGGLERS
A Tale of Pigeons, Obsession, and Greed Along Coastal South Africa
By Matthew Gavin Frank

Diamond mining isn’t the only business built on a lie, though the industry’s central myth — that diamonds are scarce and therefore extremely valuable — has to be among the most brazen.

The cartels that mine South Africa, which for generations provided the lion’s share of the world’s diamond supply, perpetuated this inconceivably lucrative fiction by carefully limiting annual production, which is why smuggling was considered such a threat. Black-market diamonds — mostly smuggled out by the impoverished miners themselves — threatened the illusion of scarcity, and so mining concerns long ago became exercises in total control.

Until the area began to open up in 2007, a huge portion of South Africa’s west coast was a virtual no-go zone called Die Sperrgebiet (“the Forbidden Zone”) that remained closed to the public for nearly 80 years. Miners lived in company houses, sent their kids to company schools and played cricket on company fields. They never needed to leave and historically were forbidden to do so. At the mines themselves, there are X-ray machines, constant pat-downs and random application of powerful laxatives to discourage those who would swallow contraband. Possession of a diamond in a mining town is cause for arrest, and touching a diamond with your bare skin is not allowed even inside the mines. Miners who die on the job are buried on site, lest their bodies be stuffed with diamonds on the way out. Everything in the mine, the mining town and the mining region is designed to make it as difficult as possible to get the tiny unpolished stones out of the company’s control.

That’s where the birds come in, as the essayist Matthew Gavin Frank explains in “Flight of the Diamond Smugglers,” his rumination on brutality and resistance in the mines of South Africa. Homing pigeons, hidden inside miners’ lunchboxes or tucked under clothes, have been used for decades to illicitly spirit gems away from the mines. Smugglers fit their birds with tiny diamond-filled parcels, usually one on each leg and under each wing, and release them from the mine’s vast pits in the hopes they will deliver the booty back to their homes undetected. The practice has become so common that pigeons have been outlawed in mining towns and are killed on sight by shotgun-toting security guards. Frank describes disturbing scenes of overloaded pigeons landing on beaches, too exhausted to make it home, only to be set upon by villagers who know all too well what payload they are carrying. 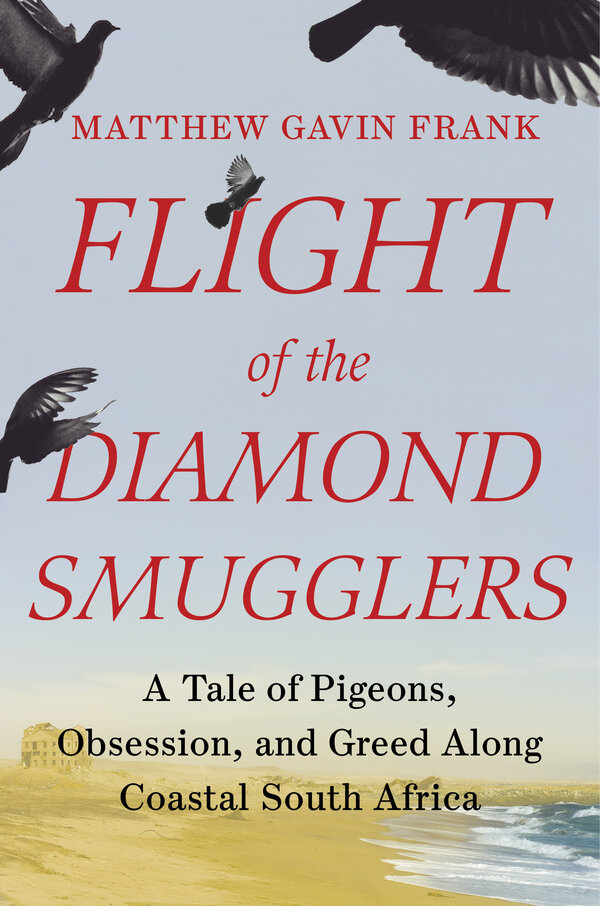 It’s only the most recent in a long list of indignities visited upon the pigeon during a partnership with humans that spans millenniums. Relied on for food, fertilizer and, of course, delivering messages in both wartime and peacetime, no other animal aside from the dog has been as useful to humans, and few have been as thoroughly studied. We still don’t know exactly how pigeons find their homes even when released hundreds of miles away, but we do know they are among the smartest of animals, capable, for example, of distinguishing all 26 letters of the alphabet and passing the “mirror test” by recognizing their own reflections — something very few animals can do. And their stamina is legendary; they have been known to fly up to 800 miles in a single day at speeds of over 60 miles per hour. If you get nothing else from this book, you will realize what a truly astonishing creature you are shooing out of your way on the sidewalk or cursing for crapping all over your car.

In recent years, companies have begun pulling back from South Africa’s coast, an area now considered “overmined,” and turning their company towns over to locally elected councils. Frank and his wife, who is from South Africa, managed to finagle their way into an area that hosted the original DeBeers mines, the enormous pits that made the company among the world’s wealthiest. What Frank finds is a lesson in what happens to a company town when the company pulls up stakes. Eerie scenes of depopulated and denuded landscapes and empty highways are made spookier by tales miners share of what happens when smugglers get caught. Confirmed (or even suspected) offenses have historically been dealt with extrajudicially — usually with a broken finger or a gouged eye or even a bullet through the head. It’s a reign of terror lately overseen, Frank learns, by the larger-than-life “Mr. Lester,” the DeBeers security chief whose very name invokes averted eyes among the locals, who seem to regard him as something akin to a boogeyman.

“Flight of the Diamond Smugglers” has some affecting scenes and some wonderful turns of phrase. In a cafe in a near-abandoned company town, Frank spots some old trophies on the wall, “testaments to the golf contests that were once held here, when there were still things here that could be won.” But there are also some wrong turns, phrasing-wise, in some cases so many in one sentence that readers could be forgiven for just giving up and moving on. Here is the author on some fogbound miners spotted on the side of the highway: “The soil of their hearts feels alluvial, rife with stones both precious and feral, the metastable carbon allotropes (now responsible for their livings and their crumbling towns) having eons ago exploded from the center of the earth through kimberlitic pipes” and so on. That’s a steeper mountain than the average reader will be willing to climb, not to mention a lot of insight to glean about the miners’ interior lives without actually talking to them. In another such town, he spots two women chatting at a store counter. To the best of my knowledge, the women of South Africa chat much as they do anyplace else, but to Frank they “appear to be dancing with the cashier’s counter between them, as if bound, forever sepia and strobe-lit, to some epileptic phenakistoscope.” Frank seems to enjoy the people with whom he actually does talk, but you have to wonder if it occurred to him how few of them, given the opportunity, would ever reach the end of a book like this one.

Whether or not you enjoy this kind of prose is a matter of personal taste, but the author’s talent is not in question. Frank gets great quotes from the characters he interviews, and the book’s structure — searching for the mysterious Mr. Lester — keeps the story moving and offers a payoff in the end that is disappointing, but in all the best ways. The material in general — ghost towns, corporate cruelty, the centuries-old relationship between humans and a species almost magical in its abilities — is fabulous.

The problem is that there is not enough of it. Somewhere in this manuscript is an outstanding New Yorker-style piece of perhaps 10,000 words on pigeons and diamond mining, but successfully extending that to book length would have required more reporting than we get here. What we do get is not really reportage, in any case. Frank seems to know this; a running joke throughout the book is his failure to show up to interviews with an actual notebook and being forced instead to scribble on receipts or whatever else is at hand. Nor does the material really work as a book-length essay along the lines of Helen Macdonald’s “H Is for Hawk”; themes hinted at early on — including the author’s grief over his wife’s lost pregnancy — are never fully developed. I would call this travel writing, which is nothing to be ashamed of for a writer with literary aspirations — we have all read travel writers so literate that their work transcends the genre. But we have all eaten thin soup, too, and know that nothing can really save it — not even page after page filled with allotropes and phenakistoscopes.