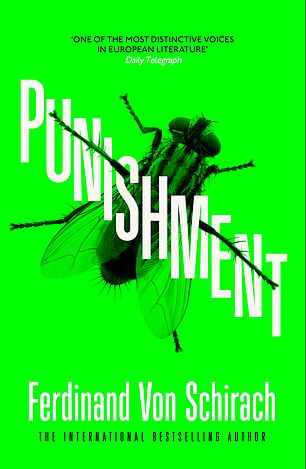 The cool, crisp narrator of these 12 bleak tales casts a world-weary eye over brutal crimes, neighbourly conflicts and unexpected comeuppances.

Translated with economical elegance by Hall (who had to master the complexities of the German judicial system and the handling and dismantling of a gun for this collection), and informed by insider knowledge — von Schirach was a defence lawyer for 20 years — it’s a chilling insight into a flawed justice system, the people who work in it and the guilty and guileless who find themselves judged.

Here, there’s a short, silly assistant supermarket manager who steals an underworld drug stash (The Small Man); an ambitious young woman who finds herself morally compromised when she provides legal counsel for a violent, merciless sex trafficker (Subbotnik); and a mother who takes revenge on her hated husband (A Light Blue Day).

The Six Who Came To Dinner

There’s an accomplished liar who knows ‘you have to be within touching distance of the truth’ to be believable (Empty Nest); a cosy dinner party, in the titular story, that becomes wincingly uncomfortable as the host provokes soul-searching in her guests; while the narrator of The Weekend In Question finds a body and discovers the wealthy people she cleans for are as ‘full of ambivalence and good intentions’ as she is.

Anna Vaught stories are decidedly, delightfully odd. Subtitled A Series Of Reflections On Age, Sex, Death And Judgement, these teasing little vignettes venture towards the witchy and the weird, relish the lusciousness of outré language and take place in funeral parlours, embalming suites and strange houses which are home to mysterious people with second sight and unaccountable urges.

There’s the morbidly funny My Dead Dears And I, where smitten undertaker Evans the Bodies and grieving Muffled Myfanwy embark on a ‘strange courtship’ as they prepare Jones the Angry — ‘a mean old man … hurt by the world’ for his burial; It Is Not Age That Withers Her is a supernatural, slantwise take on Great Expectations, set on an estuary in Wales; while the vituperative An Angry Starlet Retires To The Shenandoah spits with vim, vigour and the bad intentions of the spurned.