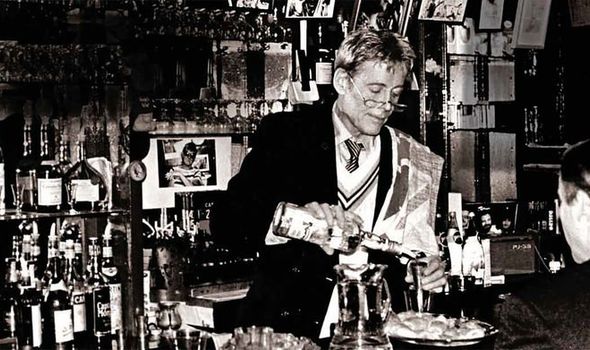 A tiny green oasis hidden from the real world, the Colony Room Club functioned both as a drinking den and a cultural barometer. Like a small living room with a bar at one end, it was packed with actors, artists, and misfits like me. Muriel’s, as it was affectionately known, was dominated by two personalities ‑ that of its owner Muriel Belcher, who opened the club in 1948, and the artist Francis Bacon, her most devoted customer.

She referred to Bacon as “Daughter” and he called her “Mother”, so close was their relationship.

In its 60-year history, more romances, deaths and sex scandals took place in the Colony than anywhere else. If they didn’t happen there, they were planned on the premises.

Walking in through the dark anonymous doorway off the street in London’s Soho and climbing the rickety staircase felt like a clandestine act.

The drinking laws were different then; you could not consume alcohol in a pub from 3pm to 6pm, only in a private members’ club.

The original attraction of the Colony was that when the pubs shut, Muriel opened.

Everyone who frequented the Colony Room Club can remember the first time they went there.

Like stumbling upon a murder scene, the club left its mark on anyone who entered.

I arrived there in 1988 with my former sparring partner, the artist Joshua Compston.

It seemed an unusual place to frequent as I was an art student at the time and there was hardly anyone under the age of 30.

Fortunately for me, Muriel’s former barman and successor, Ian Board, took me under his wing.

He would often ask at the end of the evening, “How’s your handbag, dear?”, meaning, are you going to be okay getting home or do you need money for a taxi?

He knew the perils and pitfalls of being a young artist, and could recall just how difficult money was to come by for Francis Bacon, Lucian Freud and countless others he’d known over the years.

Unlike Bacon, many other talented people squandered their artistic wealth in Soho. Long before the advent of mobile phones the club formed part of Soho’s “Bermuda Triangle”: The French (House), The Coach & Horses and the Colony Room Club – a diabolical trinity where loved ones could enter, dissipate and not be heard of again for what seemed an eternity.

Soho, as a beacon of counterculture, attracted the talented like moths to a flame. Many members shone brightly and faded out too young, like Joshua, who died at 25.

The club was like a psychological pressure cooker; all aspects of life were condensed in that tiny room which produced a learning curve so steep that many crashed and burned. Running a successful private drinking club was a real balancing act.

You had to be tough enough to win the gangsters’ respect so they would leave you to prosper, urbane enough to collect aristocratic clients, worldly enough to hold court over hardened businessmen and tolerant enough to empathise with all the strange flotsam and jetsam inevitable in Soho.

On top of all this you also needed a good barman who would not allow himself ‑ or the customers ‑ to rob you blind. Little wonder Muriel was crowned The Queen of Soho.

The Colony Room thrived on frisson and Francis Bacon rarely disappointed. He was very fashion-conscious and always immaculately dressed.

One afternoon he stormed in, clearly annoyed. “What’s wrong Francis?” someone asked.

“Bloody Harrods, I’m never going back there again.” He’d attended a special night for select clients and bought a lot of clothes, but when he got home, he’d decided he didn’t like any of them.

“I bought so many suits and shirts and threw the whole lot in the dustbin.”

Within seconds, the entire club had emptied and the next day everyone was back, parading around in the new clothes they’d salvaged from Bacon’s dustbin.

Artists, actors, authors and poets found Muriel a witty and generous, if foul-mouthed, mother figure who once quipped of club member Peter O’Toole: “If she was any prettier they’d have to call her Florence of Arabia.” Alcoholics can never remember people’s names so Muriel gave them nicknames that would stick in her memory.

It was possible to drink there for years and be unaware of the real names and professions of members ‑ they were characters of club folklore, such as “Stuttering Sara”, “Miss Hitler”, “Brian the Burglar” and “Twiggy”‑ an international businessman of huge girth.

According to Barry Humphries, the secret of Muriel’s success was that the Colony Room was “the alcoholics’ paradise. You merely ran up a slate. Later, much later, came the reckoning”.

I recall bizarre afternoons spent chatting to Myra Hindley’s psychiatrist, or karate play-fighting with the actor Burt Kwouk (Cato in the Pink Panther films). There were also disappointing occasions when you’d encounter someone who was legendarily famous.

“Miss Whiplash” was once pulled on to the lap of a very drunk old man, who fondled her and turned out to be film star Trevor Howard. After which she was never able to enjoy his film Brief Encounter again.

Doctor Who, AKA actor Tom Baker, would materialise after lunch and prop up the bar wearing his trademark hat and long scarf. He drank large gin and tonics with lots of ice from a pint jug. Everybody knew Tom. At 5.30pm on a Saturday they’d say: “Put the telly on, Tom’s on.”

And Tom would declare: “Look Francis, that’s me on television.” Francis would reply, “Oh, is it, dear? Another bottle of champagne please.”

At the time the legendary journalist and alcoholic Jeffrey Bernard was in hospital for necking too much Sally Smirnoff. As Jeff was telling Tom he had to change his lifestyle or die, the hospital DJ came round and enquired: “Is there a song you’d like to request for your friend?” “Yes” beamed Tom, “Can you play him, I’ll Be Seeing You (In All The Old Familiar Places)?”

There was often a queue for the club’s only loo. Francis Bacon, drunk and bursting to pee, arrived to be told: “There’s a woman inside.” He began yelling: “Come out of there,” and violently kicked the door which unbolted and a beautiful woman emerged, head held high. It was Christine Keeler. As she strode back to the bar, she spat out the word: “Men!” with all the contempt she could muster.

The biggest crime in the Colony was to be a bore and Muriel’s barman Ian Board would often complain of the actors: “They’re never offstage, that lot, are they? Look at John Hurt, that twit?” One night Hurt bored Ian so much that he exploded: “Francis Bacon told me you’re the most boring person in the world!”

John replied: “Oh no, Francis wouldn’t say that about me!”

“Go and ask him,” Ian shot back. Bacon turned round: “No, I didn’t say that… what I did say is you’re the MEANEST because you never buy a drink.”

Muriel didn’t mind people being at each other’s throats as long as they didn’t spill their drinks on her carpet. It was so tacky that if you stayed in the same position too long, your feet stuck to it.

The Colony once received a letter from Westminster Council branding it a health hazard because it possessed the most disgusting carpet their health inspector had ever seen in. Reluctantly, they replaced it with a new one so when you walked in, you were startled by a flash of bright green.

When Bacon arrived he was horrified. He immediately ordered a dozen bottles of champagne and sprayed them all over the new carpet. “That’s better,” he sighed.

We loved a sing-song around the piano, which was drenched in alcohol and hadn’t seen a tuner since 1948. “It was like dental work. If you lose a few teeth, you learn to get on without them,” remarked the pianist, Kenny Clayton.

One night a funny loud-mouthed northern girl in bovver boots and a beret turned up.

When I heard her sing, I thought: “If you went professional, you’d make a fortune.” A few weeks later watching Top Of The Pops, Lisa Stansfield was number one. I thought, “Jesus ‑ it’s that girl with the beret!”

An annual holiday to Kenya was a necessary relief for Muriel and Ian from the stresses of clubland. One year, they spotted the comedian Ronnie Corbett and his wife on the other side of the hotel dining room.

They had many mutual friends in common such as Danny La Rue and became inseparable until the fateful evening they dined in the grill-room as the temperature rose.

Everyone was ordering flambé bananas. Muriel was trying to cool herself with the menu, but when the young couple on the next table ordered the flaming bananas too, she cried out: “I hope they bleedin’ choke you.”

“If you are going to behave like that,” raged Ronnie. “I must leave.”

And he stomped off to settle the bill. Upon his return, met by the sight of the two tables united in laughter, his rage ran out of steam and he rejoined them.

The Colony Room has been converted into an apartment and its characters supplanted by a social media-obsessed generation who’d rather message a stranger on the other side of the world than converse with the person standing next to them at the bar.

Our Bohemia was a borderless country where big hopes were often matched by short purses. The inhabitants had untidy lives and even untidier deaths. Fortunately Bacon, Belcher and Board became Soho legends. Such is the legacy of the Colony Room.

Tales From The Colony Room: Soho’s Lost Bohemia by Darren Coffield (Unbound, £12.99) is out now