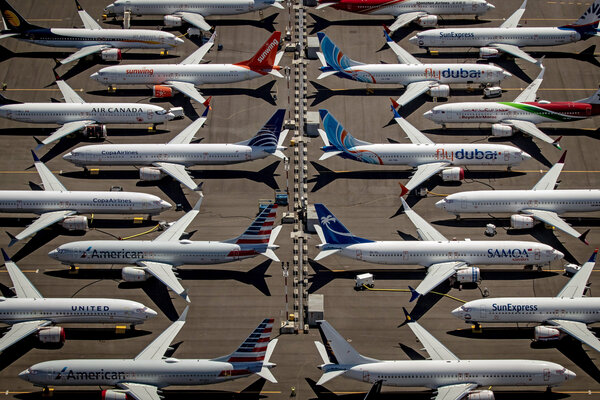 In October, a federal grand jury indicted a former Boeing test pilot named Mark Forkner, accusing him of deceiving the Federal Aviation Administration and scheming to defraud airlines during the development of the 737 Max, two of which crashed within five months of each other, killing 346 people.

It might be tempting to view the indictment as a sort of resolution to the 737 Max ordeal. Identifying a chief villain has a way of simplifying complex narratives and here, at last, was someone to blame. But while Forkner does appear to have hoodwinked regulators and misled customers, he was hardly the one most responsible for the two 737 Max crashes, which occurred in 2018 and 2019.

As Peter Robison demonstrates in “Flying Blind: The 737 Max Tragedy and the Fall of Boeing,” ultimate blame for the crashes lies with the highly paid executives who waged a decades-long campaign to transform Boeing from a company “once ruled by engineers who thumbed their noses at Wall Street” into “one of the most shareholder-friendly creatures of the market,” a company that “celebrated managers for cost cutting, co-opted regulators with heaps of money and pressured suppliers with Walmart-style tactics.”

Robison, an investigative reporter at Bloomberg, wrote about Boeing only occasionally in the wake of the second crash. That has not left him at any disadvantage. Through archival research, the benefit of the extensive reporting on the crashes and their aftermath, and interviews with many of the key players, Robison has produced an authoritative, gripping and finely detailed narrative that charts the decline of one of the great American companies.

Boeing’s importance to the country’s economic and industrial story is hard to overstate. During World War II, its factories outside Seattle were “making more than a dozen B-17 Flying Fortress bombers in a single day,” Robison writes. After the war, Boeing turned its attention to the growing commercial aviation market and began producing a string of planes that would revolutionize air travel, including the 707, the 727, the 737 and the 747. Boeing engineers helped NASA land men on the moon, and the company remains a major military contractor and the maker of Air Force One.