THE DOCTORS BLACKWELL
How Two Pioneering Sisters Brought Medicine to Women and Women to Medicine
By Janice P. Nimura

In 1849, when Elizabeth Blackwell became the first woman doctor in America, the medical profession was neither well established nor well respected nor well paid. Germ theory was more than a decade away, and in hospitals for the poor, surgeons in blood-caked aprons went from handling corpses to delivering babies without washing their hands. In wealthy homes, physicians coasted on charisma and connections as much as skill. At all levels of society, doctors had little more to rely on than “purgatives, laudanum and lancets.” What kind of woman would fight to join their ranks?

In her richly detailed and propulsive biography of Elizabeth and her sister Emily Blackwell, Janice P. Nimura considers and discards a couple of possible origin stories. The most narratively appealing is 17-year-old Elizabeth’s experience caring for her father on his deathbed, in which “it is tempting to discern … the germ of her medical future.” Tempting, but too easy. No single story convincingly explains why a young woman “enthralled by literature and philosophy” should plummet into the earthy business of bodies.

Nor is the answer easy to detect in her personality. It was not a caring instinct that drove her — “I have no turn for benevolencies,” she wrote to her brother Henry in 1855 — or a curious one, to advance medical science beyond leeches, mercury and prayer. And while she was roused by the Transcendentalist Margaret Fuller’s exhortation to “let them be sea-captains, if you will,” she was no feminist foremother: She did not believe in suffrage and rejected the fellowship of the burgeoning women’s movement. She denounced women as “petty, trifling, priest-ridden, gossiping, stupid, inane,” and desperately in need of leadership from a superior being like herself. More than anything, Elizabeth Blackwell became a doctor to show the world that she alone could do it.

Or not quite alone. “Emily I claim you, to work in my reform,” Elizabeth wrote a few months before her graduation from medical school. “Will you answer to the call, & let us sketch our future together?” Emily was six years younger, and her legacy has been obscured by her sister’s pioneering example, yet Nimura makes the case that it was Emily who truly loved the practice of medicine, and that her partnership was vital to their shared success.

The Blackwell sisters were part of a large, close family of nine children, eight born in England to parents who were Dissenters, political reformers and abolitionists — even though their father, Samuel, made his living as a sugar refiner. In 1831 he moved his family to America. First to New York, where they encountered a ferment of new ideas and causes, then to Ohio, where Samuel hoped to square the circle of his business and beliefs by raising sugar beets, an alternative to cane much lauded by antislavery activists. They had barely finished unpacking when he died. 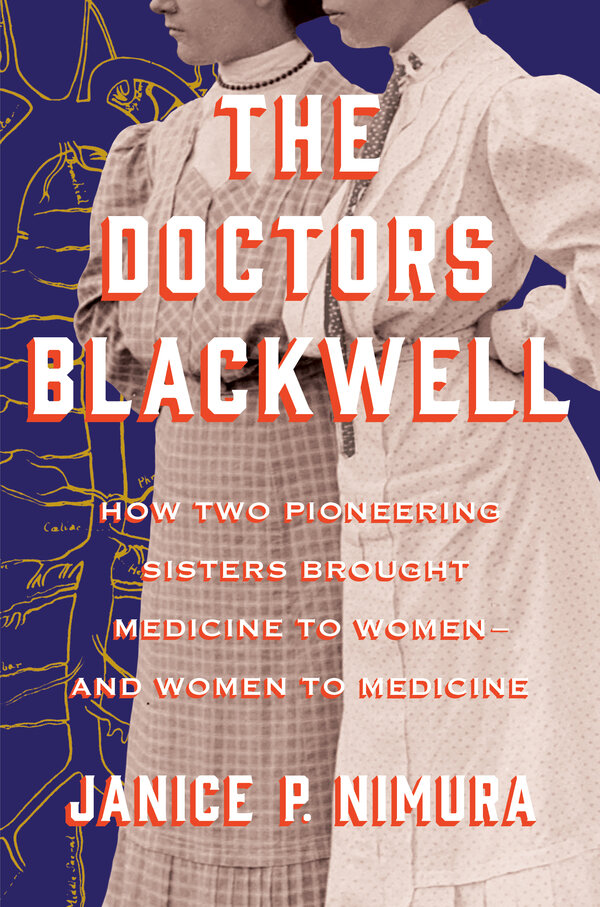 This loss and its dire financial consequences forged the Blackwell children, perennial outsiders, into an even more tightknit group, even as they had to scatter in pursuit of careers. One of the chief pleasures of this book is the liveliness of the siblings’ correspondence, revealed in judicious snippets expressing frustration, outlining plans, issuing orders and judgments, sharing joy and love. “Your letters always come to me like a puff of fresh North wind in a Summer’s day,” Elizabeth wrote to Emily. When they were short of money for paper and postage, they turned the page a quarter-turn and wrote across the lines at an angle, yielding a dense crosshatch: an apt metaphor for the way the siblings, who “loved and annoyed each other in equal measure,” would turn and turn about, only to enmesh themselves deeper in one another’s lives.

For both Elizabeth and Emily, the path to qualification as doctors was circuitous and frustrating. The idea of a woman studying anatomy alongside men was shocking, but the truer fear lurking under the moral outrage was that female doctors would wrest power from men who were just beginning to enjoy it, as the profession rose slowly in status. Wouldn’t female patients naturally choose to be attended by a woman, if they could — especially in the lucrative business of childbirth? As the dean of one college wrote candidly to Elizabeth, “You cannot expect us to furnish you with a stick to break our heads with.”

Finally, in the fall of 1847, Elizabeth’s persistence was rewarded when Geneva Medical College, in upstate New York, punted the decision on her application to its students, who voted to admit her. It was only the first of many doors she had to beat down — to be allowed in the dissecting room, to observe hospital treatments, to gain hands-on experience. When Emily attempted to follow her sister’s blazed trail, it had been scuffed over: Geneva did not make the same mistake twice, and Emily finally graduated from Cleveland Medical College in 1854.

While Emily was pursuing her diploma, Elizabeth was desperate to put hers to use. But returning to New York City to open her own practice, she found herself sitting and waiting for patients who did not appear. Dr. Blackwell was shadowed by the lurid specter of another female “physician,” known as Madame Restell, who peddled herbal remedies and surgical intervention for the oldest problem women faced. To escape the taint of association with the brazen abortionist, Elizabeth soon replaced her private practice with a clinic licensed by the state.

Power in medicine was shifting from individuals toward institutions, and there was only so much the Blackwell sisters could do alone. In 1857, they opened a larger infirmary, joining forces with a confident, highly qualified German midwife named Marie Zakrzewska, whom they called “Dr. Zak.” Over time, it evolved into a college for female doctors known for its rigorous standards — a symbol of progress, and an important legacy. When its doors closed at the end of the century, the advances of women in medicine were unstoppable.

None of the five Blackwell sisters married, prizing careers, one another and their independence too highly, yet their family circle nevertheless expanded. Henry Blackwell, most notably, married the prominent women’s rights activist Lucy Stone, fully supporting her decision to keep her own name, strike the word “obey” from her vows and use their wedding as a platform to denounce the institution of marriage. Elizabeth, under a cloud of depression in 1854, adopted an orphan named Kitty, who called her “Dr. Elizabeth” and grew up with an in-between status, “half ward, half servant.” Emily, too, adopted a baby and named her after Hannah, the beloved Blackwell matriarch. For the last 30 years of her life, she lived and worked with another Elizabeth, 10 years her junior, who arrived at the college in 1870 and never left.

Apart from a few early hints of romance, Elizabeth remained single, with Kitty as her constant companion. Always happier in England than America, she returned there for good after the infirmary opened, becoming more prominent as a writer and public figure than a practicing physician. In her extraordinary self-belief (“I know that I am one of the Elect”), her hardness and her idealism, Elizabeth is a striking figure, and Emily, self-doubting and hardworking, never quite gets clear of her shadow. To her credit, Nimura, who is also the author of “Daughters of the Samurai” (2015), about three Japanese girls who traveled to America to study in 1871, doesn’t strain to fit the sisters into the narrow shape allowed to feminist pioneers, as either virtuous role models or “badass” rebels against society. Instead, they emerge as spiky, complicated human beings, who strove and stumbled toward an extraordinary achievement, and then had to learn what to do with it.