Every industry has its clichés, and no cliché gets more mileage in and around book publishing than “editors don’t edit anymore.”

That may be a gross exaggeration, but it’s unlikely that any editor has a process as intimate, with shades of psychoanalysis, as the one often employed by Judith Gurewich, the publisher of Other Press.

But then Gurewich is not the average publisher. She grew up in Belgium and came to the United States with a law degree from Brussels University. She earned a Ph.D. in sociology from Brandeis, writing a thesis about the French psychoanalyst Jacques Lacan’s work and its possible applications to the field. She became a Lacanian analyst and still practices part-time.

When she founded Other Press in 1998, with Michael Moskowitz, also an analyst, the company published academic books about psychoanalysis. After a few years, Gurewich took the reins and left that niche behind. As a general-interest publisher, she still leans toward the intellectual: literature in translation, philosophy-inflected nonfiction.

Gurewich — “I am too European to reveal my age” — is an energetic, inquisitive and heady conversationalist. In her elegantly accented English, she refers to the subject of psychology as “a subverted form of theology.” She outlines Hegel’s master-slave dialectic in the easy way some people recap last night’s Yankees game. During a discussion of Lacan’s esoteric principles, she levels her piercing gaze and says: “The heart is the enemy of change.”

She brings her intensity to her uniquely aural editing process, hosting authors at her home in Cambridge, Mass., for days at a time while they read their manuscripts aloud to her.

“I thought, ‘Oh God, I’m going to be a prisoner of my editor,’” Michael Greenberg said of the invitation. “I had never encountered anything like this.” At that point, in 2007, neither had Gurewich. Greenberg was her first test case.

He was working at the time on “Hurry Down Sunshine,” a harrowing and lyrical memoir about his teenage daughter’s bipolar disorder. When he started reciting at Gurewich’s dining-room table, for what would turn out to be five or six hours a day for three days, he remembers thinking that the process felt “a little crazy.” 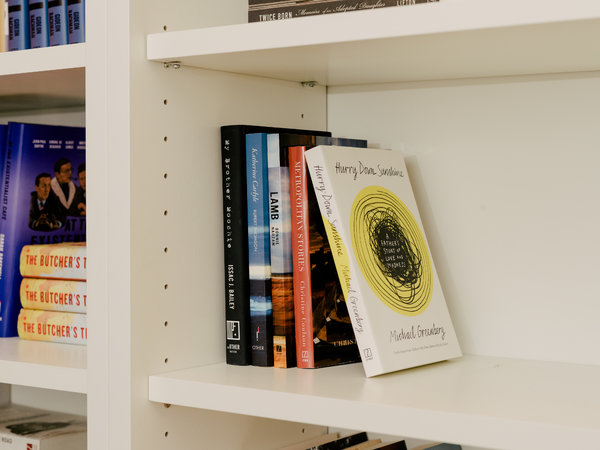 “Judith would say, ‘Something’s not right there.’ She’d scrunch up her face,” Greenberg said. At first, he was defensive when Gurewich flagged what she heard as problems. “Her English is very good, but it’s not her first language. I would hold that above her: ‘You don’t know what you’re talking about.’ But she never gave ground.”

When Thomson sat down to read his novel “Katherine Carlyle,” the book had two endings, one of them labeled an epilogue. He was “quite proud” of this clever doubling, he said, and “felt wonderful” as he read it. When he finished, though, Gurewich “was just shaking her head and saying, ‘That doesn’t work.’” A few minutes later, one of the endings had been moved to the front of the book.

Gurewich described her interruptions as physical reactions as much as, or more than, intellectual ones. “When my stomach intervenes, I stop the reading,” she said. “I ask what happened. My job is not to interpret.” She repeatedly emphasized that she’s not there to offer specific solutions, but to identify problems.

“You have to point to the defense that’s blocking the desire,” Gurewich said. “Never put your desire in place of theirs.”

Thomson recalled the novelist and literary critic John Gardner’s maxim about the “vivid and continuous dream” of reading fiction. “I think that’s what Judith gets in touch with when she listens,” Thomson said. “If she stops me, it’s because I’ve done something to break the dream.”

As a child, Gurewich began to narrate her own life in the third person. “It’s not because I’m smart” that the editing process works, she said. “It’s because I’m incredibly primitive.” While listening to an author read a manuscript, she added, “I forget who I am. I’m gone in the text.”

“Judith made me feel both tense and relaxed at the same time,” Greenberg said. “And both the tension and the relaxation came from the quality of her attentiveness. It was self-confrontational, not confrontational between us. You would have to confront things as you would with an analyst. She would prompt you.”

Christine Coulson, a longtime writer at the Metropolitan Museum of Art whose first book, a work of fiction set at the museum, is being published this fall, was the rare writer who did her sessions with Gurewich over the phone. “Every time, she was right,” Coulson said of Gurewich’s interventions. “I needed her instinct on things. I really wanted to know what she thought. It’s a funny dependency that develops.”

And as in a therapeutic relationship, that dependency can produce bumpy moments.

“We have opposite personalities,” Bonnie Nadzam said of her relationship with Gurewich. “Especially at that time in my life.” The author was 30 and living in Colorado when she made the visit to Gurewich’s home in 2010. “I was very meek, very unsure of myself. And Judith said, ‘This is how it’s going to go. This is the chair you sit in.’”

The two were working on Nadzam’s unsettling first novel, “Lamb,” about a grieving middle-aged man who befriends an 11-year-old girl. Nadzam was pleased with the vocal editing process. One key development was Gurewich’s suggestion to scale back moments of suggested physical intimacy in the book, so that they wouldn’t overshadow its psychological elements or potentially alienate readers.

It was afterward, when Nadzam was publicizing the novel, that tension arose. The press was interested in comparing the book to “Lolita.” Nadzam found the comparison facile and resented the emphasis on it, but Gurewich disagreed, thinking it was a fertile area of discussion.

“I had to begin to navigate this ground of becoming more confrontational and protective of my work with Judith,” Nadzam said. “It was uncomfortable because we had a great working relationship, but I needed to push back. And she wasn’t used to me pushing back.”

Despite that tension, and the fact that Gurewich passed on publishing Nadzam’s next novel, the two have become close friends.

Isaac Bailey’s work with Gurewich was a clear case of the relationship feeling as much like therapy as editing. Bailey’s 2018 memoir, “My Brother Moochie,” is about the experience of his large, African-American family in South Carolina after his oldest brother received a life sentence for murdering a white man in 1982. Bailey was 9 at the time. All these years later, he had deep emotional concerns about how to write about sensitive family material. Gurewich “pushed me beyond that,” he said, and “made it very clear that I should not tiptoe.”

“At least initially, it seemed a bit off-putting,” Bailey said of the editing sessions. “She has this laserlike intensity. All of the niceties just go by the wayside. Once you get used to that, it’s much easier to be very frank with her as well. And it sharpens your thinking all around.”

The niceties might take a back seat during the readings, but the rest of the visit is amenity-filled. “You’re embraced with the most wonderful hospitality,” Greenberg said. “You’re enfolded into her family life and her social life. There’s a dinner every night.” Nadzam compared the experience to an extended Thanksgiving and mentioned that Gurewich and her husband, Victor, introduced her to the TV series “Mad Men” while she was there, watching five episodes each night.

Thomson said he reads his writing aloud when he’s alone but that reading to Gurewich is a “much purer, starker version of that process.” He said he’s “slightly confounded” when he tries to name the difference, but he can feel it.

“There’s even less room for self-deception if there’s two people in the room,” he said. “Maybe there’s no room.”