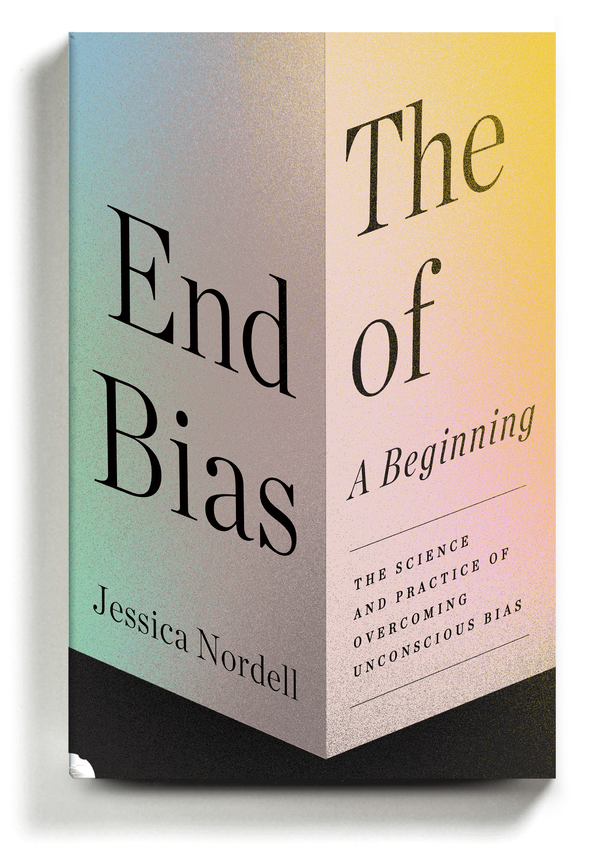 The varieties of awfulness are myriad, with people mistreating one another for any number of reasons, but in “The End of Bias,” Jessica Nordell guides us through bad behavior of one particular kind. Instead of the “unvarnished cruelty” of the person who deliberately inflicts suffering, she turns our attention to something less brazen and more insidious: the harm that people wreak unthinkingly and unintentionally because they hold unexamined stereotypes.

“Most people do not go into their professions with the goal of hurting others or providing disparate treatment,” Nordell writes, contending that the gap between what people believe and what they do might be hypocritical, but it also offers the possibility for change. “If people come to see that they themselves inadvertently discriminate, but they also value fairness and equality, that realization can be a spur to action. People want to be internally consistent.”

Reassuring lines like these might make “The End of Bias” sound like an anodyne, standard-issue business book, but Nordell, a science journalist with a degree in poetry, is too reflective a thinker to make this just another well-meaning tribute to the importance of diversity training. In fact, when it comes to diversity training itself, “the results are often mixed,” she writes. Managers can feel as if their autonomy is being undermined, with white men in some cases reacting to pro-diversity messages as if they’re being presented with a cardiovascular threat. Employees of color can feel as if they’re being made into a spectacle — expected to “teach” white people and serve as “an instrument for others’ self-improvement.”

But leaving employees to figure things out by themselves can deepen the problem. Nordell cites a study where nearly 90 percent of respondents reported that their own objectivity was above average — and this belief in one’s own objectivity correlated with discriminating against other people more.

“The End of Bias” begins with the story of Ben Barres, a transgender neurobiologist who transitioned in his 40s and was startled to realize how his ideas and authority had been devalued before — “not overtly, generally, but in a way that was noticeable when that devaluing suddenly vanished.” It’s this subtlety — the ordinary banality of it — that leads some skeptics to question how much everyday bias actually matters. In 2011, the Supreme Court justice Antonin Scalia wrote a majority opinion in a class-action lawsuit filed by women working at Walmart; Scalia argued that those women couldn’t have been denied promotions and steered into low-wage positions because there wasn’t evidence of a concerted effort to keep women down.

“Most managers in any corporation — and surely most managers in a corporation that forbids sex discrimination — would select sex-neutral, performance-based criteria for hiring and promotion that produce no actionable disparity at all,” Scalia wrote (a strikingly wide-eyed assertion that gives “the distinct impression,” Nordell writes, “that Scalia had never had a job”).

What he didn’t entertain was the possibility that individual acts of discrimination could add up to enormous companywide disparities, Nordell points out. Workplaces, to say nothing of societies, are complex systems that the human brain can have a hard time grasping in their totality, and so people often revert to explaining discrimination in simple terms — which is to say, they revert to explaining it away, as the inevitable result of differences between groups. Or else they try to minimize it — to dismiss bias as the problem of a few bad apples who don’t necessarily have the power to shape an entire corporate culture.

Wanting to understand the dynamics of bias — the way it can generate feedback loops with compounding effects — Nordell teamed up with a computer scientist to create a simulation of a fictional company called NormCorp, where there was a 3 percent difference in how women and men were treated. By the end of the simulation, 82 percent of NormCorp’s leaders were men.

This dimension to bias, as something that occurs over time, is an essential part of Nordell’s analysis. Too often people think in terms of discrete moments — a degrading meeting here, a fleeting comment there — but Nordell points out that bias is often iterative and chronic, taking place over many interactions. The effect is cumulative, not just for the company but for the person subject to it. She cites research suggesting that subtle bias can in some cases be more detrimental than overt bias, because navigating ambiguity is so mentally and emotionally taxing. It can leave people “questioning their own perceptions,” she writes, “a sort of internal gaslighting.”

Nordell doesn’t just cling to the relatively calm shores of workplace etiquette. She also looks at bias in education and health care, in policing and even genocide. Part of her argument is that the distinction between individuals and culture isn’t inviolate; they nurture each other, for better and for worse. A culture encourages people to adapt to its contours, just as those contours can emerge as the product of individual beliefs.

Nordell admits to becoming defensive when an article she wrote a few years ago was criticized for what she characterizes as its “paternalistic” assumptions. She reacted with “denial, anger, bargaining,” and recalls that Elisabeth Kübler-Ross originally developed such stages of grief to describe how people reacted when they learned they were ill. “Here, my illness was a cultural pathology so saturating it took me years to recognize,” she writes.

As Nordell knows, the very concept of unconscious bias can sound exculpatory — suggesting that people can’t be responsible for something if they’re oblivious to it. But this isn’t a book that lets anyone off the hook. If anything, “The End of Bias” argues for a more profound sense of responsibility; Nordell describes bias as a kind of theft, one that deprives individuals and undermines entire societies. She also compares encounters between humans to the environmental concept of an edge, the place where two ecosystems meet. It can be a fraught space, full of peril; but it can also be a place of stunning fertility and biodiversity. “In the ferment of that edge,” Nordell writes, “something new can grow.”