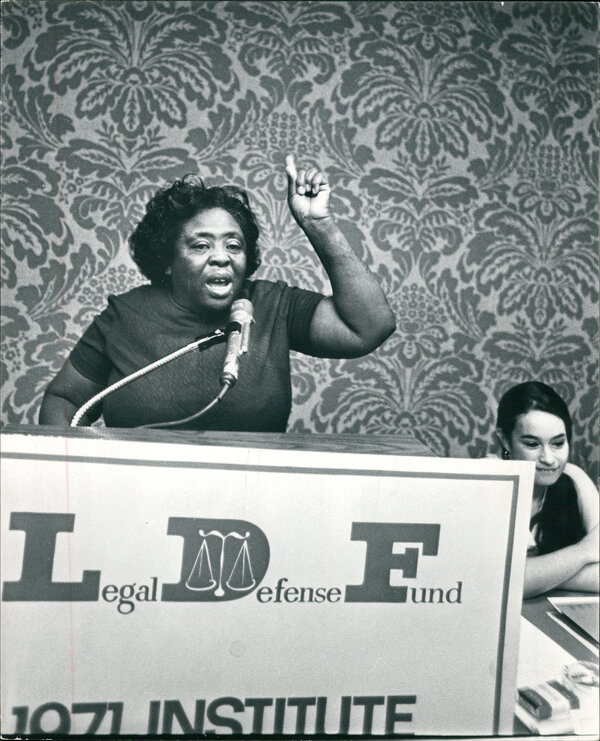 UNTIL I AM FREE
Fannie Lou Hamer’s Enduring Message to America
By Keisha N. Blain

On Aug. 22, 1964, Fannie Lou Hamer, a Black sharecropper from Mississippi, took her place before the credentials committee at the Democratic National Convention in Atlantic City, N.J. She was there to challenge her home state’s attempt to seat an all-white delegation. On that sweltering day, in front of television cameras, Hamer proceeded to recount her efforts to register to vote in a state that historically had denied Black citizens the right to do so.

Almost two years before, she said, she had journeyed 26 miles by bus to a distant courthouse to take the state’s required literacy test. Afterward, she and the group of Black citizens she was traveling with were detained by the police — an apparent attempt to intimidate them — and when she arrived home, she found that her white landlord, incensed over her determination to register, was evicting her from the farm where she worked. The following June, she went on, as she returned from a voter registration workshop, authorities in Winona, Miss., arrested her and her traveling companions. Hamer told the credentials committee of being restrained, beaten with a blackjack and sexually assaulted by the police. “Is this America,” she asked boldly, “the land of the free and the home of the brave, where we have to sleep with our telephones off the hooks because our lives be threatened daily, because we want to live as decent human beings, in America?”

While Hamer’s plea to seat Black delegates from her Mississippi Freedom Democratic Party failed, she succeeded in imprinting on the American consciousness a vivid image of the viciousness of white Southern racism. After the convention, she returned to Mississippi to continue her fight to register Black Americans as well as to battle against all forms of discrimination. Plain-spoken, with only a sixth-grade education, Hamer was charismatic and a brilliant grass-roots organizer. Over time, she successfully pushed Mississippi to open up voting to Black people, transforming local, state and national politics, a process made a little easier after the passage of the Voting Rights Act in 1965.

Nonetheless, Hamer remains largely unacknowledged in popular narratives of the civil rights movement, which still train most of the spotlight on its male leaders. But those men, including Martin Luther King Jr., were affected by Hamer’s presence in that long fight. Now two different yet complementary books, “Walk With Me,” by the historian Kate Clifford Larson, and “Until I Am Free,” by the historian Keisha N. Blain, seek to restore Hamer to her proper place in history by contextualizing her life within the larger struggle for equality and social justice.

Larson, a visiting scholar at Brandeis’s Women’s Studies Research Center, draws from pathbreaking research on Hamer, including books by Kay Mills, Chana Kai Lee, Earnest Bracey and Maegan Parker Brooks, as well as oral histories and newly available census records and digitized newspapers, to offer an inspired account of Hamer’s contributions. “Walk With Me” is a gripping and skillfully researched political biography that embeds Hamer’s personal history within a compelling account of the post-World War II civil rights movement.