On a winter day in a northwestern Chinese village about a thousand years ago, a merchant with a cart full of pottery found himself stuck in the snow, making the route impassable for hours. Finally, a traveler approached and asked, How much for the jars on your cart? The merchant replied, 7,000 to 8,000 coins. The traveler offered the equivalent in plain-weave silk, known as lian. The merchant accepted and, with his cart lightened, was able to pull out of the icy drift.

During the Tang dynasty (618-907), textiles were often used as currency, Virginia Postrel explains in “The Fabric of Civilization: How Textiles Made the World.” And that’s not all. “The story of textiles encompasses beauty and genius, excess and cruelty, social hierarchies and subtle workarounds, peaceful trade and savage wars,” she states in her afterword — a powerful argument I wished she had put at the beginning of her book. “Hidden in every piece of fabric are the actions of curious, clever and desiring men and women, past and present, known and unknown, from every corner of the globe.”

An award-winning journalist, an opinion columnist for Bloomberg and the author of three previous books, including “The Substance of Style,” Postrel specializes in sharp, informed commentary on broad subjects. So it’s a surprise to find very little opinion in “The Fabric of Civilization.” Instead, the book is, as she puts it, an “exploration originated in wonder.”

She isn’t kidding. We are taken on a journey as epic, and varying, as the Silk Road itself. Postrel begins with the Bronze Age civilization of Knossos, on Crete, where Daedalus was said to have crafted the wings that carried him and Icarus over the Aegean. Knossos, as it turns out, “was a textile superpower,” Postrel writes. So were Egypt, China, Mexico, Guatemala, Japan, England, Italy, France and many more cultures we visit. We learn the history of cotton, flax, silk and wool. We witness the birth of the factory system, not in late-18th-century England, as has long been taught, but in Piedmont, Italy, two centuries earlier. We see how natural dyes are made and how chemical dyes overtook them, how natural woven fabrics are made and how synthetics overtook them too. 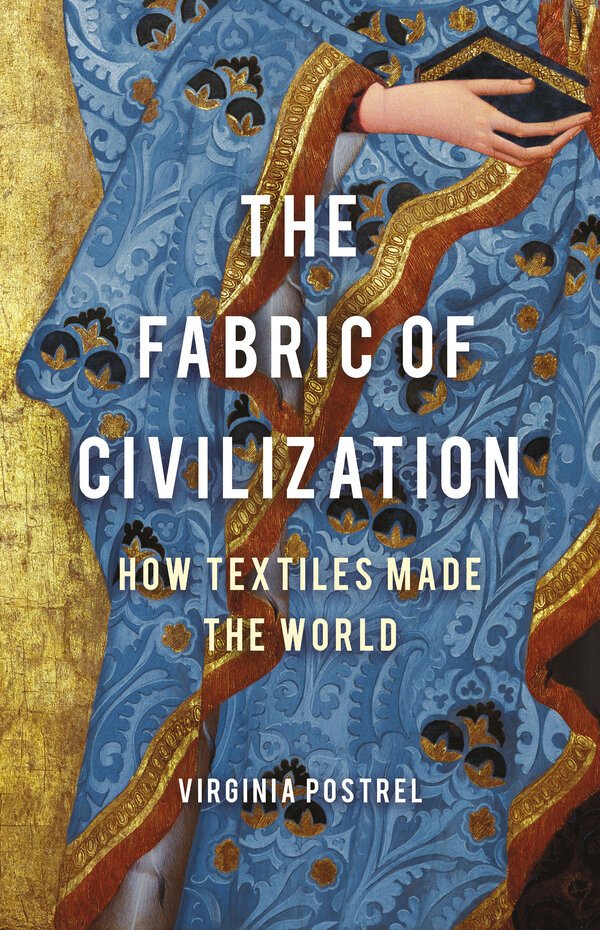 At times, Postrel loses her way — and, in turn, us. She explains the mechanics of cloth construction like a scientist, and includes diagrams, in case we don’t get it. (I still don’t understand how Jacquard’s punch cards work, even with the drawings.) She quotes wonky experts or, vaguely, “a historian” on basic information, when she could have told us herself, less dryly. Thankfully, she does drop in witty bits on occasion to unpick the jargon. After one starchy quote from researchers about how the Chinese draw loom surpassed “woodblock printing of the same period,” Postrel explains: “If a Lao loom is Ms. Pac-Man, a draw loom is Grand Theft Auto.” Such asides help lighten seriously unleavened sections of the book.

Postrel soars — and there are set-piece gems, to be sure — when she turns away from academia, and employs her well-honed reporter’s skills. In her chapter on dye, for example, she walks us through the process of brewing natural indigo: “It’s got a lot of rotten, some fecal notes, a lot of urine in there,” Graham Keegan, a Los Angeles textile designer, tells her, as he sniffs a jar of slurry. “It’s got it all.” Elsewhere, she recounts the tale of an 18th-century French textile designer, Philippe de Lasalle, the so-called Raphael of Silk, who signed his glorious “woven portraits” in “Latin capitals like the inscription on an ancient Roman building: ‘LASALLE FECIT.’” That detail tells us everything.

At the close of her book, Postrel admits to growing up in “a town that styled itself the ‘Textile Center of the World.’” I had to Google to identify it as Greenville, S.C., which served as America’s textile manufacturing capital until the passage of the North American Free Trade Agreement in the early 1990s drove some of its companies to close, cut jobs or move offshore, gutting the local economy. Today, Greenville is among the many former Carolina mill towns experiencing a resurgence in textile manufacturing, thanks to reshoring. Much of it is driven by Chinese-owned companies taking advantage of government financial incentives. Postrel skirts all that. Indeed, she insists that coming of age in a textile town and having a father who early in his career worked in “synthetic fibers” had no bearing on her book.

That’s a shame. A truly personal take, as Stephen Yafa offered when he delved into the history of his hometown, Lowell, Mass., America’s first cotton manufacturing center, for his engaging “Cotton: The Biography of a Revolutionary Fiber” (2005), could pull more readers in and turn “The Fabric of Civilization” from an exercise in imparting information into something more intimate. Postrel talks about how the textile business is forever migrating, but she doesn’t look at how such migration, post-NAFTA, impacted her hometown or the surrounding region. There are references in the book to the College of Textiles at North Carolina State University, four hours by car northeast of Greenville, which offers extraordinary support for fabric research and innovation. Why isn’t there a deep dive into the institution? And who are its scholars who doggedly keep old textile knowledge alive and push new ideas forward? Maybe Postrel’s family wasn’t in the business of cloth. But she’s a Carolinian, who presumably passed by textile factories and went to school with kids whose parents were in the industry. Weaving in some of this history would have made the book warmer, and more engaging.

“The Fabric of Civilization” is not a definitive work on the subject, in the manner of Sven Beckert’s Bancroft Prize-winning “Empire of Cotton” (2014). No, it is more like a swatch of a Florentine Renaissance brocade: carefully woven, the technique precise, the colors a mix of shade and shine and an accurate representation of the whole cloth.