“Bashar al-Assad assassinated!” shouted a man as he cycled past Manaf Tlass, an exiled Syrian general once a member of Assad’s inner circle, as he sat in an outdoor cafe in Paris in 2017. A childhood friend of the Syrian president’s, Tlass had fled Syria five years earlier, denouncing the government that he expected to fall at any moment. The cyclist’s cry may have suggested that this outcome was finally at hand, but Tlass greeted the news with a pained smile. “That’s Ali, the guy I buy my newspapers from. He tells me this every time I see him,” he explained to Sam Dagher, the author of “Assad or We Burn the Country.”

Tlass, the main insider source for this account of the Assad family’s half century in power, was one of many who underestimated the regime’s strength after the start of the Arab Spring uprising in Syria in 2011. “We’re coming for you,” one rebel threatened Assad in a television address the following year. Opposition forces attacked Damascus and Aleppo, the two biggest cities. Foreign governments assumed that Assad was on his way out and overconfidently discussed the best place for him to go — Africa or South America — after he had stepped down. Secretary of State Hillary Clinton assured more than 100 foreign ministers assembled in Paris in the summer of 2012 that there was “a steady inexorable march toward ending the regime.”

The march turned out to be in the other direction: Assad and his regime gradually reasserted their grip and today hold most of the country, aside from the scantily inhabited northeast, ruled by Kurdish-led forces backed by the United States, and the large enclave around Idlib in the northwest held by Al Qaeda-type groups. The regime was never quite as weak as it appeared to the outside world: Utterly ruthless, it was prepared to kill anybody who got in its way, had a cohesive leadership united by kinship and kept the loyalty of core units of the army and Mukhabarat (secret police), which were often led by members of the Alawite sect, approximately two million strong, who saw themselves as battling not only to keep power but for their very existence.

The means used by the regime to defeat its enemies had not changed much since Hafez al-Assad, an Alawite air force general, seized power in 1970. Dagher describes in detail the crushing of an uprising in the Sunni city of Hama in 1982 by indiscriminate bombardment and mass executions (methods very similar to what was inflicted on places like Daraa, Homs and Douma 30 years later). The militarization of opposition to Bashar al-Assad’s regime actually worked in the government’s favor because it had superior forces, leaving Syrians with a stark choice between the Assad clan and an insurgency that came to be dominated by Sunni Arab religious extremists. 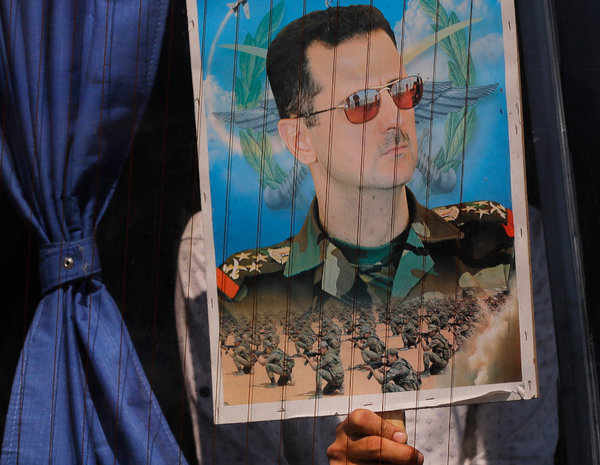 Dagher is at his most convincing when drawing up the charge sheet against the Assads: Hafez, Bashar, his younger brother Maher, his maternal cousins Rami and Hafez Makhlouf, along with long-term loyal followers of the family like Mustafa Tlass, the defense minister, who was Manaf’s father. “Ten families run Syria and control everything,” one dissident economist is quoted as saying. After Bashar succeeded his father as president in 2000, there were hopes of liberalization. “People thought maybe the reign of the kingdom of fear was coming to an end,” recalled a Damascus native who returned home. Instead, Syria remained a police state in which there was a lot to be frightened of — arbitrary arrest, torture and execution inside a prison system of hideous cruelty. In Dagher’s book, this is graphically described from grim personal experience by the human rights lawyer Mazen Darwish, who had been one of the earliest protesters.

The book’s subtitle is “How One Family’s Lust for Power Destroyed Syria,” but Dagher overemphasizes the degree to which the Assads differed from other dictators in the region. Their hated rival, Saddam Hussein, ruled Iraq in much the same way as they ruled Syria, coup-proofing his regime through multiple forms of allegiance and repression, drawing on loyalties of clan, sect and party, distributing patronage and setting up competing security forces. The popular uprisings of 2011 failed in Syria, but they also failed almost everywhere else in the Middle East, leaving Syria, Libya and Yemen to be ravaged by ceaseless warfare and producing even more repressive autocracies than before in Egypt and Bahrain.

Dagher is open about his detestation of the Assad family and all their works, which he observed at close hand for two years as the only Western reporter stationed permanently in Damascus. He was briefly held by pro-regime militiamen in an underground prison and was summarily expelled by the Mukhabarat in 2014. This gives his description of events a credibility lacking in many other accounts. But there is also a tension between his tendency to blame everything on the Assads and seeing them as the consequence of religious and social hatreds. Speaking of the major fault lines that have fueled conflicts in Syria since the 1960s, Dagher writes: “Broadly, it was the conservative Sunni majority against the secular and, in its eyes, godless minority-led regime.”

For a short period in the early days of the protests, it seemed possible to imagine that a liberal democratic agenda might succeed in Syria. The international media were often blind to the extent to which the odds were stacked against such an outcome. Foreign governments were equally unrealistic, though their diplomats in Damascus were far less sanguine. One ambassador wrote at the height of the demonstrations in July 2011 that Assad could count on 30 to 40 percent of the population, half of those supporters being Alawites, Christians or members of other minorities.

Traditional religious animosities, exacerbated by mounting social inequality, always shaped events. The center of Damascus filled with luxury shops and boutique hotels, but it, along with other Syrian cities, was ringed by what became known as “the misery belts,” inhabited by people fleeing poverty and drought in the countryside. “Hafez ruled Syria through a pact with the impoverished Sunni countryside,” Manaf Tlass said. “Sure, everyone was trampled on, but at least their basics were taken care of.” This pact lapsed under Bashar al-Assad as the inner circle of the regime gained great wealth in an orgy of crony capitalism. It was to be the ignored rural and slum-dwelling Sunni who were to form the hard core of the insurgency.

Once armed action had replaced peaceful protests from about the end of 2011 and the beginning of 2012, the initiative passed to outside powers. The regime and the insurgents both needed money, weapons and, at a slightly later date, foreign fighters; these could come only from abroad. A fatal paradox for the Arab Spring in Syria (and the rest of the region) was that the main financial backers of a movement that had begun by demanding freedom and democracy should then become dependent on Saudi Arabia, Qatar and the United Arab Emirates, which were resolutely antidemocratic and sectarian, and the last absolute monarchies on earth.

Patrick Cockburn is a Middle East correspondent for The Independent of London. His latest book is “The Age of Jihad.”