When retired midwife Jennifer Worth read an article asking if there was a writer who ‘can do for midwifery what James Herriot did for vets’, she took up the challenge.

Her three memoirs of delivering babies in one of the most deprived areas of London were the basis for the BBC’s hugely popular Call The Midwife, still going strong after 11 series.

Worth’s books are notable for the unflinching depiction of life in the East End; the squalid, overcrowded accommodation, the frequent outbursts of violence and — paradoxically — the strong sense of community.

The social historian David Kynaston, author of the splendid Austerity Britain, admitted he had expected Worth’s books to be ‘sentimental tosh’, but ended up lauding them as ‘a major historical document’ about the Docklands pre-1960.

Jennifer Worth died in 2011, shortly before the first episode of Call The Midwife was broadcast. 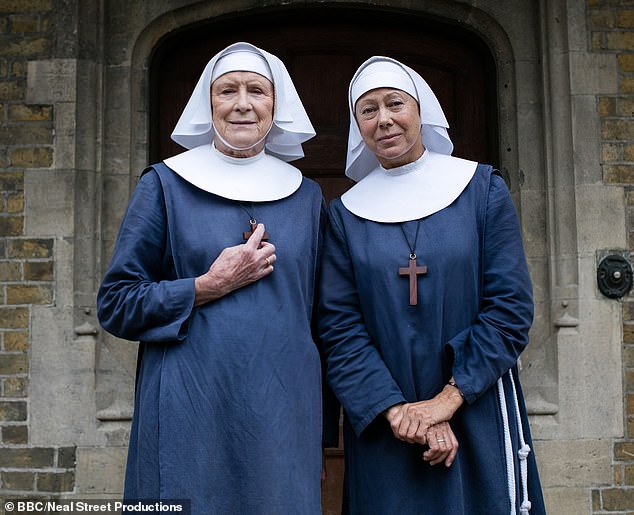 Jennifer Worth’s three memoirs of delivering babies in one of the most deprived areas of London were the basis for the BBC’s hugely popular Call The Midwife (pictured), still going strong after 11 series

This new book, edited by her daughter Suzannah, combines some recently unearthed stories with chapters taken from her previously published books.

The new material mostly features Fred, the convent’s odd-job man, who always has a moneymaking scheme on the go, whether raising quails, working in musical halls or selling toffee apples.

The best chapters, though, come from Worth’s early books. Who could resist Chummy, winningly played on television by Miranda Hart; a student midwife with a triple-barrelled surname who is ‘larger than life, awkward, shy and clumsy; a social misfit with a heart of gold’?

There is a gripping chapter in which Chummy delivers a baby on a ship down by the docks. Whereas James Herriot didn’t give too much detail about what happened once his hand was inside a cow, Worth spares the reader few gory details about human births. Some may feel queasy, but reading it you are on the edge of your seat.

One of the quirks of Worth’s story is that, rather than being based at a hospital, she lived with nuns during her time in the East End. She soon became fond of the nuns, especially Sister Monica Joan, who was ‘intelligent, highly eccentric, wilful and on occasion downright rude’.

She was addicted to taking taxis all over London, costing the convent a fortune in fares; when she was told to stop, she simply wandered into the traffic and asked surprised drivers to give her a lift.

When Sister Monica Joan died very suddenly of a stroke, one of the nuns suggested that she must have gone ‘straight to Heaven by taxi’.