"Sasha Milenkovic was shot dead in the basement of the Blackmarket club in Chippendale on November 9th 1997," Don Walker writes in a typically terse introduction to another sheaf of songs. "Two years prior, he, [Hells Angels boss] Felix Lyle and Tim Fitzpatrick had done my family a big favour." 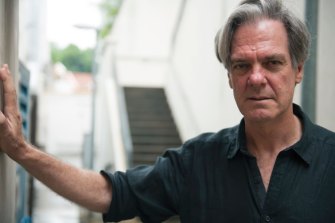 In Don Walker’s lyrics the line between observation and invention remains obscured.Credit:Bleddyn Butcher

The songwriter reveals he'd repaid said favour with a gig at the Bandidos' clubhouse in western Sydney, but the precise nature of the debt is none of our concern. He went to the bikie gang sergeant's funeral with his wife (name withheld).

"If you were curious about who really controlled Sydney in the nineties," he allows in passing, "you had to be there that afternoon."

If you're curious about anything else, well, here's a song.

Sasha's Gone is one of many in this seemingly exhaustive anthology that the great Australian songwriter is yet to record. It's no expose. The shell-shocked lattice of haiku verses comprise a stunned phone call, a recollection of two fire-lit eyes and a memorial convoy down Cabramatta Road.

"Sasha knew, one law/ The colours he wore/ That day/ Don't run." 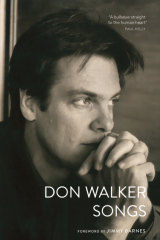 Hundreds of songs, from eight Cold Chisel albums and nine more with other bands, fill these pages with similarly gripping pictures, each cropped at the margins with the skill of a witness-protection officer turned crime-fiction writer. The line between observation and invention remains obscured by smoke, and maybe the occasional mirror.

It's the way that Don Walker fades into the noir that makes his stories jump. His milieu of rejects, desperadoes and criminals parades without filters of judgment or explanation: all show and no tell. Like the damaged Vietnam vet in his best-known song, Khe Sanh, we can search for answers all we like, but all we'll find is another departure lounge.

The road and seedy hotel rooms are endless in Walker's lyrics. Hitch-hikers and truck drivers, drifters and drunks, "all-night lechers" and ladies whose "eyes are as cold as a centrefold" dance in sinking spirals, wringing life-giving comfort from flesh and cash and what seems, always in hindsight, like it might have been the real deal.

The road can uncover true crimes of history, as in Barlow and Chambers and the Kimberley pearl-diving slave trade ballad, Three Blackbirds. 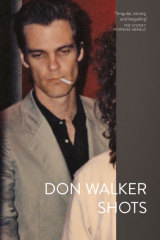 And it can throw young men too often to their deaths, as in Letter To Alan, Johnny's Gone and No Reason: "The towies told us later/ He was airborne when he hit the tree/ With a blood alcohol of one point seven or more/ How they'd never seen a body spread/ So far between his pretty head/ And his Cuban heeled riding boots before".

Which isn't to say that darkness is the default. From Cheap Wine to Matchbook; Hully Gully to The Backroom at Dougie and Glennie-Rae's Tikki Bar, the bright lights of city pubs and the sprung dancefloors of country towns offer a recurring thread of salvation between the contemplative hangovers of Bus Station and Empty Dance Hall.

And black as it is, Walker's comedy can be priceless. Harry Was A Bad Bugger is a classic murder mystery that hides its secrets in plain sight. With just a drive-by glimpse on a street corner, the narrator of Young Girls daydreams the great romantic escape of the century: him driving coal trucks "up north" while she waitresses in a truckstop cafe. Mate. Paradise.

Not unlike his episodic memoir of 2009, Shots (reissued as a hardback pair with this new volume), Walker divides his chapters into life phases chiefly defined by geography. His 1970s living at the Plaza Hotel in King Cross are neon-soaked reflections of down-at-heel locals and "Second-rate musicians/ Feeding infantile illusions".

The lean post-Chisel years of '84-'88 make for the bleakest reading. "That evil harbour horn/ Leaks our across the dawn" as the writer bottoms out on hollow memories on a lonely sojourn from Townsville to Siberia.

His return to Australia for "a personal matter", vaguely sketched in both books as a custody battle for his daughter, leads to his richest phase of songwriting. The seam of small-town tragedy that runs from The Year That He Was Cool to Damaged People and West of the River is sketched from a similar perspective to that prodigal son of Flame Trees: close enough to know each character by name, and worldly enough to love them regardless.

It's love, somewhat surprisingly, that overwhelms the red dirt and mosquito coils in the home stretch of the anthology. Walker devotes two of his handful of tight prose introductions to profoundly personal connections, and songs tend to zero in on late-night reflections where, "In the temple of my heart, a candle burns for you".

In a business that demands its authors show their faces and spill their guts at every stanza, that candle goes some way to illuminating the man behind the songs. But it's telling that the last one in the book, an epic and often hilarious ballad called Darwin, is expressly about the art of disappearing into the landscape.

"If my heart was a town," he writes in another song, a few pages earlier, "There'd be long empty bars." There's more to it than that, but if it all ended there in a puff of smoke, you'd know as much about Don Walker as you need to.