It's hard to imagine a book more anticipated than Margaret Atwood's The Testaments. It's been almost 35 years since its predecessor, The Handmaid's Tale, first captivated readers with its account of a young woman forced into reproductive slavery by a theocratic regime. Then two years ago, the blockbuster first season of the TV adaptation turned the story into a cultural phenomenon. 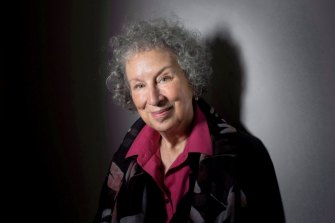 Margaret Atwood is great storyteller and the pages of The Testaments seem to turn themselves.Credit:Darren Calabrese

Protesters dressed in the distinctive red robes and white bonnets of the handmaids have haunted legislatures voting on abortion rights and stood sentry outside hearings for a US Supreme Court nominee accused of sexual assault.

As if that wasn't enough of a build-up, The Testaments was shortlisted for the Booker Prize before it had even been published. The judges had to sign "a ferocious non-disclosure agreement" that prevented them saying anything about why they had listed the book except this: "It's terrifying and exhilarating."

It's both of those things, as well as sly and funny, filled with Atwood's characteristic joyful and subversive wordplay. And while much of the discussion will, rightly, be about its relationship to our present political realities, it shouldn't go unmentioned that everything else aside, Atwood is a bloody great storyteller. The pages of this great big book all but turn themselves.

The Testaments takes place 15 years after the end of The Handmaid's Tale. This means that fans of the television adaptation don't need to disregard the story told in the second and third seasons of the show (the first season stuck closely to the novel) and that those who've not seen the show won't be confused or irritated by the imposition of TV plot points. 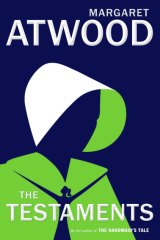 It also means that the Gilead of this book is a different beast from that of the first. The zeal-infected founders are now the comfortable establishment and the first generation of children raised entirely in Gilead are coming of age.

The Testaments splits its narration between three characters, so reading it is not the immersive experience of the previous book in which we sink deeply into its narrator Offred's point of view and stay with her the whole horrifying, heart-wrenching way. The trade-off is a dramatically increased understanding of Gilead – how it works, what it's like to live there for women other than handmaids and how it's seen by the outside world.

One of the narrators is 14-year-old Agnes, daughter of a high-ranking Commander and soon-to-be-wife of a different high-ranking Commander. Her whole life she has been told that she and her friends are "the beneficiaries of the sacrifices of our forebears. We were constantly reminded of this, and ordered to be grateful. But it's difficult to be grateful for the absence of an unknown quantity."

Agnes' story of discovering just what it is she's supposed to be grateful for, is interspersed with the testimony of another teenage girl, Daisy, raised free over the border in Canada. Daisy's sections take us into the Mayday movement, which helps smuggle people out of Gilead, and introduces us to the creepy Pearl Girl missionaries who travel the world attempting to recruit new "pearls" – healthy young women – for the regime.

The third narrator is a familiar character from the first book: Aunt Lydia, chief female enforcer of the regime's rules and a source of pain and terror to Offred and the other handmaids. Lydia has been so successful in controlling the women of Gilead that she has become, at the start of The Testaments a literal icon. A statue in the courtyard of a training academy, a framed picture in classrooms, "a bugaboo used … to frighten small children — If you don't behave yourself, Aunt Lydia will come and get you!" She is "swollen with power" but also "nebulous with it — formless, shape-shifting. I am everywhere and nowhere." 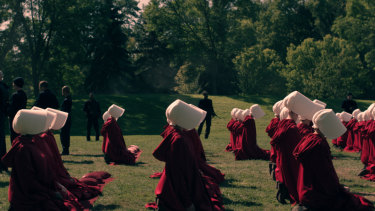 The Testaments gives the reader a greater understanding of the world of Gilead.Credit:

She is telling her story, in part, to assert her humanity, show the "ordinary woman" who animates the legend. An ordinary woman who is not, as it happens, a true believer in Gilead or God or anything except herself. It's a shocking revelation – not just that the top enforcer doesn't believe in the things she's tortured and killed over, but the implication that perhaps others at her level feel the same way. Like all totalitarian states this one relies on everyone thinking that everyone else believes the official truth. Lydia has "buried a lot of bones" to keep that lie alive. "Now," she tells us, "I'm inclined to dig them up again."

Lydia takes us back to the days immediately following the revolution, when she, a "lady judge", was herded at gun point into a stadium with other professional women past childbearing age. There they are held captive, allowed to become hungry, filthy – "To breathe was to be nauseated" – and existentially afraid. Daily executions quickly become routine, until one day there is a variation: "three of the shooters were women." It's a chilling moment. Lydia calls these women monsters; we know that she will soon become one of them.

All three main characters are, or have been, victims of the regime.

Lydia's experiences here are not presented as excuses for her later monstrousness. All three main characters are, or have been, victims of the regime but this book is not as concerned with their suffering so much as their responses to it as women of relative privilege.

In The Handmaid's Tale the reader's queasiness and dread come from wondering "could this happen here?" In The Testaments it comes from wondering "what horrors might we have come to accept as normal?" In empathising with these characters we're pushed beyond imagining how we might respond as victims of such a regime and made to confront our potential complicity.

How does it feel to save your own skin by taking charge of the enthusiastic flaying of others? Is that any worse than being so grateful for your saved skin that you stay wilfully ignorant about why it needed saving in the first place?

It's this interest in individual responsibility within unjust systems that makes The Testaments an ultimately hopeful book despite the dark territory it traverses. The first hint of the light at the end comes very early when Daisy from Canada – a girl who seems to have no skin in the Gilead game at all – begins her testimony: "They say I will always have the scar, but I'm almost better," she says. "So yes, I think I'm strong enough to do this now."

Emily Maguire's latest book, This is What a Feminist Looks Like, is published by the National Library of Australia in October.