The women slugging it out at the male-dominated corporate headquarters of Truviv, an athletic apparel brand in Dallas, have two things in common: They’re all mothers and they all move in the dark shadow of their abusive colleague Ames Garrett, who’s about to glide into the suddenly vacated C.E.O. position. Fed up with Ames’s evil ways, the lawyer Sloane Glover adds his name to a “BAD Men” list, then she and her co-workers Ardie Valdez and Grace Stanton file a sexual harassment lawsuit against Ames and Truviv. When a body lands on the sidewalk, all the ingredients for a delicious and timely thriller are on the table.

What Chandler Baker serves up in “Whisper Network,” her adult debut, is part soapy shocker (one of the characters is keeping a very big secret) and part legal thriller (excerpts from depositions offer a glimpse into the third act). Think “Big Little Lies” meets the famous 2017 list of men in the media industry accused of sexual harassment. According to the journalist Moira Donegan, who created that list, “protecting women is a position that comes with few protections itself.” Baker, who practices law professionally, protects her protagonists like a pit bull defense attorney. 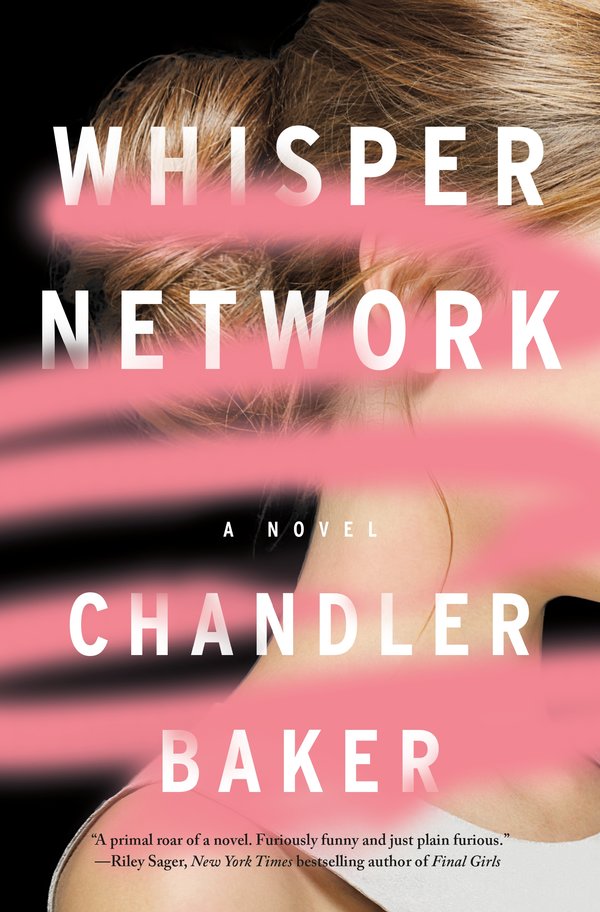 The bond of the wealthy corporate moms is solid. They speak in unison about acid facials, C-sections, spin class and sexism. They’re simultaneously pampered (Ardie Valdez loves UberEats) and put-upon (the new mom Grace Stanton is fed up with her breast pump). In several monologues, they make their collective case about the woes of privilege: “None of us had time, for anything it seemed. … Sometimes, we’d see a book hit the New York Times best-seller list with a promising title like ‘I Know How She Does It’ or ‘Overwhelmed.’ For a few weeks, we’d pass it between us, trying to use the advice like a trendy new diet plan. But for all of us, there were — how do the pundits put it? — institutional roadblocks.”

[ #MeToo is all too real. To better understand it, turn to fiction. ]

Although there’s “an invisible separation” between the men and the women of Truviv, the women in the workplace are by no means on the same side. Ardie, Grace and Sloane have empathy for their female colleagues on the “unicornlike search” for the perfect man, counting “every missed date, missed chance encounter, missed opportunity to meet someone with whom we might actually want to become a mother.” But the mom squad grapples with a childless Boston transplant, Katherine Bell, who’s single, pretty and hesitant to fight the Truvivian power. Then there’s the New York attorney Cosette Sharpe, who flies into Dallas to represent Truviv in the sexual harassment suit. Once upon a time, Sloane helped Cosette get her lucrative job. Now Cosette is flashing a Rolex and cross-examining Sloane about the affair she had with Ames 12 years ago. We know what Sloane thinks of these women — Cosette’s veins are “icy with freezer burn” and Katherine’s fingernails are “childishly short.” In a feminist novel where multiple women are chipping in to tell the story, it’s a little surprising that Baker hit the mute button on Katherine and Cosette.

The most compelling voice of all belongs to the insightful and pragmatic Rosalita Guillen, whose nocturnal cleaning schedule gives her a different window into the inner workings of Truviv and all its secrets. Rosalita’s life story is emotionally wrenching, and you long to know more about it. Her insights into the men and women of Truviv offer a reprieve from Paleo diets and office cake. You want to get back to the story, maybe even rewind the clock and see Rosalita cope with her nightmarish situation day in, day out. After all, every whisper network relies on people speaking up as individuals, sharing their experiences. The same applies to this “Whisper Network,” too.

Caroline Kepnes’s latest book, “Providence,” is now available in paperback. The Netflix series “You” is based on her novels “You” and “Hidden Bodies.”