Donald Trump was feeling envious. New York’s foremost narcissist — whose Trump Tower, encased in fool’s gold and bogus bronze, was the very definition of ersatz — hankered for what he regarded as the real estate racket’s crown jewel of social status. There it was, tauntingly in his face every time he swiveled his desk chair and glanced out the 26th-floor window of his Fifth Avenue office: the Plaza Hotel.

The imposing white chateau at 59th and Fifth, with its lordly views of Central Park, designed by the Gilded Age maestro Henry Janeway Hardenbergh, dominates the most desirable corner of the most dynamic city in the world. Trump finally bought it in 1988 for roughly $400 million, every penny of it borrowed. In a full-page ad in New York magazine, he boasted: “For the first time in my life, I have knowingly made a deal that was not economic. I haven’t purchased a building, I have purchased a masterpiece — the Mona Lisa.” It took him four years — the equivalent of a full presidential term — to drive the Plaza into bankruptcy.

The era of funny money had begun. But first there had been the glory days. In its early years, the Plaza, 18 stories high and a block wide, towered over its neighbors like a tuxedoed King Kong. A great hotel is a theater of dreams, and Julie Satow, a journalist who covers New York real estate, digs deep into the forces that took the Plaza from a living center of aspiring social connection tied to the fortunes of American high society to its present status in an atomized era of pitiless transactional globalism.

The Plaza in its current incarnation first opened its bronze revolving doors in October 1907, and the early clientele’s names — Vanderbilt, Wanamaker, Duke — still conjure up the rustle of silk and the sheen of a top hat. The hotel had been built on the site of an earlier (and also quite grand) establishment by two business partners, Bernhard Beinecke, a prosperous German butcher, and Harry S. Black, a dashing adventurer and aspiring impresario who, though short of stature, was catnip to women. They became the Ian Schrager and Steve Rubell of the age, swiftly turning the Plaza into a magnet not only for socialites but for movie stars, tycoons and world leaders, with a brisk trade in cosmopolitan charlatans. 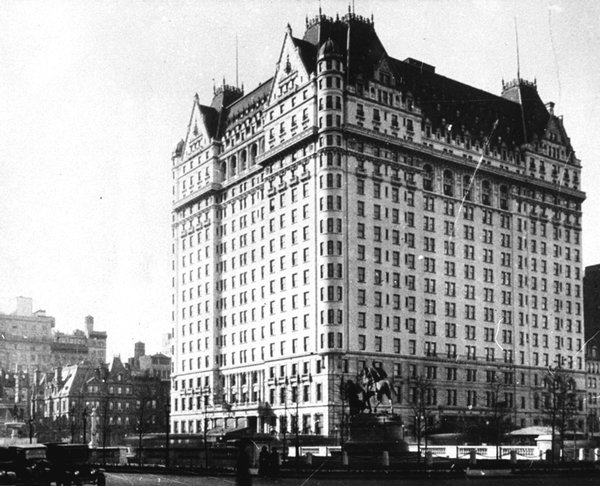 There were also the ladies who came to be known around the hotel as the 39 widows. These were rich dowagers like Clara Bell Walsh, famed for inventing the cocktail party, who moved into palatial suites and never moved out — until they moved on. These ladies had their own posses of social secretaries, private nurses and small yapping dogs. They never lacked for service. At its humming height, Satow tells us in one of her dazzling fact riffs, the Plaza employed a staff of 1,500, “including 50 each of chambermaids, housemaids and bell boys; plus 200 waiters, 75 laundresses and 25 porters. There were also 20 bartenders, 10 wine cellar men, 15 barbers and, in later years, two men whose sole job was dusting the chandeliers and another who patrolled the hallways stamping ashtrays with the double-P Plaza logo.”

Over the decades, the Plaza myth was created as much by writers as by its clientele. It’s hard to stroll by on a sweltering August afternoon without thinking of Fitzgerald’s Jay Gatsby inside, telling Tom Buchanan that Daisy never loved him. Or on a crisp November night to hear the ghostly strains of Peter Duchin’s orchestra playing for the swans and swells at Truman Capote’s Black and White Ball. Satow, of course, offers a pungent chapter on the Plaza’s most popular literary avatar, Eloise, and her creator, the volatile diva Kay Thompson.

To me, the Plaza irresistibly represents my days at Vanity Fair in the ’80s, when its swanky Grand Ballroom played host to countless black-tie benefits chaired by Wall Street trophy wives, with their hungry eyes and anorexic shoulders. The leafy fronds of the marble-columned Palm Court and the serene strumming of its harpist always made me feel as if I were having afternoon tea on the Titanic. And in a sense I was.

Because the story of the Plaza is inevitably a story of boom and bust. To want to own it meant you had to dream big, and big dreams have a way of becoming big nightmares. Harry Black’s dream ended in 1930. Unlike the more prudent Beinecke, he had lived the Jazz Age as large as his guests. When Wall Street crashed in 1929, he was overextended; within a year, he had shot himself in the bedroom of his Long Island mansion.

Alternate saviors and wreckers followed Black as the Plaza battled to stay afloat through Prohibition and two world wars. Conrad Hilton, who bought the hotel in 1943, bet that World War II’s eventual end would be a boon for hotels and was proved right as the Plaza’s lobby and bars bustled with khaki uniforms and champagne reunions. Less successful was Roger Sonnabend, son of the drab financier A. M. Sonnabend, who in the frenzy of a midlife crisis began wearing beads and Nehru jackets and embarked on a series of desperate modernizations. He turned the Edwardian Room, where big-shot conversation had rumbled between dark-paneled walls, into the pastel-curtained Green Tulip, a change excoriated by all.

By the time the Plaza was acquired by the Qatar Investment Authority in 2018, its indomitable glamour had seen a free fall of successive foreign overlords. They included a Saudi prince teaming with a Singaporean billionaire, an Israeli speculator who carved up the hotel into condominiums and retail spaces, and an Indian con man who negotiated his financial exit from the most evil-smelling hospitality suite in the world, Delhi’s notorious Tihar Jail. A boutique hotel remains, but the condominium suites are mostly silent, acquired by iffy oligarchs and dubious emissaries from go-go emerging markets.

It’s galling to have to admit that Trump is the owner who leaps most vividly from the pages of this entertaining history, just as he does from cable TV. He announced his first wife’s appointment as the Plaza’s new president in what we have come to know as his unique idiom of insulting hype: “My wife, Ivana, is a brilliant manager. I will pay her one dollar a year and all the dresses she can buy.” There is compensating glee to be derived from identifying the characters who continue to inhabit Trump World or have been replaced by their replicas. It was Thomas Barrack, later chairman of the Trump 2016 inaugural committee, who, as The New York Times put it, “played Donald like a Stradivarius” on behalf of the Westin group and got him to shell out more than 25 times the hotel’s expected earnings. The precursor of the Trump fall guy Michael Cohen is the equally abject Abraham Wallach, who, in a familiar trope, won Trump’s attention by going on TV as a competing real estate developer and ridiculing the price Trump had paid for the Plaza. Trump hit him with a $250 million lawsuit for defamation but then, with his unerring nose for exploitable moral weakness, hired Wallach and turned him into a pummeled foot soldier. Like Cohen, Wallach would do anything for his boss’s approval, including — in a scene worthy of Mel Brooks’s “The Producers” — hiding in a secret room adjoining the Plaza’s Vanderbilt Suite to eavesdrop on a rival’s negotiations with a bank.

The other great character in this teeming cast is not a billionaire but a union leader. Peter Ward represented the 35,000 bellmen, doormen, banquet waiters and maids who made up the powerful New York Hotel and Motel Trades Council. By the time he enters the story, we’re thirsting to hear more about the downstairs life of the Plaza. I wish Satow had dwelt more on the lives of that pyramid of toiling housemaids, laundresses, bellhops and waiters who kept the Titanic afloat. Just as the flashy museums and universities of the United Arab Emirates are built on the backs of abused migrant workers, the Plaza’s luxury was underpinned by many decades of exploitation.

Some employees in Harry Black’s champagne era earned as little as 83 cents a day, with 18-hour shifts and no paid days off. The steel girding that built the Plaza, 10,000 tons of it, was hammered by the rough, tough rivet gangs, “cowboys of the sky,” who in 1906 exploded with resentment and beat a hated supervisor to death as he stepped shakily out onto the scaffolding on the eighth floor.

A century later, it was Ward who took on the Israeli owners, El Ad, when they arrogantly assumed they could carve the Plaza into condos and dispense with 900 union jobs without a fight. His “Save the Plaza” campaign was conducted with such inspired persistence and political guile that he kept the jobs of 350 union employees, won an increased severance package for the rest and preserved the Grand Ballroom, the Oak Room and the Palm Court from wanton destruction.

Today the Plaza is a grand-facade boutique hotel and retail space under pretentious deluxe apartments owned by the kind of affluent global flotsam who fake their children’s SAT scores. Yet her Serene Highness of 59th Street sails on, confidently awaiting the next custodian of New York’s social dream.

Tina Brown is the former editor of Vanity Fair and The New Yorker, and the author of “The Diana Chronicles.”