Last year was a big one for the poet, playwright and performer Inua Ellams.

His version of the Chekhov play “Three Sisters,” which he set in Nigeria during the Biafran war, opened at the National Theater in London. So did another one of his plays, “Barber Shop Chronicles,” which went on to tour in the United States. His book “The Half God of Rainfall,” which comes out in the United States on Tuesday, also made it to the stage.

And Britain, where he moved when he was 12, rejected his application for citizenship.

For Ellams, who was raised in Nigeria, England and Ireland, weaving across borders and boundaries is second nature. He turned from visual art to writing at a young age because he couldn’t afford paint.

“I could get paper and pen,” he said during a Zoom interview. “Because I’d spent so much time focused on imagery, when it came to writing poetry, I just wrote down the images in my head with words.”

Now, Ellams, 35, is probably best known for his plays and is trying his hand at writing for television. Like its author, “The Half God of Rainfall” is hard to put in a neat little box: It is an epic poem about Greek and Yoruba deities, as well as the half-god son of Zeus whose special power is killing it at basketball.

“They called it Battle Field, The Court of Kings, The Test,” Ellams writes, “for this was where warriors were primed from the rest, / where generals were honored and mere soldiers crushed. / Basketball was more than sport, the boys were obsessed.”

Ellams was born in Jos, Nigeria, to a Muslim father and a Christian mother. His father, who worked in a business that exported Nigerian food, began to openly question his faith after making a pilgrimage to Mecca and seeing things there he did not agree with. The family started receiving threats. Attempts were made on his father’s life. Someone tried to burn down their house. They fled to Lagos, but the violence followed them there, so they moved to London. 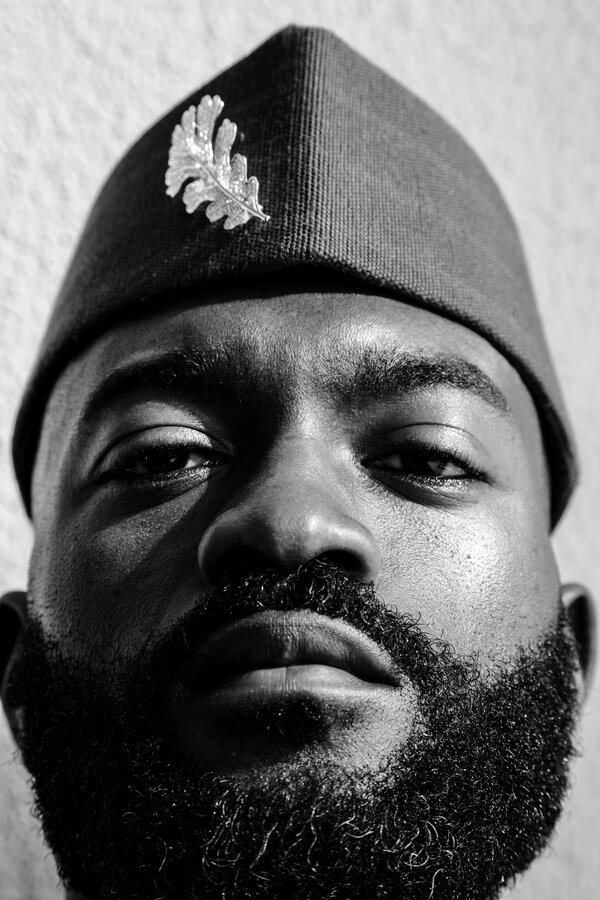 When Ellams was 12, he started playing basketball to get the attention of a girl who was obsessed with African-American culture, he said — he still plays pickup games twice a week. (“I was always point guard,” he said. “Which means I brought the ball up and passed it to the bigger guys.”) The family also spent three years in Dublin, where he arrived as the only Black boy in his school.

But when it came time to apply to college or art school, Ellams was classified as an overseas student, so he couldn’t afford to go, and his formal education ended with high school.

He spent the next several years focusing on poetry, much of which he performed at open mic nights in pubs, festivals and theaters. He has published four poetry “pamphlets,” with just a dozen or so poems in each, but his first full-length collection, “The Actual,” will be published in the United States next month. It started as a poem whose title is an expletive followed by “Donald Trump.” When it resonated with audiences, he turned it into a series of similarly titled poems on Nelson Mandela, Nestlé and Covid-19.

Ellams still performs. Earlier this month in London, he began a socially distanced run of his one-man show “An Evening With an Immigrant,” in which he tells his family history with a mix of poetry and improvised notes, making the show a little different every night. One story he recounts is how his one-man show “The 14th Tale” resulted in an invitation to Buckingham Palace, just in time to be added to his application for “indefinite leave to remain” in the country. (His application was approved.)

He does not consider himself an actor. “I can tell stories,” he said. “I can’t make a full transformation into another human being.”

But in Ellams’s writing, the rules are different.

While researching Greek mythology for “The Half God of Rainfall,” he was struck by something he had not learned about those tales in school: Zeus was a serial rapist. Rather than abandoning the story or glossing over it, he made women’s sexual trauma central to what he was writing. His main character, the basketball star Demi (as in demigod), was conceived when Zeus raped a woman named Modupe.

When the book came out in Britain last year, Ellams wondered if he would be criticized for writing about women’s sexual trauma. He had poured himself into getting it right, he said, speaking with his three sisters and sharing the text with female friends, some of whom had been victims of sexual assault.

“I questioned why I wanted to write this story,” he said. “It’s because I was in a position of power, and I wanted to use it to discuss how men abuse power.”

“Half God” is unusual not only in its subject matter but also in its form. It’s written in rhymed triplets, a version of a form employed by the poets Chaucer and Dante called a terza rima. But the book doesn’t read like something based on a strict formula; it reads like a play.

The book also likes to have a little fun. In a section that lists half gods who have taken their talents to the N.B.A., Ellams writes that Michael Jordan “did / what no one had dared — flew — on the court. With no song, / charm or spell to cloak his flight! Live television!” Another example: “Rainbow Snake Goddess? Dennis Rodman’s aunt.”

Indeed, the idea for “Half God” didn’t come from high-minded dreams of harnessing Greek mythology, but from a boyhood memory of a friend who could spit high into the air and then catch it in his own mouth. In a poem, Ellams called the friend the half god of rainfall. From there, the phrase “make it rain” brought him to basketball.

That mix of playful and serious in “Half God” is much like its author. Ellams is meticulously organized, according to his friends, a valuable skill given his multitasking tendencies. His work often explores themes of masculinity and colonialism, Blackness and migration. His quest for British citizenship continues.

He also has an encyclopedic knowledge of Marvel Comics and a taste for lame jokes. Kayo Chingonyi, a friend and fellow poet who shares that fondness, offered an example: “What’s brown and sticky? A stick.” Sitting in his living room, in front of an Ikea bookshelf piled with poetry magazines, two basketballs and a decorative bottle of expired Nigerian Guinness, Ellams heard the familiar joke and responded with an impish chuckle.

“He sometimes says, ‘I’m not a writer, I’m a thief,’” said Kate McGrath, his friend and longtime producer. “I think that curiosity and openheartedness, and interest in listening to and absorbing other people and other cultures is probably what he describes as being a thief. But I would describe it as being an artist.”