The endless search for treasures in the attic. As TV auctioneer Philip Serrell reveals in a sparkling memoir, his is a cut-throat business – not least relatives who fight over heirlooms and prove… Where there’s a will there’s a row!

WHAT AM I BID? MY LIFE UNDER THE HAMMER

My hope is that Philip Serrell will do for the antiques trade what James Herriot did for cows’ bottoms, as his memoir contains every ingredient for similar popular success.

Instead of the Yorkshire Dales, we are in Malvern, in the beautiful Welsh Marches. I lived slap-bang in the middle of this unspoilt landscape for 20 years — and in the apple orchards and hop yards it is as if time has stopped still.

Serrell sets off in his dodgy car that smells of hot oil — ‘my very own personal scrapheap challenge’ — to visit a Georgian farmhouse.

He is there not to worm sheep or castrate bulls but to examine 18th-century top-quality mahogany dressers and dining tables, which have been gathering dust for generations and may by now be worth a fortune.

Serrell also undertakes house-clearance duties. There’s always a chance that among the mountains of old cabinets, china, silverware and jewellery, a treasure will be unearthed, such as a Victorian commode or an Art Deco sculpture of a dancing lady — one such made £90,000. 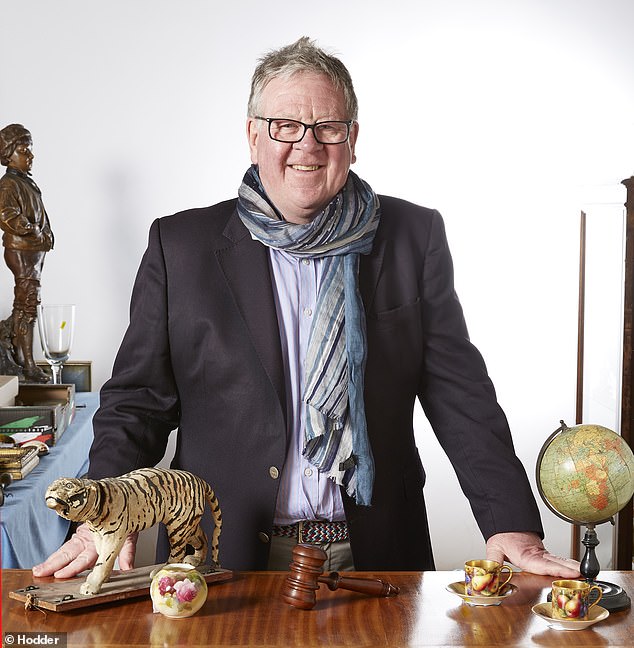 Philip Serrell’s (pictured) memoir reveals how he ended up in auctioneering and the bustle of the saleroom, which he describes as ‘a theatre of drama with an ever-changing cast of actors’

Serrell was born in Worcestershire, the son of a tenant farmer. ‘I had seen my father scratch a living from the land; it was a lot of hard work and I felt that a business owing its fortunes to the weather was not for me.’ Fair enough. Also, ‘who wants to be ankle-deep in manure?’ (James Herriot, for one.)

After qualifying as a PE teacher at Loughborough in Leicestershire, and discovering this meant rather too much running about in the rain blowing a whistle, Serrell joined a firm of Worcester auctioneers.

He resisted the agricultural side of the business (counting sheep; selling tractors and old lorries), preferring the bustle of the saleroom which is, he says, ‘a theatre of drama with an ever-changing cast of actors and props.’

In What Am I Bid? we therefore encounter dealers in deadly competition, who closely examine lots they aren’t interested in to throw rivals off the scent. Serrell describes ferocious relatives battling over heirlooms — where there’s a will there’s a row.

Then there are the travellers who house vast collections of Royal Worcester porcelain, lavishly decorated with fruit and ‘acid gilt’, in their caravans. Two vases fetch £12,300 in the saleroom. 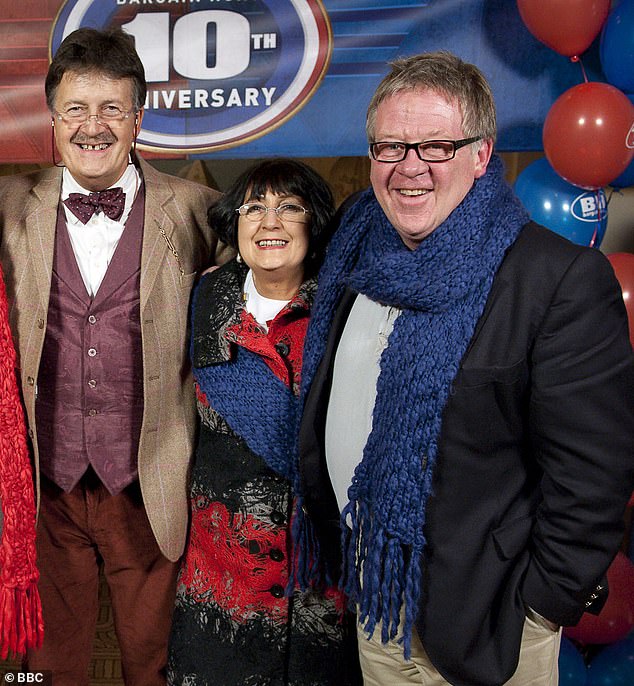 The TV auctioneer (pictured left, with Tim Wonnacott and Anita Manning) details the tense moments in his job, including how ferocious relatives battle over heirlooms

Serrell clearly loves the items of quality passing through his saleroom: a bureau with bracket feet, finely-cast brass drawer handles and carved escutcheons (£46,000); a Gujarat mother-of-pearl religious vessel (£77,000 — estimated at only £12,000); a Tudor embroidered work basket (£19,000).

It is interesting how taste changes. Factory and office furniture from the 1960s once went direct to the skip, yet now G-Plan and tubular-steel chairs are ‘vintage’ or ‘retro’ and highly collectable.

‘No self-respecting apartment would be without them,’ says Serrell, who sold a job lot of ‘mid-century’ wardrobes from a Loughborough University hall of residence for an astounding £40,000.

What no one wants today is brown furniture — the oak and mahogany wardrobes and cupboards that crammed our grandparents’ homes. These items have ‘much more value as firewood than as antiques,’ says Serrell sadly.

I once bought an unwanted lovely marble-topped Edwardian table from him for £95. Meant for a bedroom, in the days when a maid carried in a bowl of hot water for washing, I use it in the dining room, for spare bottles of wine and platters of cheese.

We all want to find a bargain, which is the secret of the many TV shows in which people poke around in attics or junk shops. 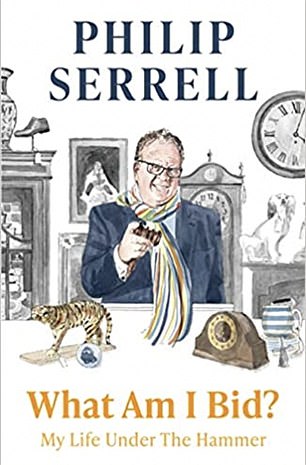 In his book, Serrell says he first qualified as a PE teacher at Loughborough but then joined a firm of Worcester auctioneers

Serrell, in his trademark scarf, is the resident expert on many: Bargain Hunt, Antiques Road Trip, Celebrity Antiques Road Trip… Road Trips With Antique Celebrities — by the time these are repeated in the middle of the night (when I watch), participants can even be dead, e.g. Nicholas Parsons or Basil Brush’s Mr Derek.

As a sort of celebrity himself, Serrell once came to our town to look at people’s rubbish for charity.

What I recall is his grumpy face — and no wonder. The poor man had to put a price on the likes of tortoiseshell tea caddies with the tortoiseshell missing, chipped vases, battered saucepans, reproduction copper-effect kettles, chairs upholstered with fake zebra skin, forged Beatles’ autographs and a portrait of the Queen that, upon inspection, was ‘Bette Midler wearing a crown’.

Serrell is laugh-out-loud funny about human greed and eccentricity: there’s the man who amassed a huge collection of Kilner Jars, the total value of which came to £20.

And the dealer who turned up for a bankruptcy sale expecting cheap vats of sweets, only to discover what was on offer were 850 three-piece suites.

I winced to learn about the occasional accident — somebody once paid a mint for a pair of Regency glass candlesticks, placed them in the boot of his car, slammed the lid down, snapping them clean in half: ‘The symmetry of the break was almost perfect.’

No dates are given, but the impression is that Serrell (a sitcom role made for David Jason) has been banging his gavel for half a century.

When he started, it was hand-written sales sheets, carbon paper, transactions in hard cash. ‘In those days, trust and cash spoke volumes in the auction world but, sadly, they have long since gone.’

The modern saleroom is replete with strict rules and regulations. ID checks are required. Accounts are settled by bank transfer. Guineas have gone. Computers prevail, with sales advertised abroad, internet bidding platforms and photographs of lots online — no need for a glossy printed catalogue.

‘Suddenly, Malvern had entered the international art world,’ Serrell says, leaving me with no option than to take his word for it.