In January 2017 a comic strip series written by the journalist Jake Halpern and illustrated by Michael Sloan debuted in this newspaper. It ran until October of that year , and won its creators the 2018 Pulitzer Prize for editorial cartooning. “Welcome to the New World” is a reported work that follows a family of Syrian refugees who arrive in America on the eve of Donald Trump’s election. This real-life story is remarkable for many reasons, including the groundbreaking context of its publication: It appeared week after week in the Sunday Review under the rubric of Opinion. Its status there as a regular feature, sharing real estate with prose pieces, offered a striking and unusual showcase.

The series has now been adapted and developed for WELCOME TO THE NEW WORLD (Metropolitan/Holt, $21.99), an engaging narrative between covers that offers an even more intimate look at the Aldabaan family’s struggles, both personal and bureaucratic, to make their lives work in America. When the series appeared in the newspaper, Halpern decided to obscure the family’s location and real names because of a terrifying death threat that brought the F.B.I. to their home. Here, the actual names and city are specified, and we spend months following Ibrahim and Adeebah and their five children as they try to settle in and around New Haven, Conn. Ibrahim eventually finds work at a Friendly’s and his teenage son, Naji, at a Dunkin’ Donuts.

“Welcome to the New World” treats Naji — sensitive, charismatic and complicated — with the most care and attention, presenting a truly multifaceted character; it reveals, more than halfway through, a moving back story that takes place in Homs, Syria, in 2011, which explains his often remarked upon maturity. The narrative succeeds in part because of its slow reveal; readers connect with the family members as personalities before we begin to see the miseries of their past. 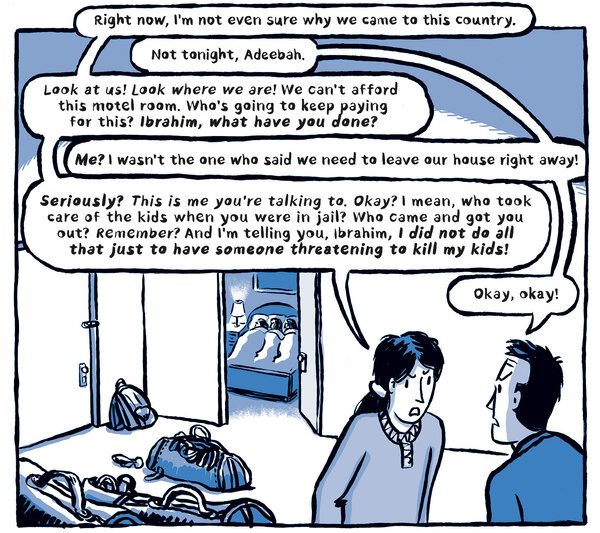 Sloan and Halpern deliver a story that fully inhabits its comics form, and breathes with an easy visual elegance. They deploy the thought balloon, a standard comics device, with unusual efficacy, using it to create free-floating narration that uncovers multiple points of view throughout, including from peripheral characters. The balloon presents the intrafamilial tensions and reveals the mind-set of the Aldabaans in their interactions with Americans. For the latter, we often witness a useful split perspective, revealing, for instance, how nervous their volunteer sponsors (from Integrated Refugee and Immigrant Services) also are. One laugh-out-loud episode centers on a volunteer escort’s chagrin after she asks Naji to change into a dress-code regulation collared shirt for his first day of public school, only to discover that it is “Pajama Day.” (Naji himself is amused.)

Sloan, an accomplished illustrator who also creates his own comics, organizes simple but powerful layouts to emphasize emotion, and his loose, fluid black line, minimal but energetic, lives on pages colored exclusively with blue. As in celebrated graphic narratives like Alison Bechdel’s “Fun Home,” the book uses one color, an effect that stylizes and distills the images. The “world” of the title, which evokes the famous ending of “The Great Gatsby” (where immigrant Dutch sailors spy the “fresh, green breast of the new world”), refers not only to a new social environment and a new way of life, but also to the devastated state of contemporary affairs that produces the flight of refugees globally. And it refers, of course, to the new world ushered in by the rise of Donald Trump. “Excuse me,” Ibrahim asks Lara, an American volunteer, on Nov. 8, 2016, their first night in the country. “What happens if he wins?”

The precarity of the world is the subject of the English artist Stanley Donwood’s BAD ISLAND (Norton, $18), which explores an unnamed island over millenniums, from a primeval time of megafauna to industry, war and nuclear disaster. “Bad Island” joins a rich tradition of socially conscious (and often socialist) “wordless novels,” executed in woodcut and printed in black and white, which bloomed in the 1920s and ’30s and were made famous by artists such as Lynd Ward; Donwood, known for his distinctive album art collaborations with Radiohead, works in linocut. Here we see civilization emerge and destroy itself. And in this moment, “Bad Island” feels more prophecy than fable.

But it is to Donwood’s credit that he makes the actual reading experience of “Bad Island” a pleasure. The vertically oriented compositions — sky, land and water — consistently feature gorgeously patterned ocean swells; Donwood balances abstraction and figuration, and builds rhymes across his pages. He also offers tiny details that reward an attentive viewer, as in the numerous small creatures lurking about, like the memorable rat surfing the waves on a fallen tree branch. Tiny eyes emerge out of the thickets of forest, easily overlooked on first glance. And there are moments of real suspense: Where will it end? Perhaps most strikingly, the narrative plays with the elasticity of time between panels, sometimes slowing down dramatically, sometimes speeding up.

If Donwood creates a stark allegory of the planet by focusing on one island, Matt Furie’s MINDVISCOSITY (Fantagraphics, $39.99) displays a different kind of world-building, in which a colorful, playful, proliferative pop-culture-fueled vision is edged with humor and darkness in equal and uneasy measure. You can’t blame Furie for feeling dark: This is the poor cartoonist who created Pepe the Frog, in his 2005 alternative comic book about four stoner friends, “Boy’s Club.”
He then saw his benevolent, laid-back character — known for peeing with his pants all the way down — become a meme and an inescapable far-right hate symbol. (That transformation is detailed in the excellent new documentary “Feels Good Man.”)

Featuring a luxurious puffy cover complete with trippy holofoil title lettering (my 1-year-old couldn’t stop playing with it), “Mindviscosity” is an art book more than a comics narrative, full of finely textured human-animal hybrids and other surreal entities, including several images depicting the death of Pepe-like figures (Furie officially “killed” his most famous character in a 2017 comic strip). The space it affords Furie to reclaim himself as an artist is a small measure of rebuke to the forces that loom ominously in our new world.